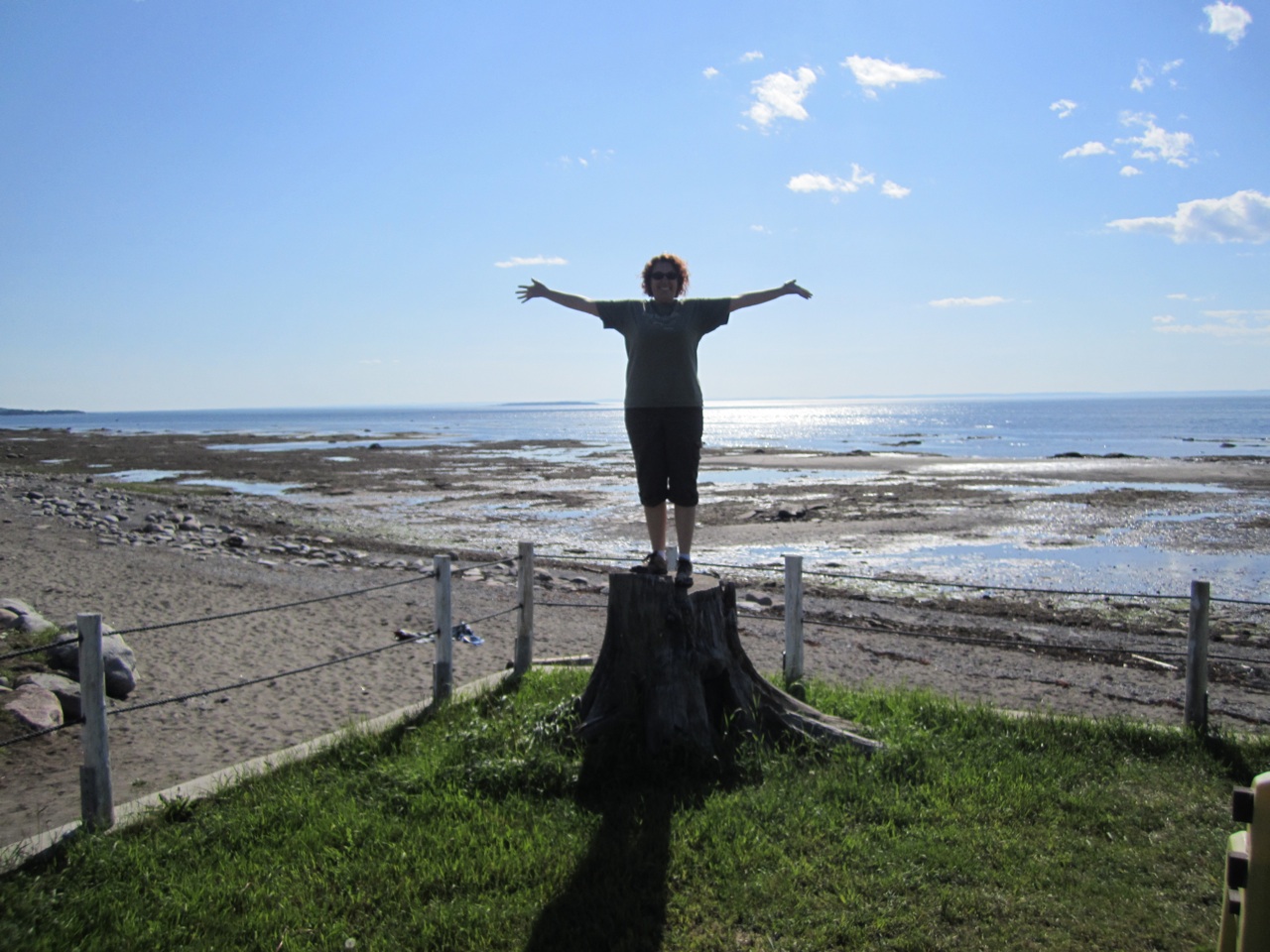 Brenda And The Beach Area At The Campground

We were in Trois Pistoles, Quebec, Canada for a couple of nights, just passing through.  It’s a very small town.  Just one grocery and a nice looking church.

It’s located on the St. Lawrence.  It gets it’s name from the French name Pistoles, which was given to a Spanish coin in use in 1537.  The coin gave its name to the town were according to local legend, an explorer lost a goblet worth three pistoles in the river.

I know, not a terribly interesting story, but it is what it is.

The campground that we stayed at was a lovely campground with a nice beach area.

We didn’t do much here.  Not much really to do.

David got out his chip repair kit and fixed a chip in our friends rv windshield.  He had to use the umbrella and towel because you can not let any UV rays hit the repair until you are done.  As soon as you are done with the repair, then you let it sit in the sun and cure. 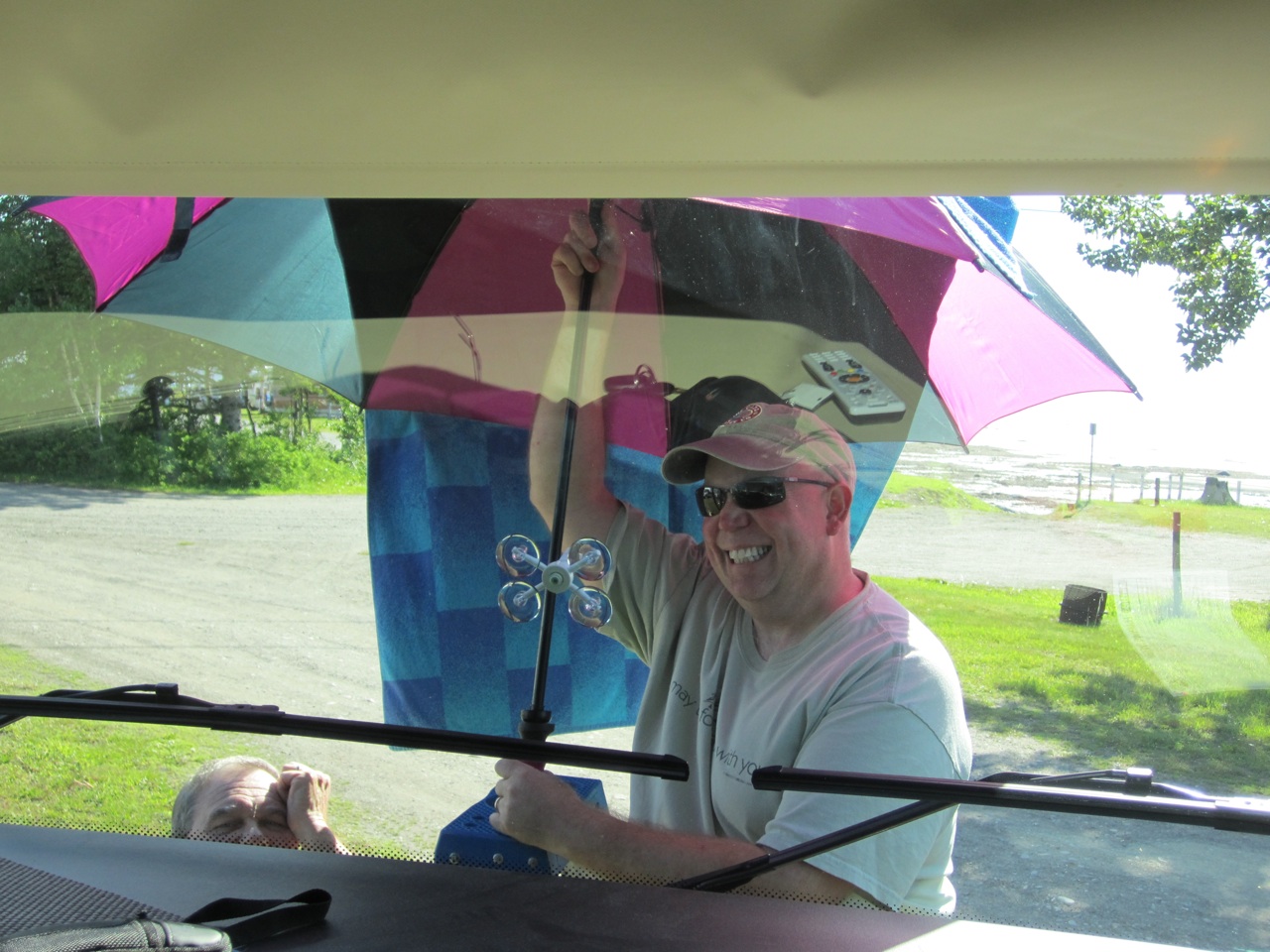 David Repairing A Chip In Our Friends RV Windshield 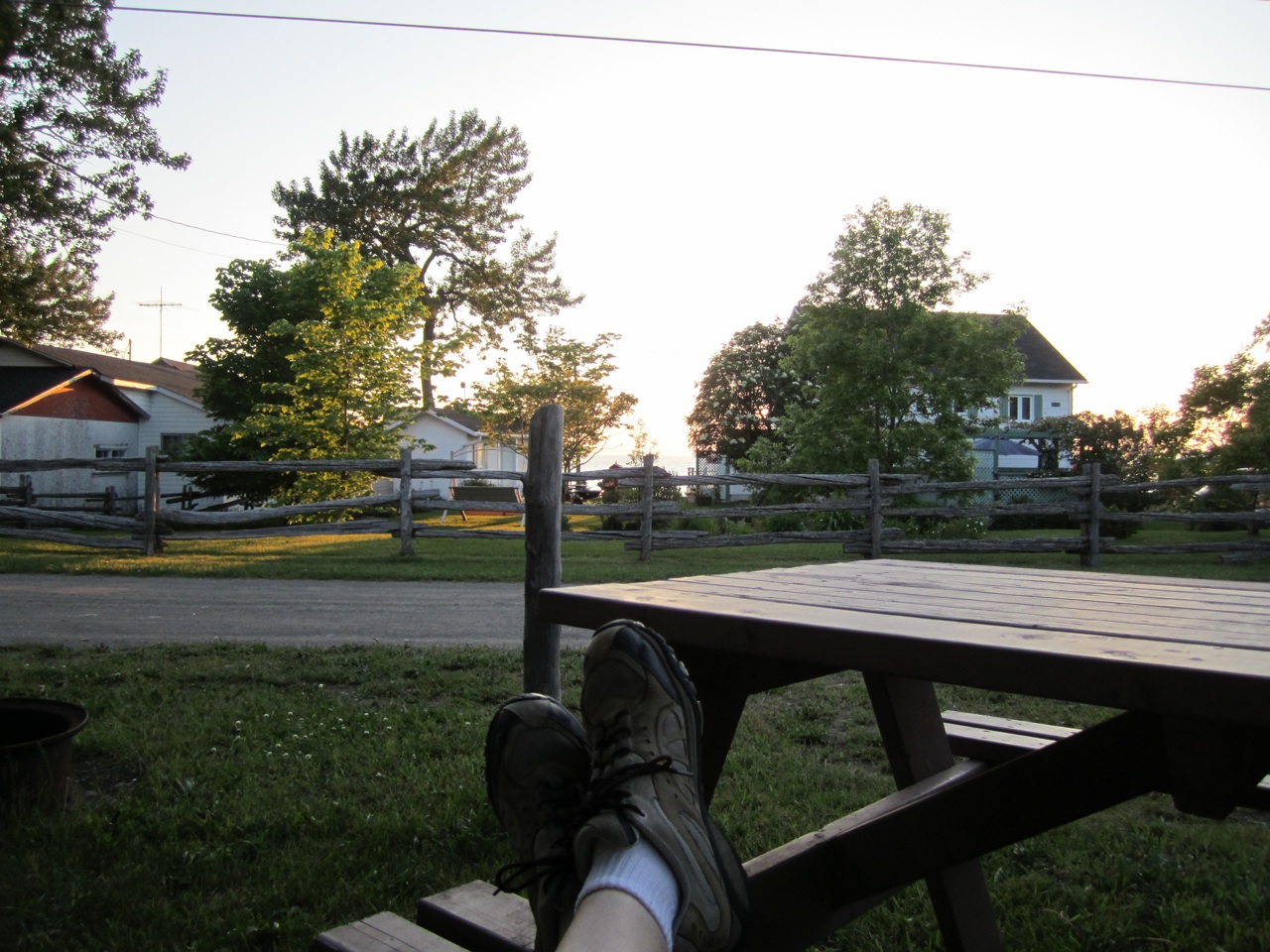 Brenda Enjoying The Nice Weather And Reading Outside

I took advantage of the nice weather and sat outside and read my Kindle. 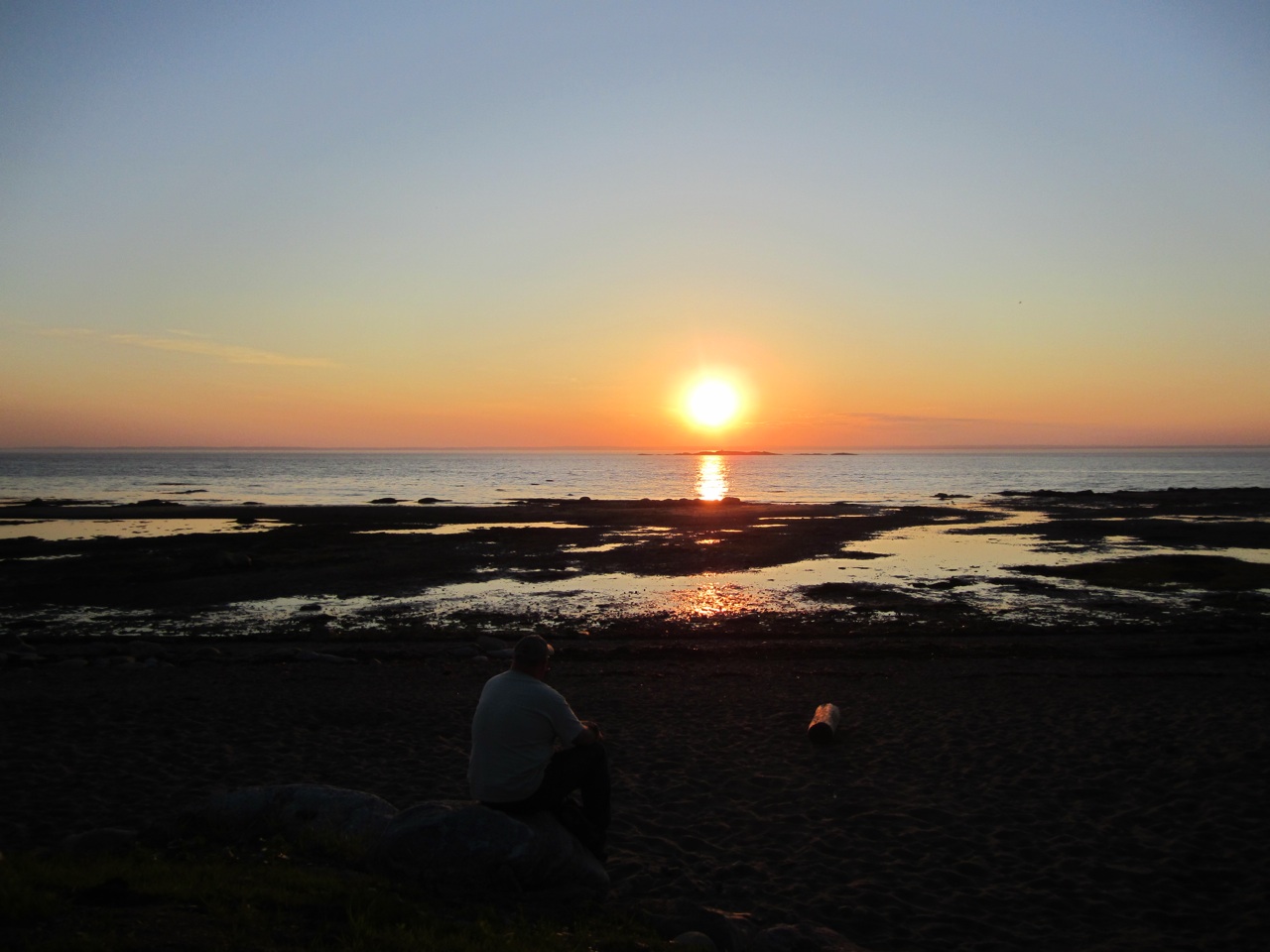 David Sitting And Enjoying The Sunset 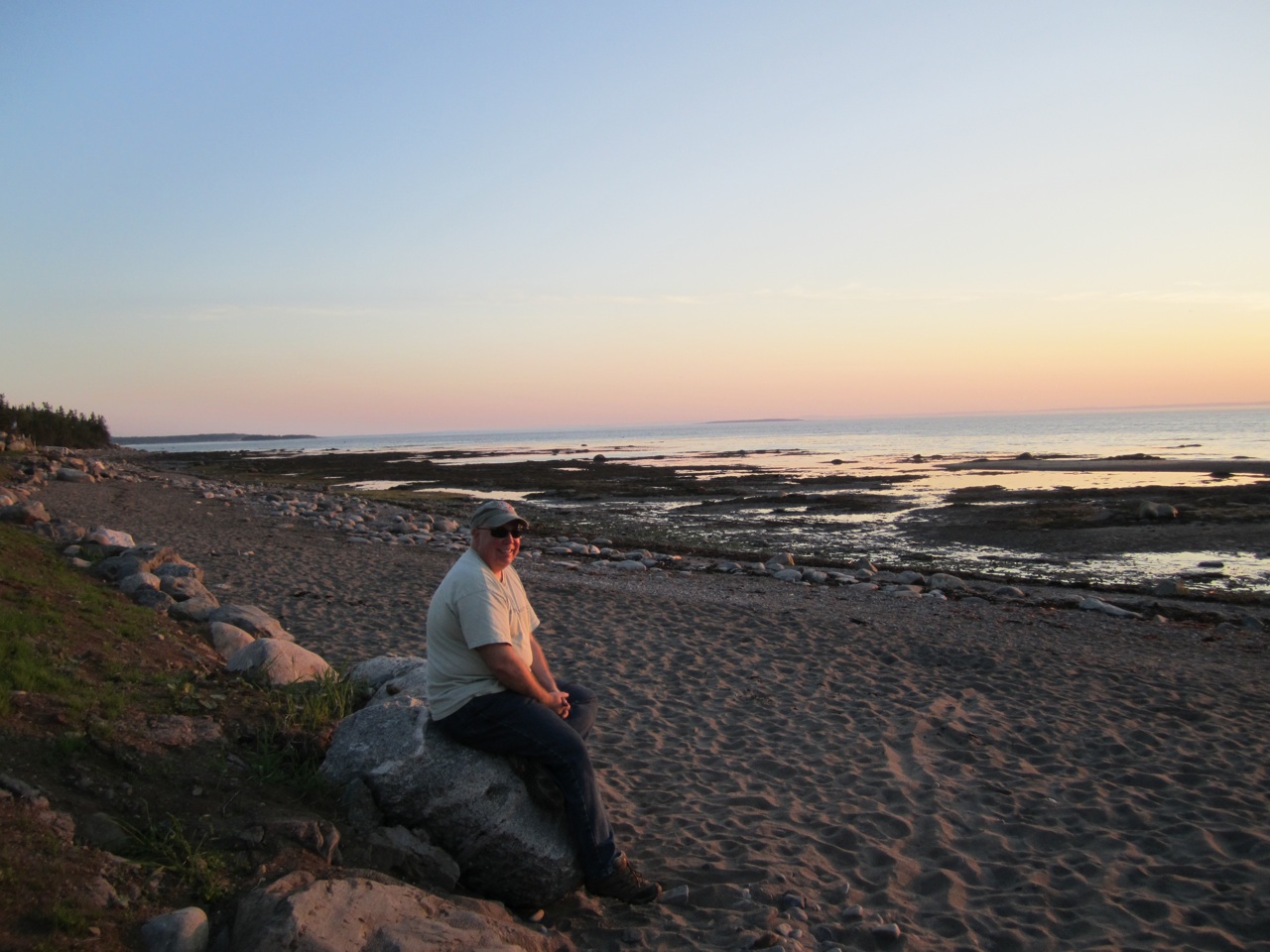 David Sitting And Enjoying The Sunset

They had beautiful sunsets over the St. Lawrence.   But I refer back to some of my previous posts when I say, “What sunset is not beautiful?”.

Sandy, Lana and Evelyn enjoying the beach at sunset.  What you don’t see are the bugs.  We all got bit up pretty good.  Except Sandy of course.  She was smart enough to put bug spray on.  Lesson learned.  We all suffered for days after.  And these weren’t your typical mosquito bites.  Oh no!  These were some sort of mutant bug that made your whole body swell up where ever they bit you.  You looked like someone had beat you up cause you had lumps all over your body. 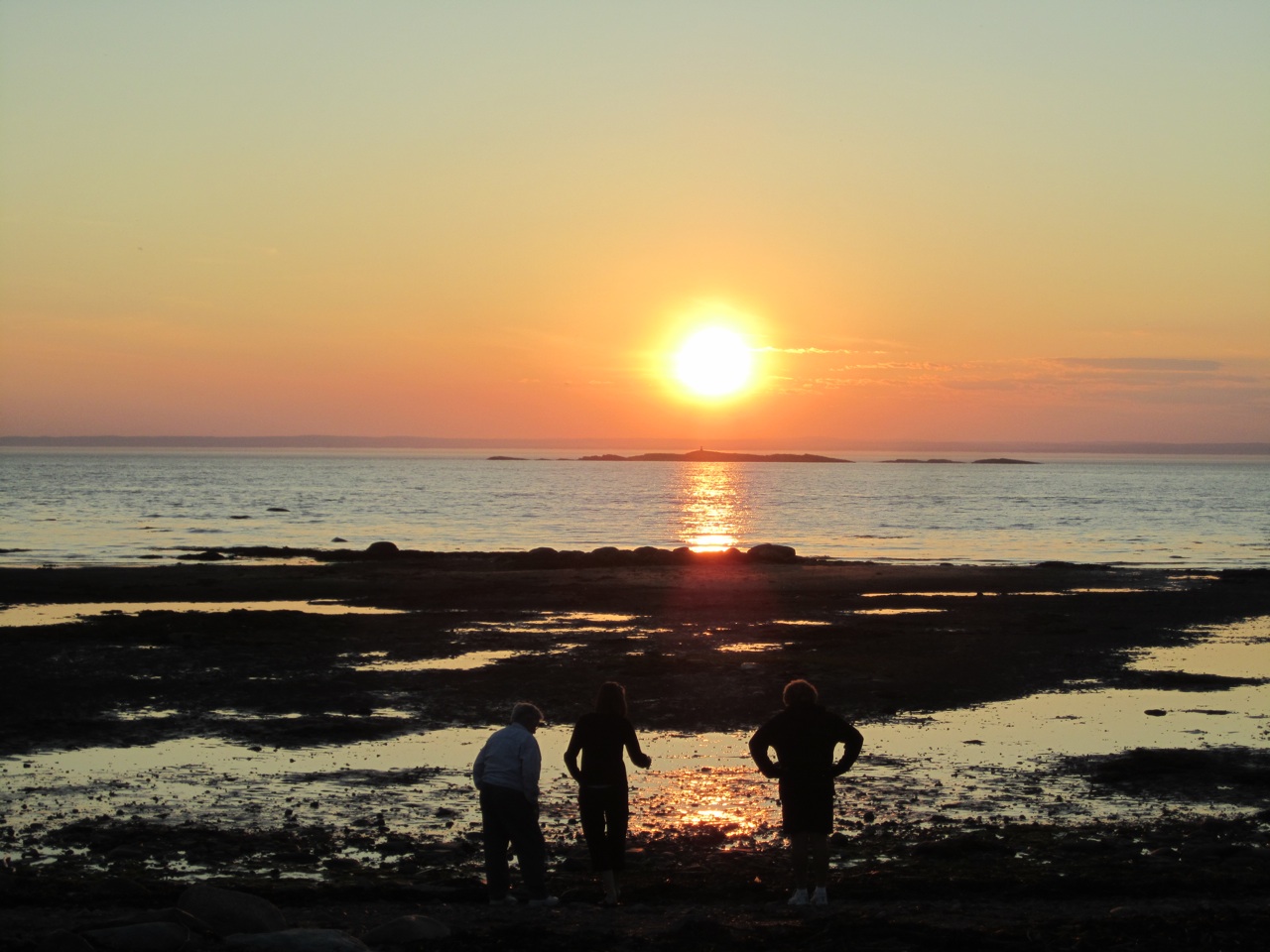 Sandy, Lana And Evelyn On The Beach At Sunset 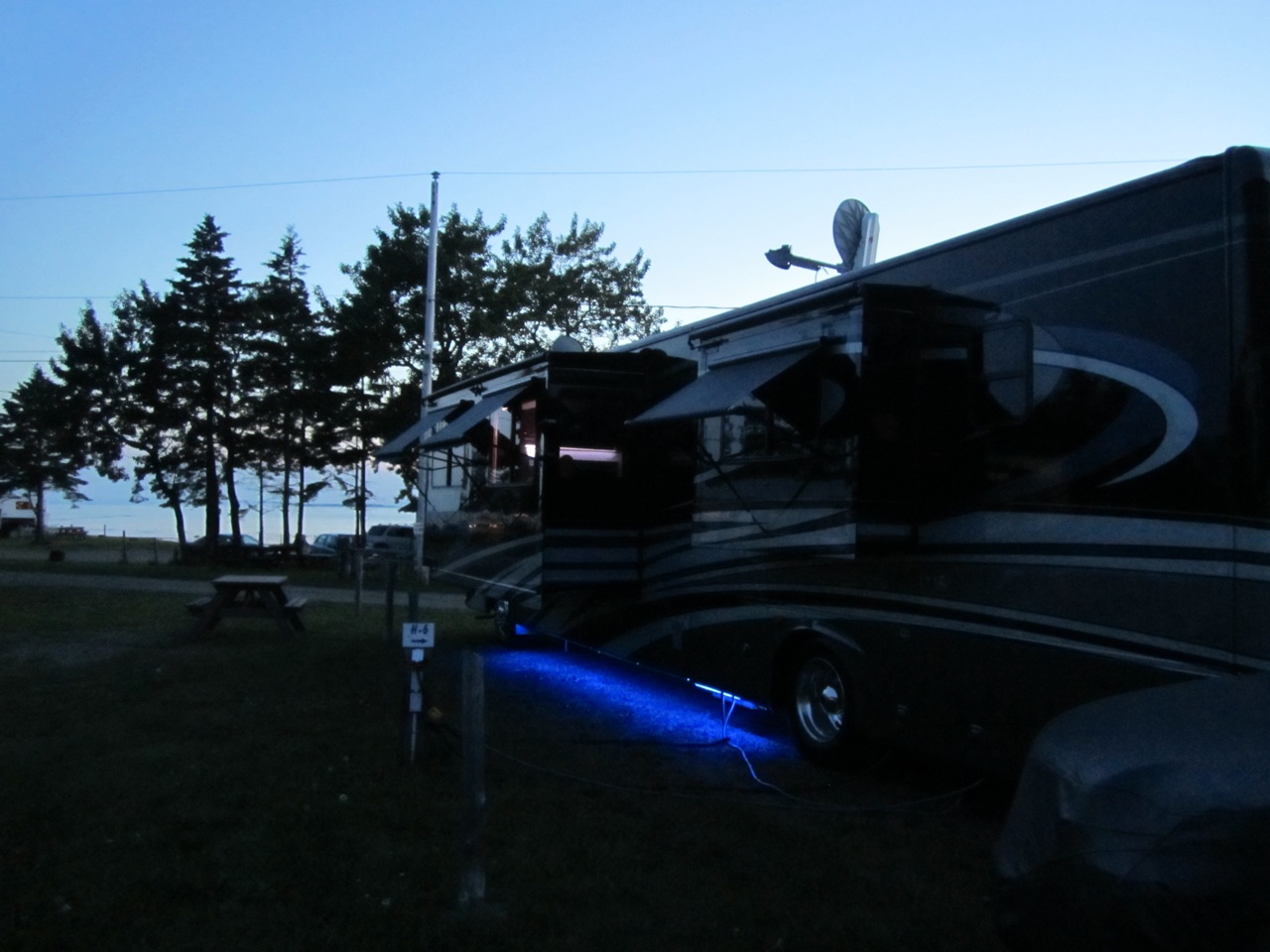 Our Coach At Trois Pistoles Campground

We called it an evening.

The next day we decided to tour around the town and see what they had to offer. 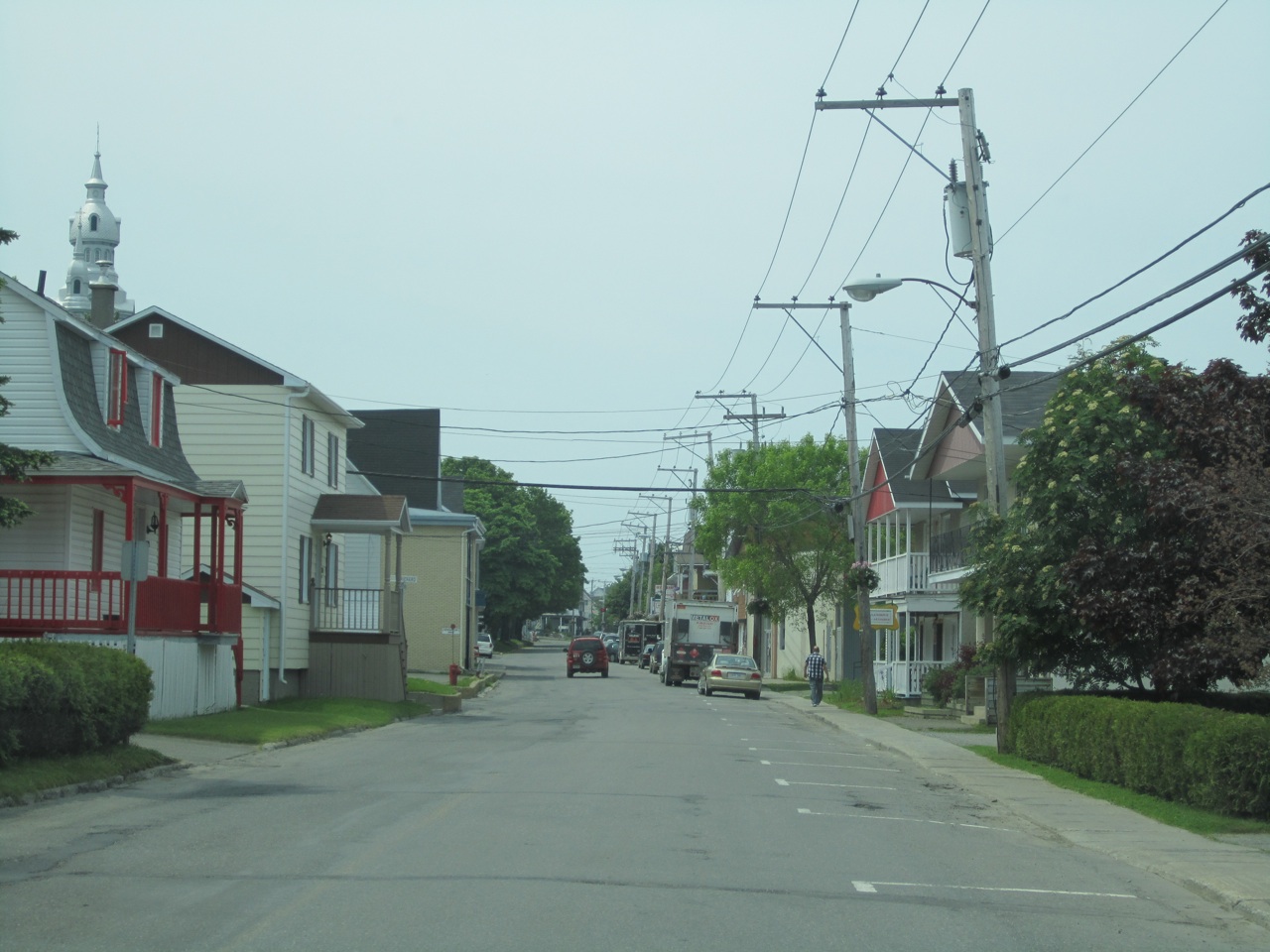 The Town Of Trois Pistoles In Quebec, Canada 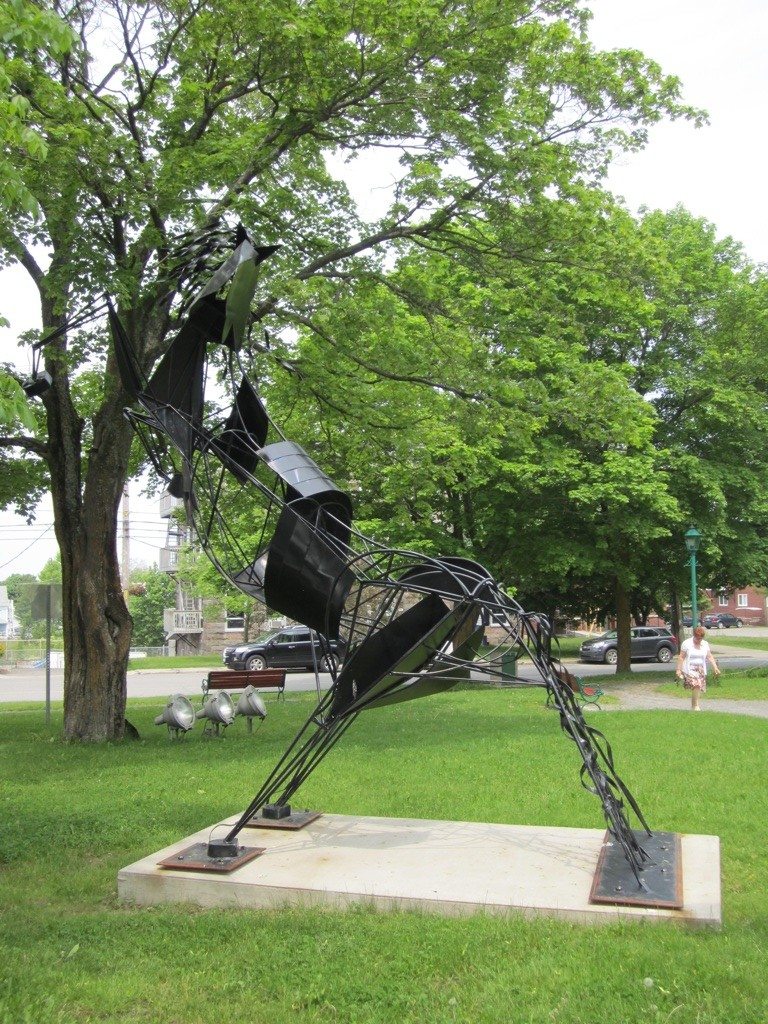 We came across this interesting horse sculpture.  It’s difficult to see in the picture but it was well over 9 feet tall.  It stood outside the church in town. 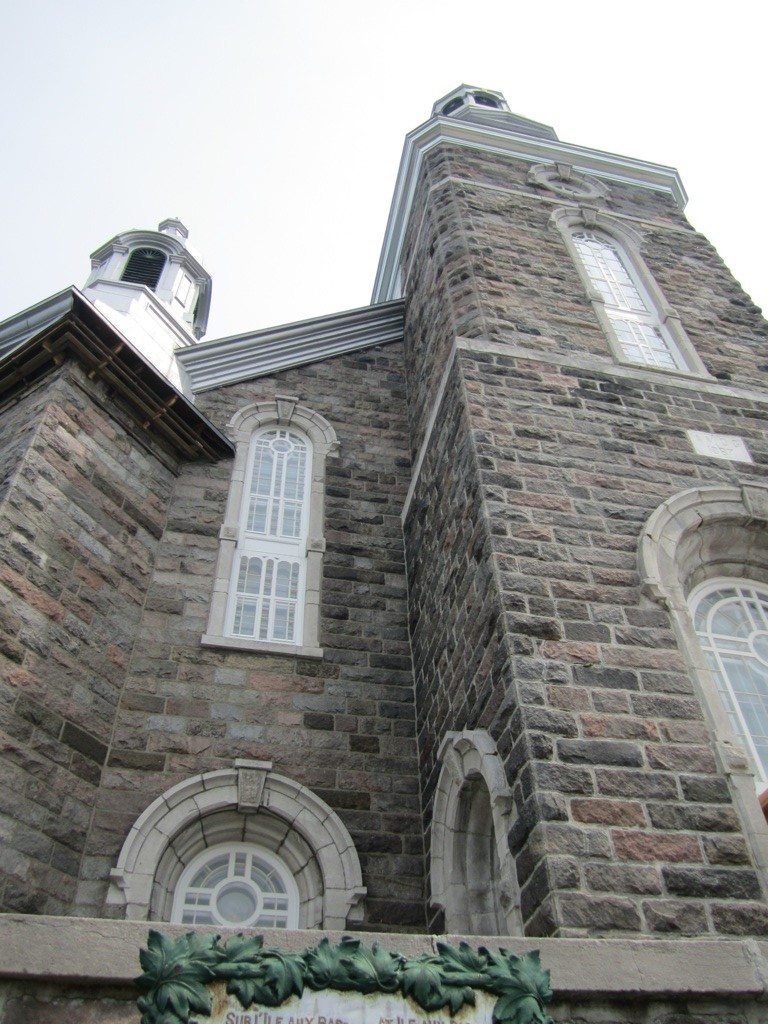 The Church In Town 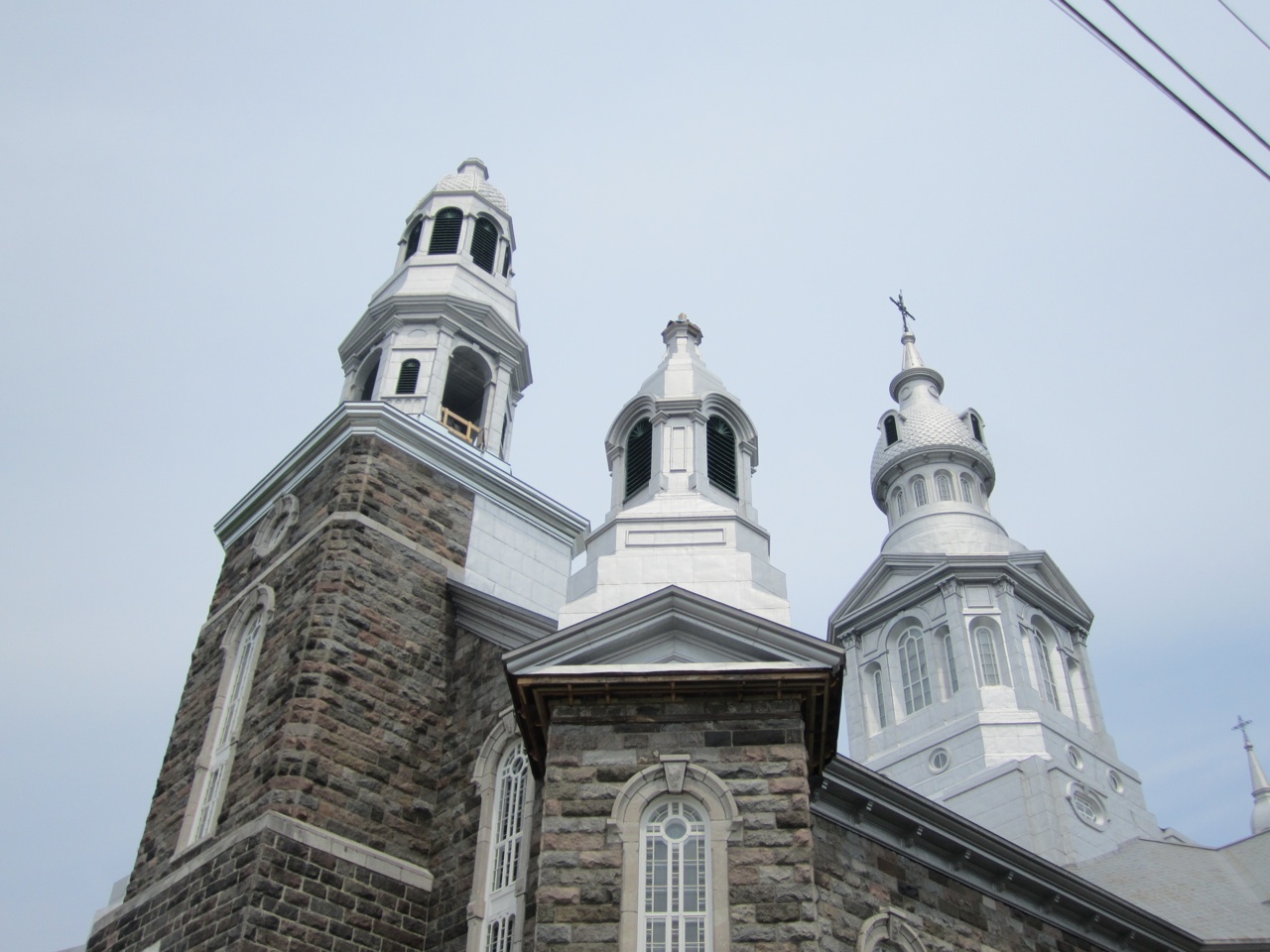 The Church In Town

The church in town was beautiful.  It had three large steeples.  I can’t really tell you much more about it.  The tour guide was at lunch and everything online and in their brochure is in French.  If you read French, here’s your link so you can learn about the church.  We just ended up taking a peek inside. 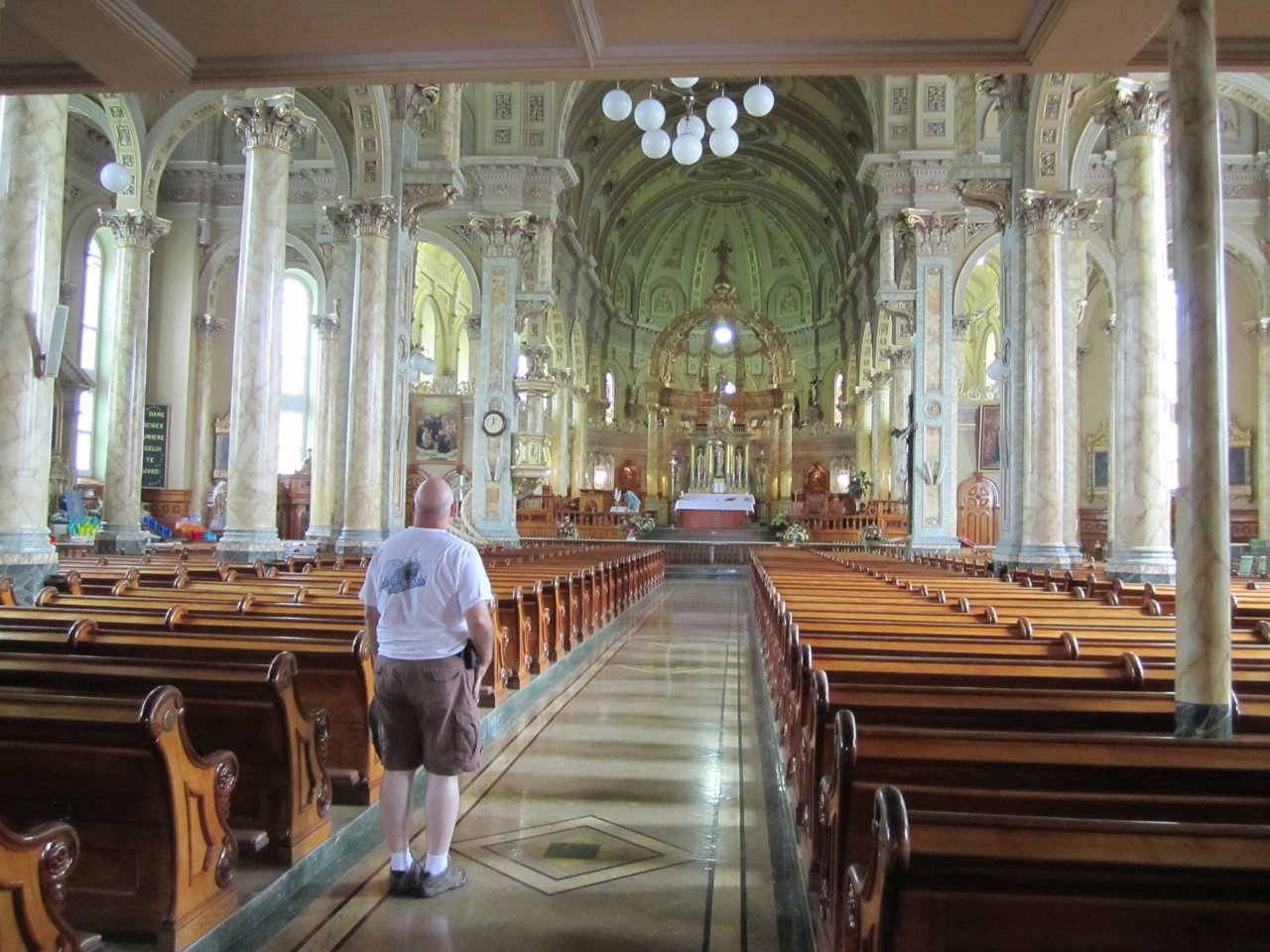 David Inside The Church 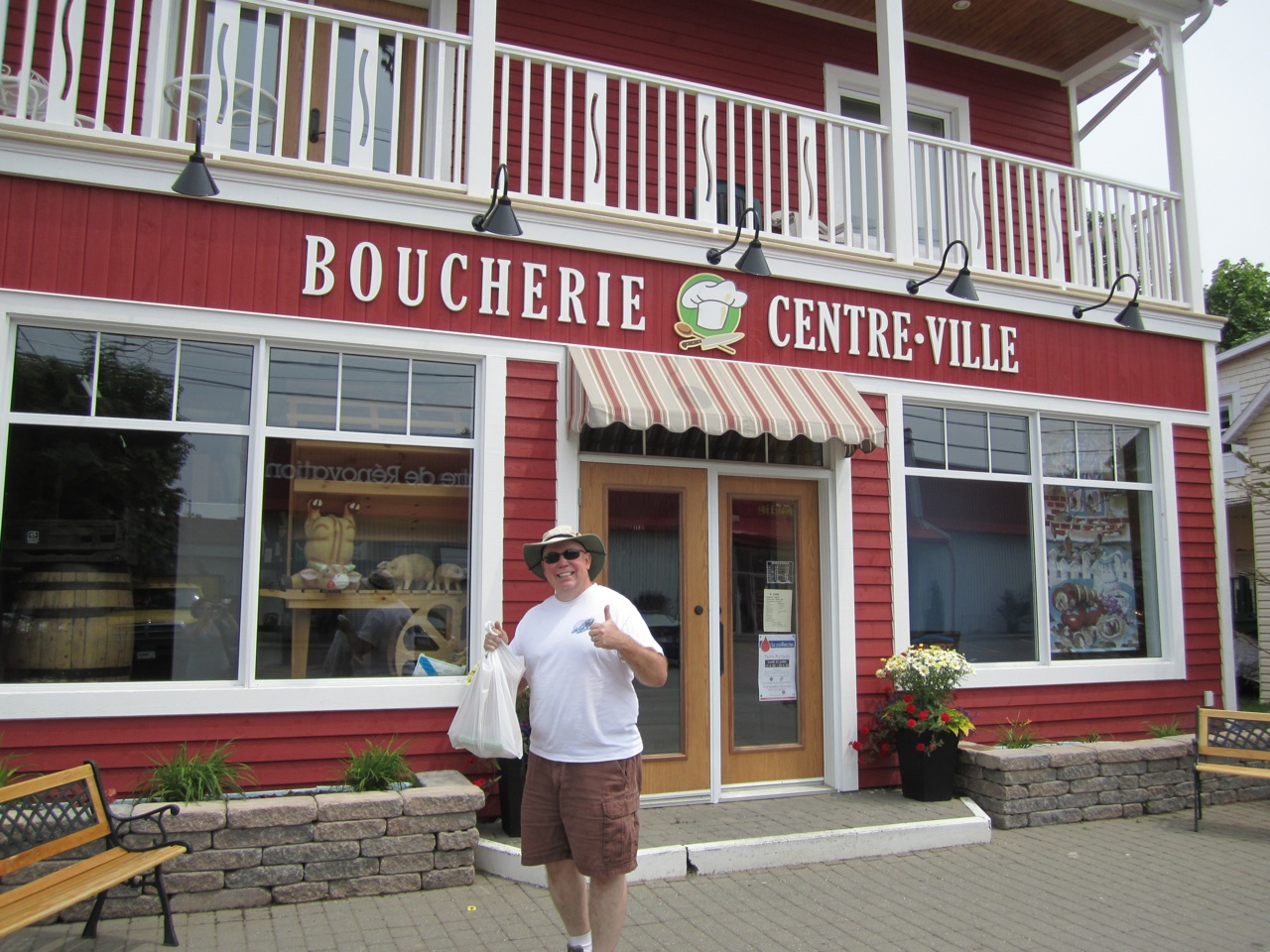 David Outside A French Butcher Shop In Town

We found a butcher shop and bought some spicy sausage.  We were lucky that the butcher spoke a few words in English.  So he was able to point out the spicy sausage versus the mild.

We also found a small plaza of shops and we bought a toaster oven.  I know, not terribly exciting but some of the people that we are traveling with have one and they use it for everything.  We thought about it and we decided we could save a lot of heat build up and energy by using the toaster oven instead of our convection oven.  So we bought one and I must say…we’ve been using it more and more.  I haven’t even turned on our convection oven since.  Nice.

All in all, a nice stop.  Relaxing after our big city adventure.  A nice change of pace. 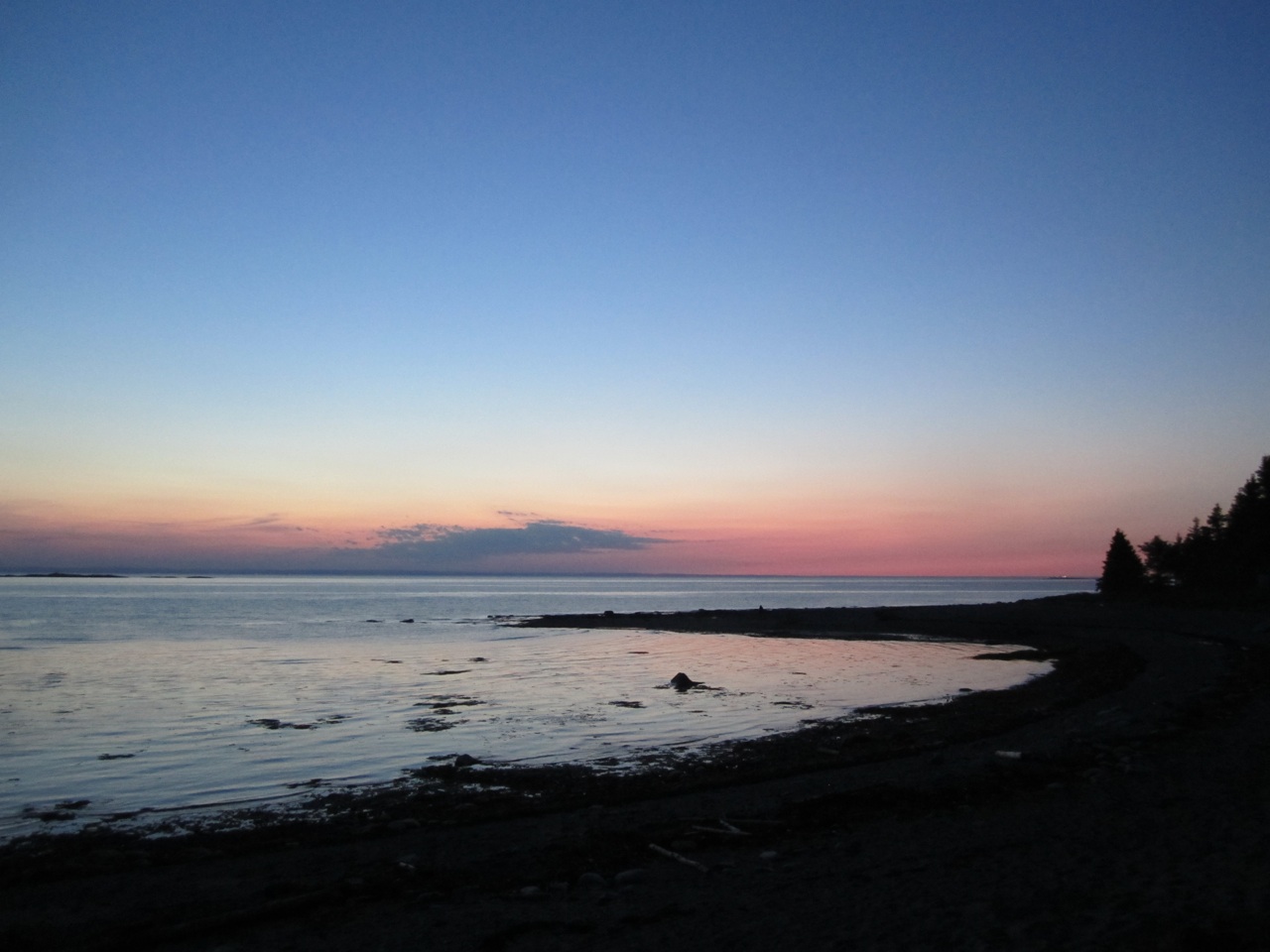 Sunset At The Beach At The Campground

Dad! Whatcha doing dad! Can I help? Dad here: I

Gotta work today. Dad had to take the car in for a