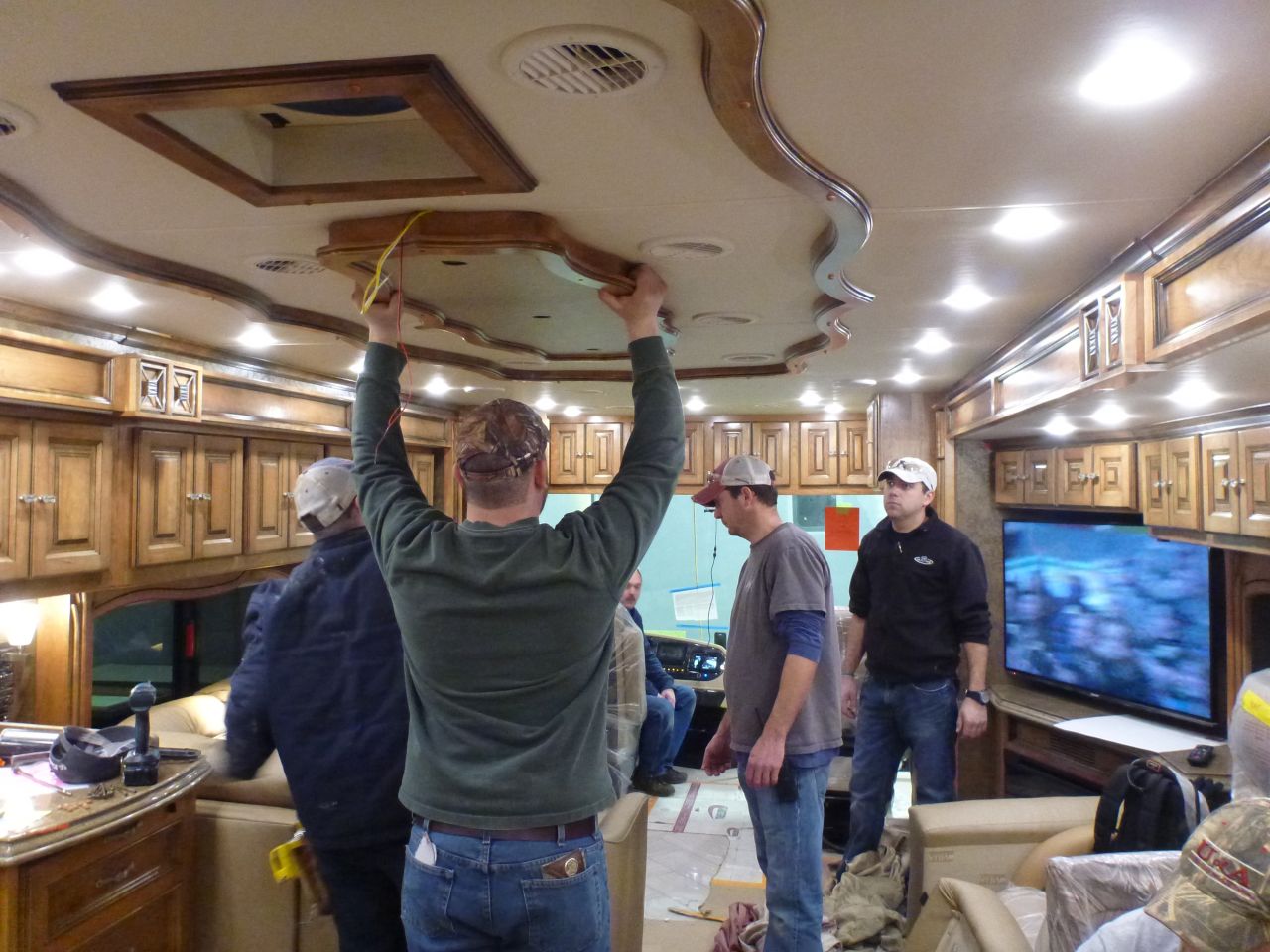 As you know, we are back at Red Bay. We were pulled inside in the finishing area and the team got right to work.

Since we didn’t have our slide placed until station 18 there was a lot of catch up work that had to be done. 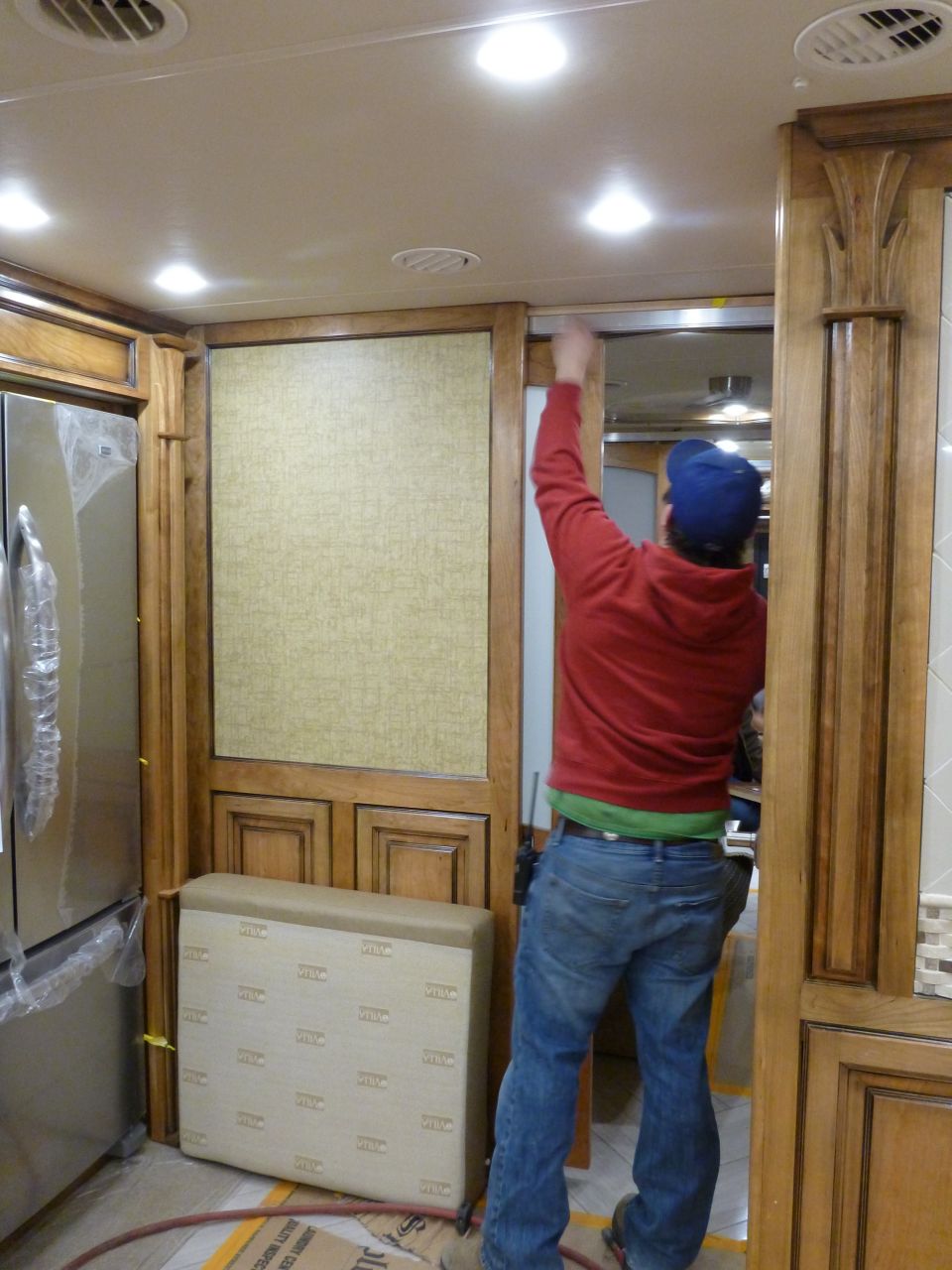 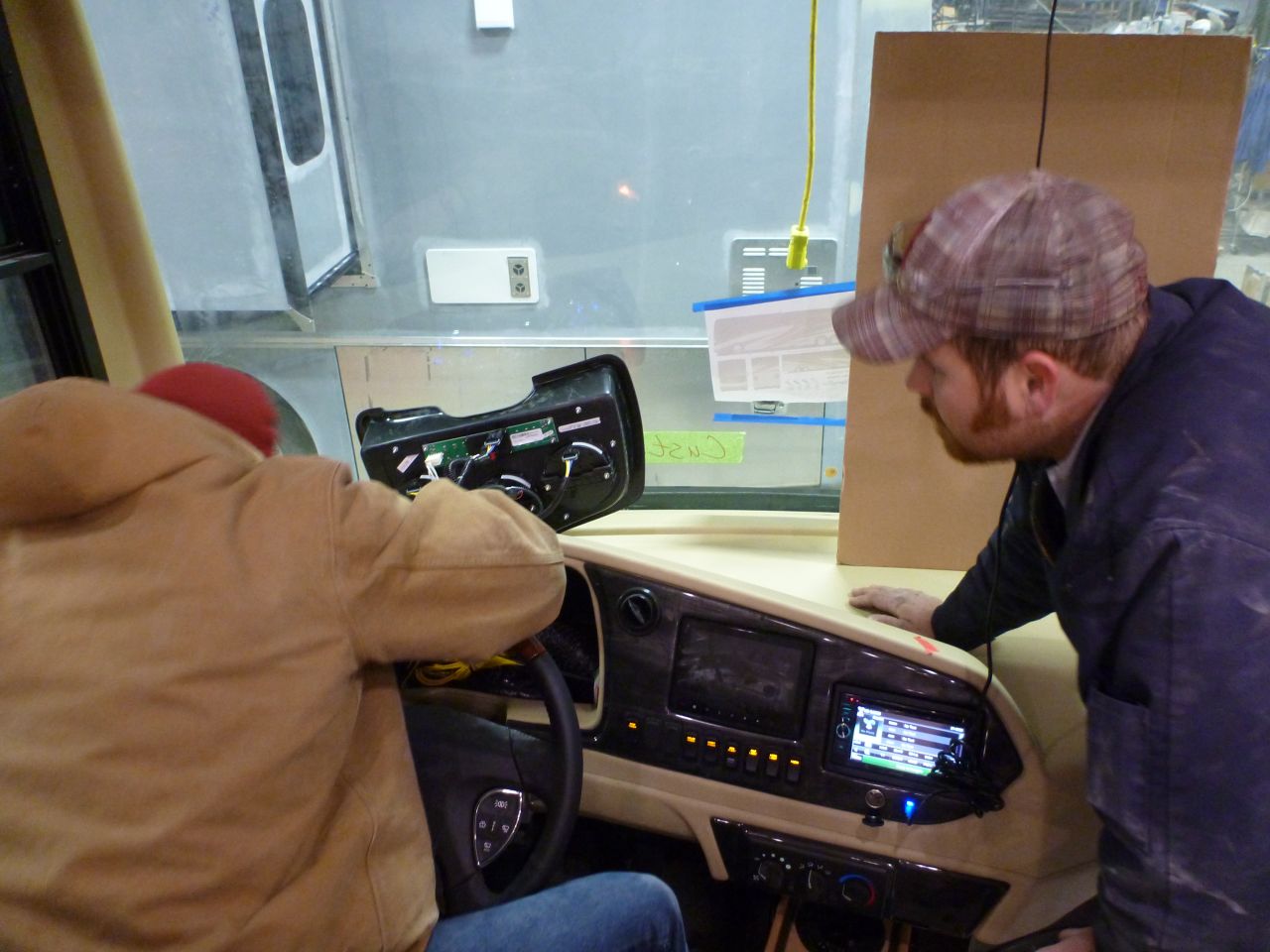 All three of our sliding doors had to be hung.

Our left camera was not working so the guys took the dash apart and found a loose wire. 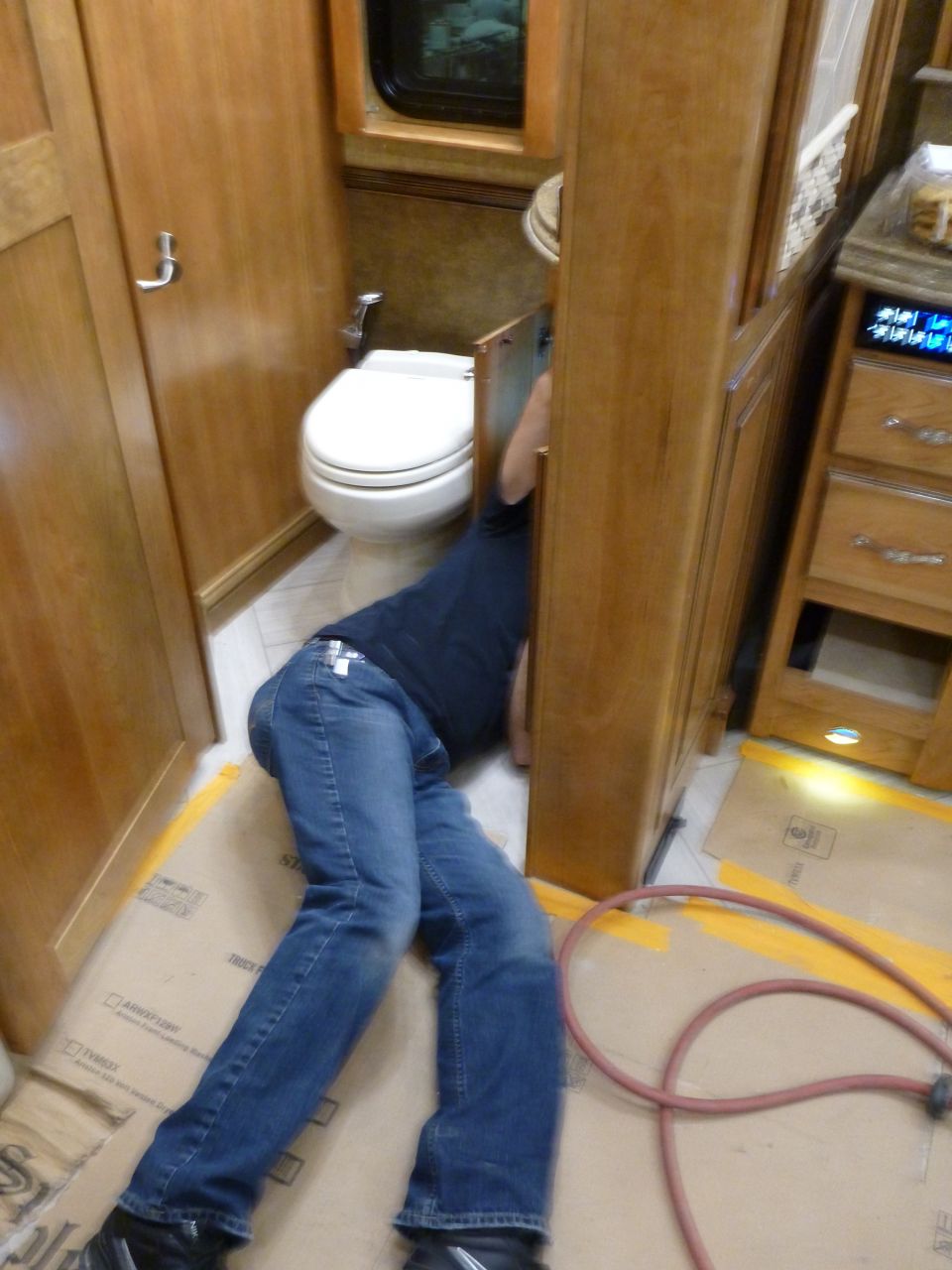 Something Being Fixed In The Powder Room 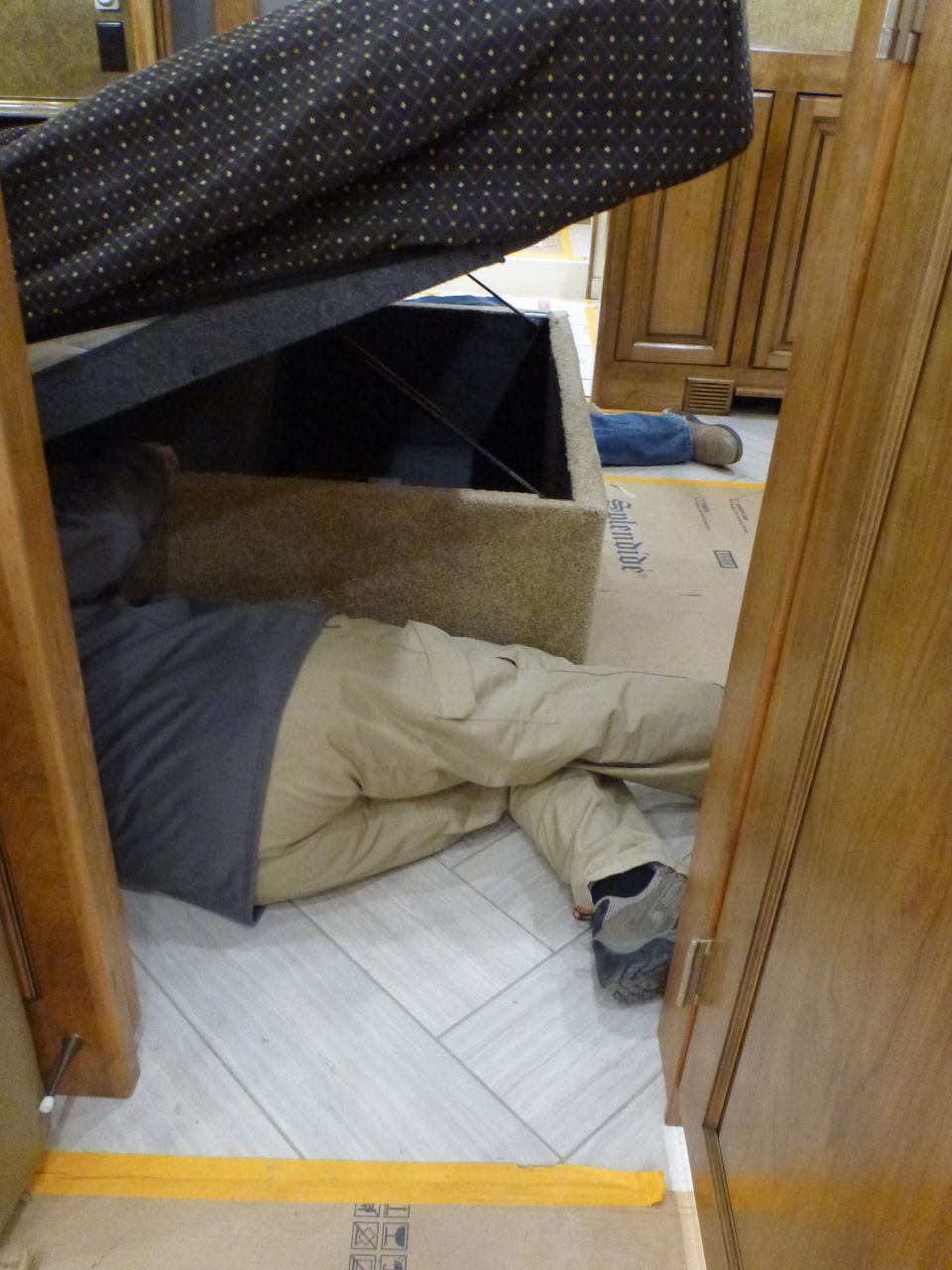 This seemed to be the day that people ended up on the floor. Something needed hooking up in the powder room under the sink.

As you may or may not know, under the powder room sink is where a lot of plumbing and wiring access is. So if you look under the sink vanity, you can get to a bunch of things under there.

David had a question about some wiring under the bed and where it went to, so the tech and David were talking about it. 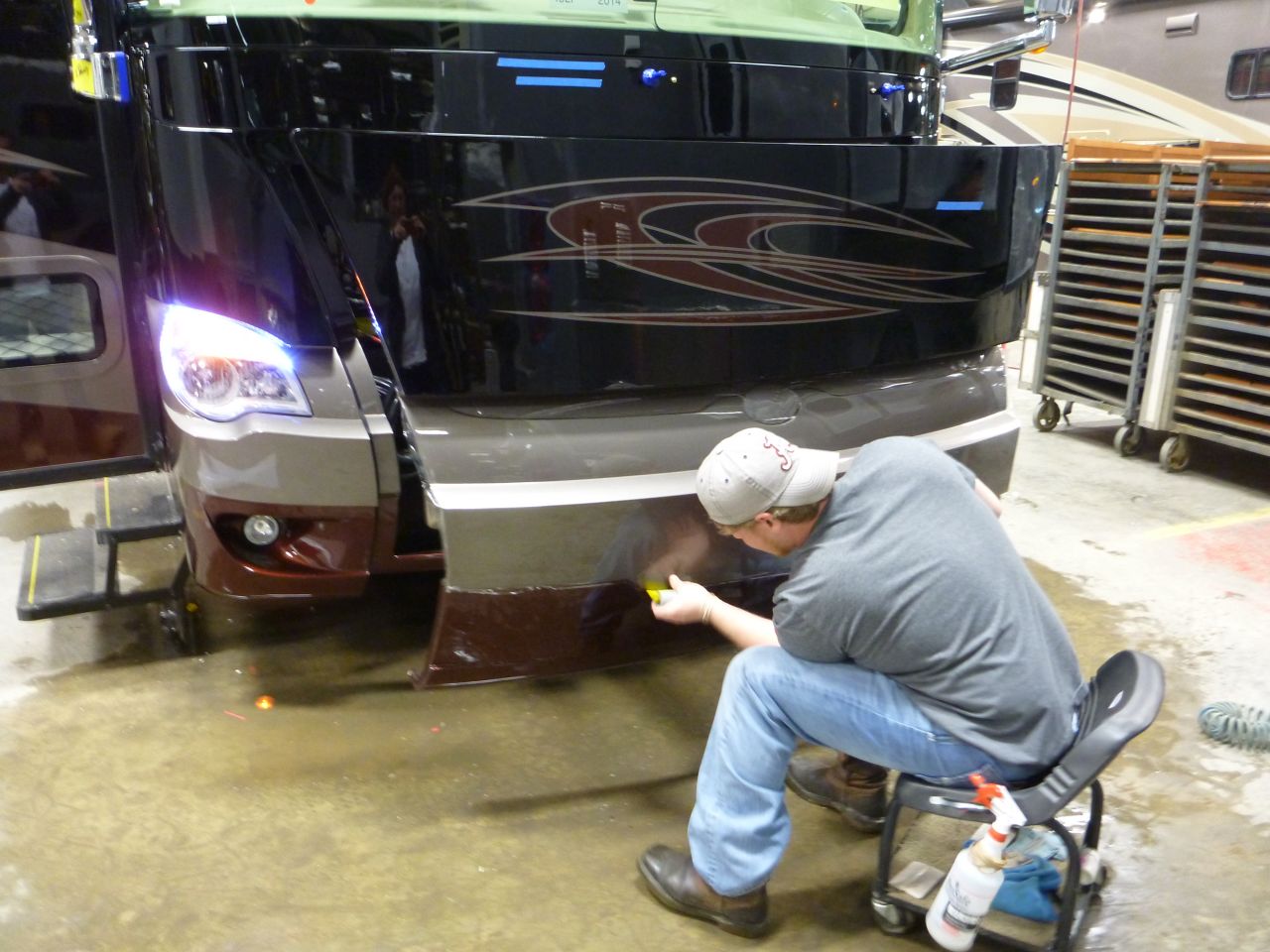 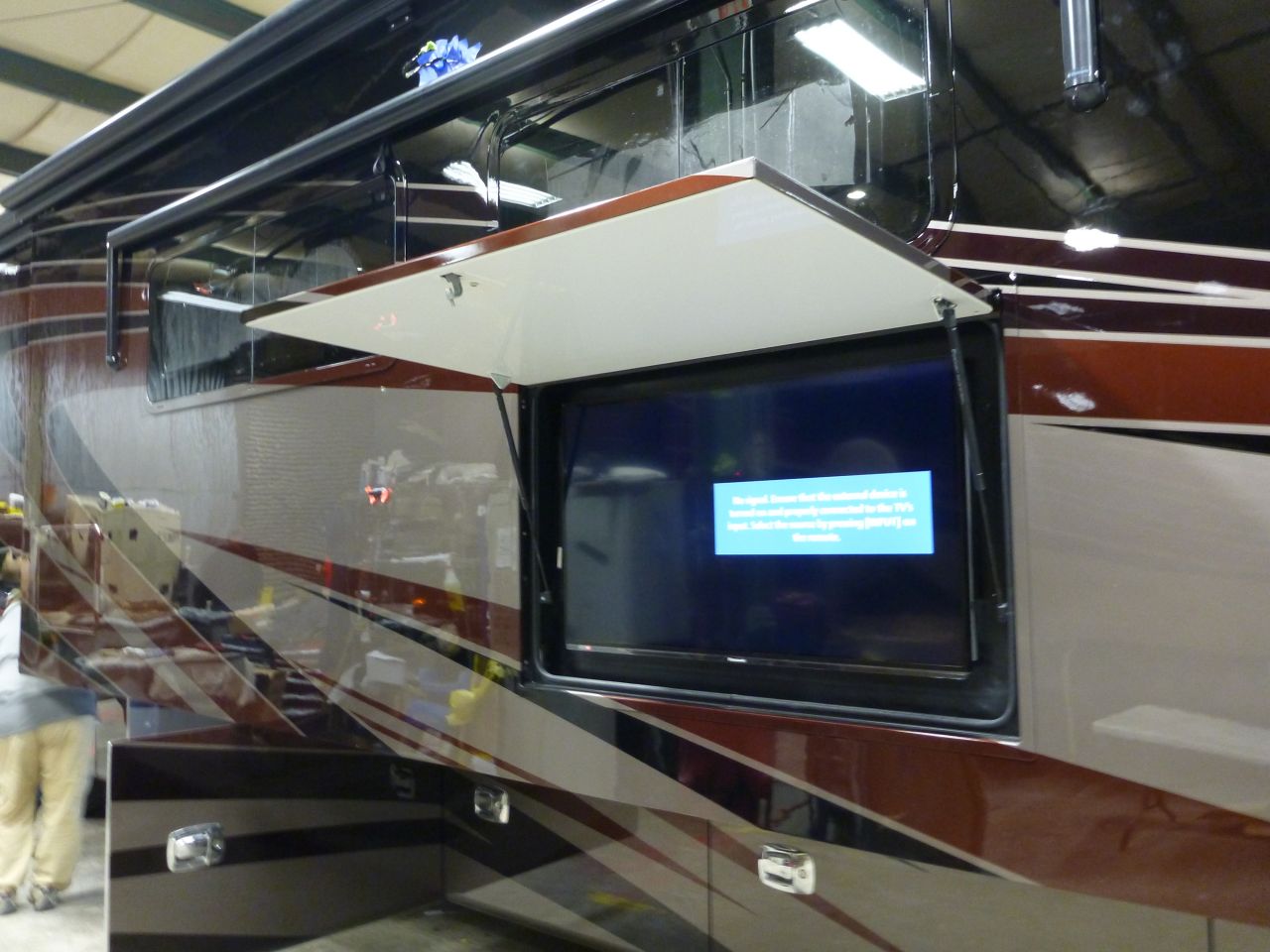 Outside TV Installed And Tested

Today was the day that the Diamond Shield was installed on the front. If you don’t already have Diamond Shield on your coach, we believe it’s well worth it. We have it on our current coach and it has really saved our front end from road debris and chipping. 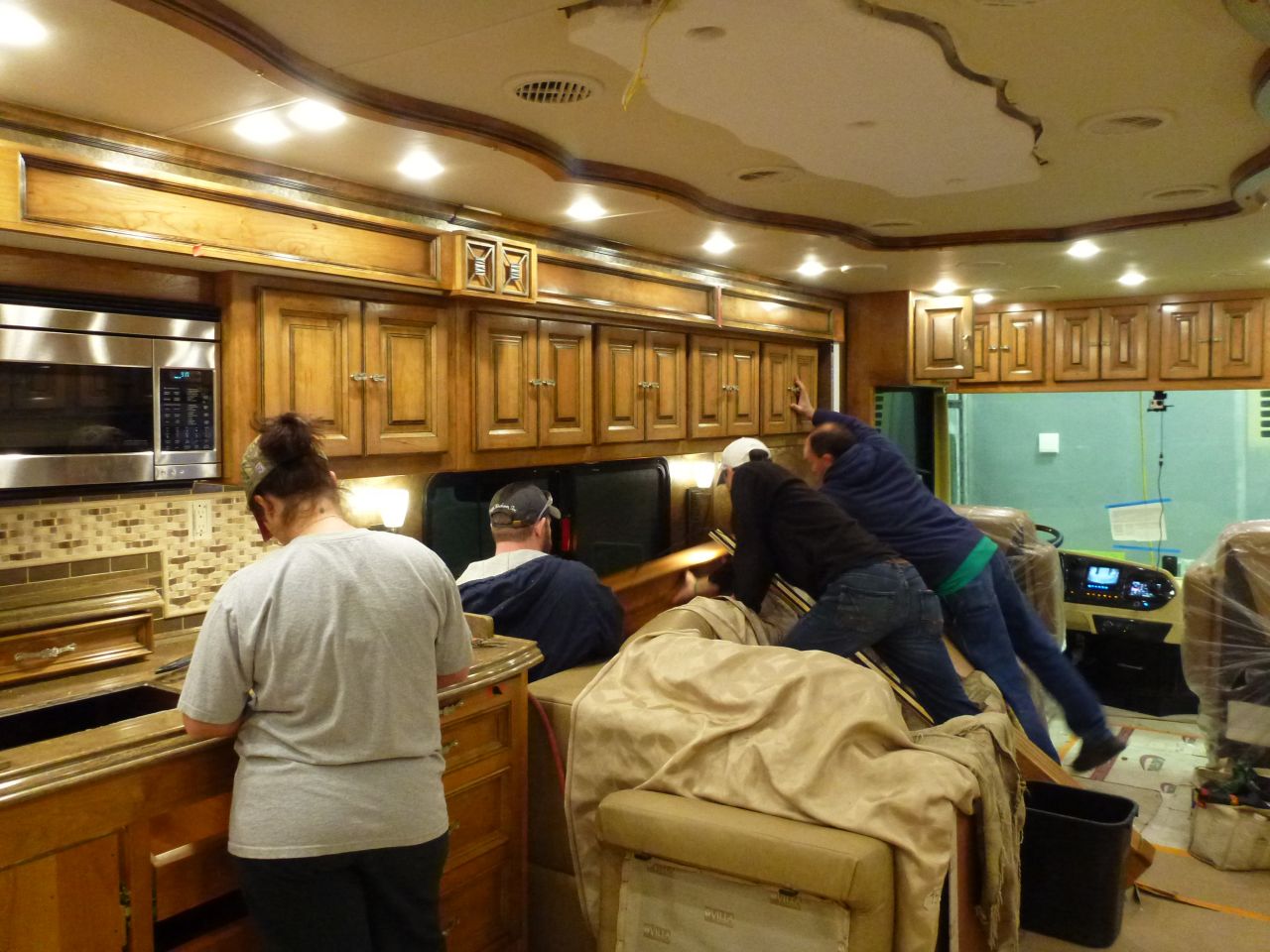 Another Valance Getting Installed 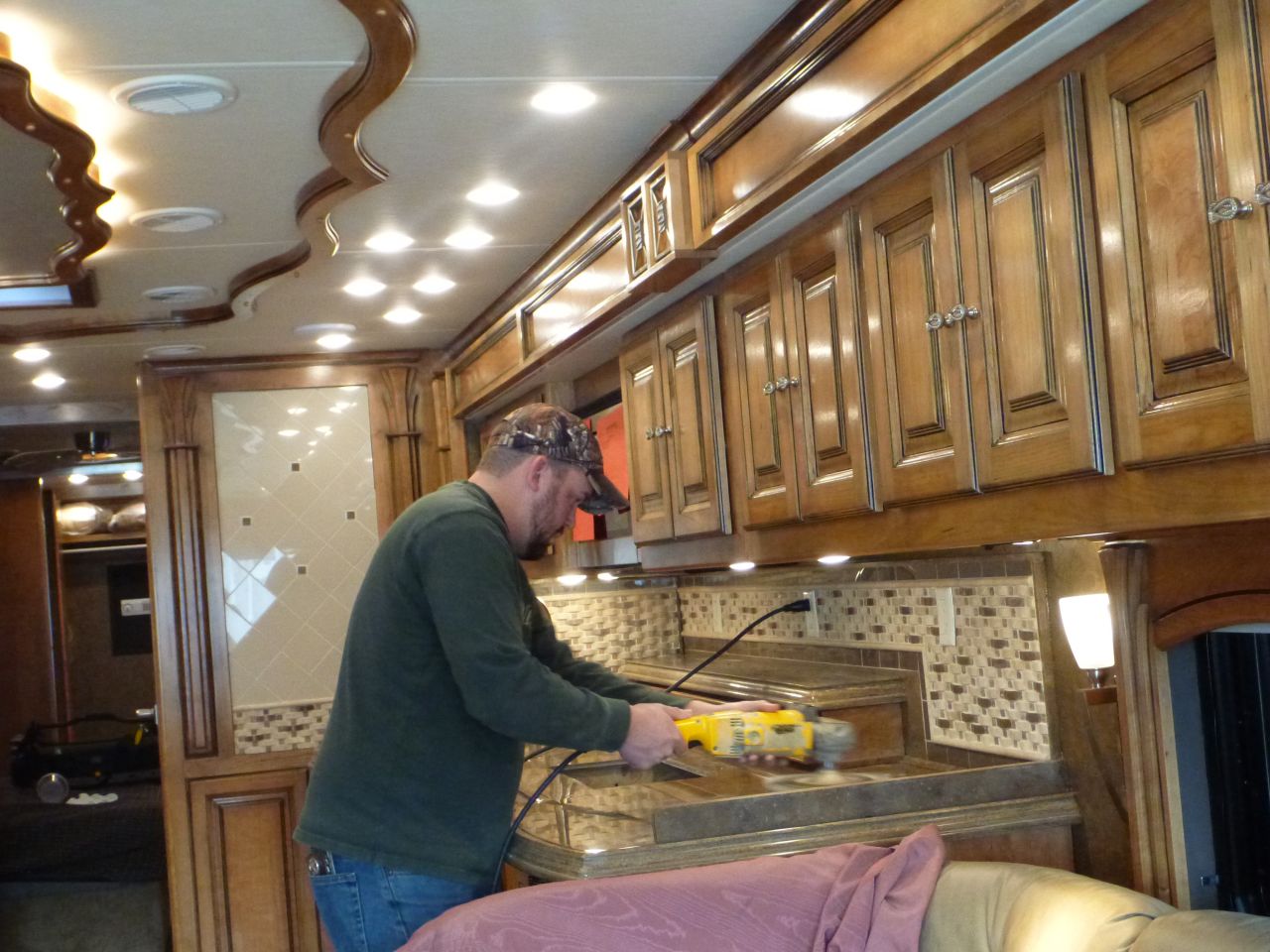 We needed our valance behind the couch trimmed down a little bit so the couch could be pushed all the way back. It’s not an easy task of just trimming it a little bit though. They have to pull the entire couch out, after they bolted it to the floor by the way, then remove the valance, trim, replace valance, push couch back, bolt it back to floor and walla! Now the couch is back as far as it can get. Every little bit helps.

This is what I mean by the people of Tiffin wanting to make everything right and to our satisfaction. The couch and valance were already installed and we noticed the next day that the couch had a gap of about three quarters of an inch. The couch was back as far as the valance would allow but we did not like this gap. So we mentioned this and we came up with a solution. That was to trim off a small amount of the front face of the valance bottom so the couch could be pushed back all the way. The team was more than happy to do this even though it meant taking everything out. Well, then again, it was a prototype couch and those who knew that understood their more than likely would need to be some “fitting” done.

This is what we like about Tiffin. They all want customer satisfaction. If you are not, they will try to see what can be done to the best of their ability and within reason. But again, with the couch we kind of knew we would need some work here and seeing this also ‘could’ help Tiffin, it was needed to be done. So if one day your new couch has this couch, well, you now know what it took to see how it would work out.

All the counter tops got a good buffing to get out any little scratches that may have occurred during production.

The team also went around and wiped down and cleaned all the surfaces. This mind you, will need to be done several times throughout inspections. There is just no way to get around all this dirt, dust and grime from a factory. 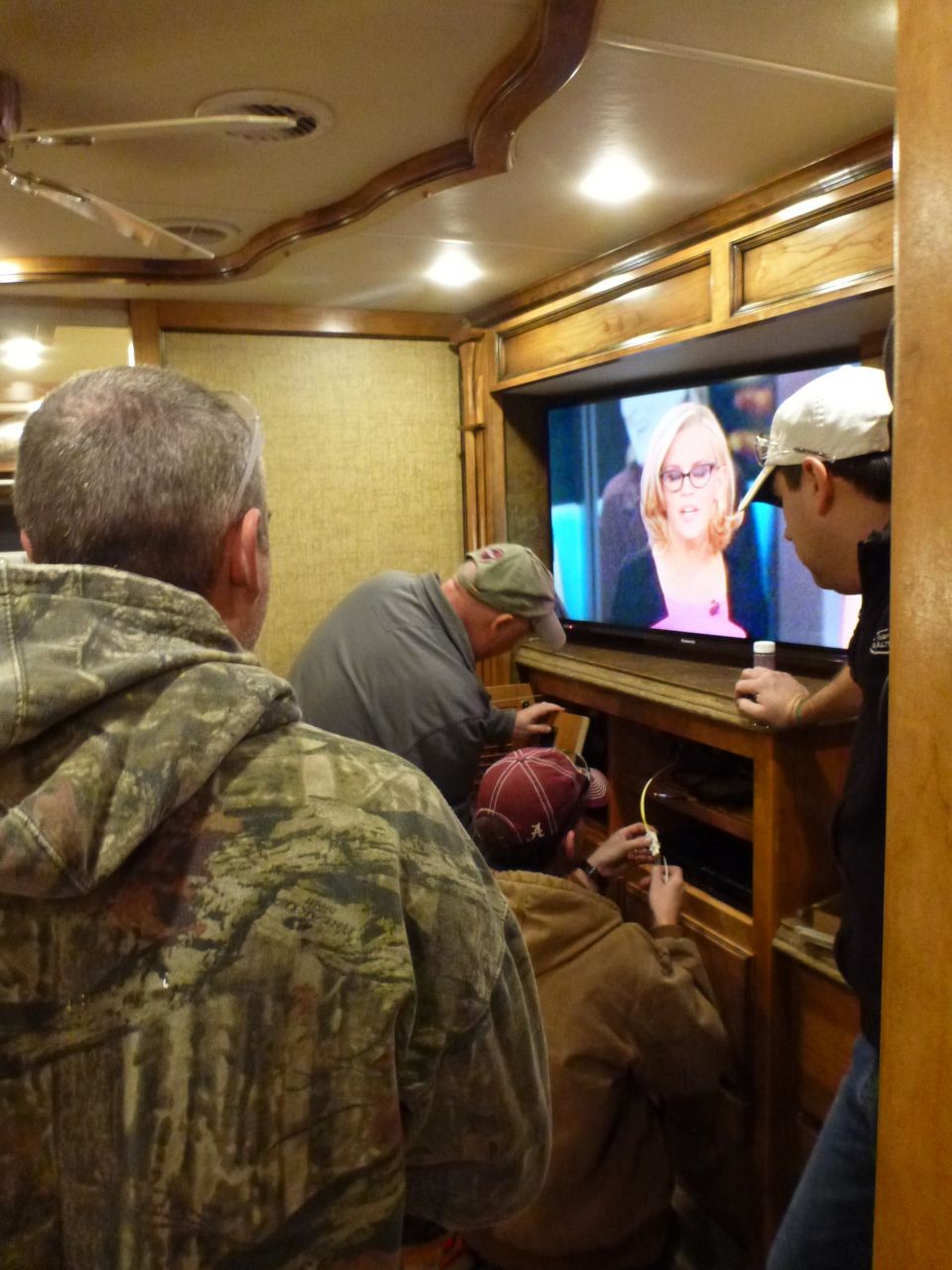 David Working With The Guys To Improve Something 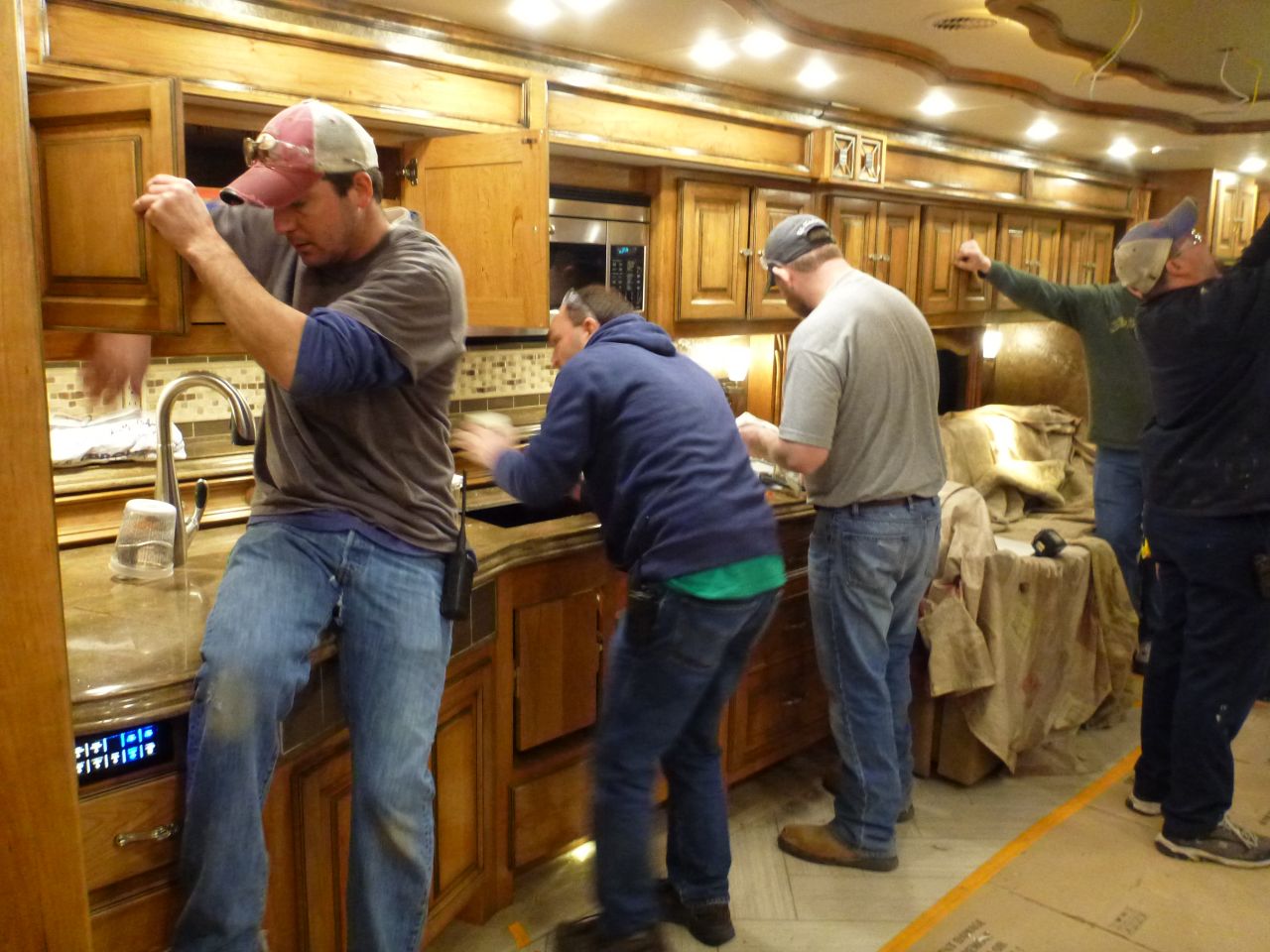 Installing A Shelf And Other Things

It is in David’s nature to try to improve on how things are done, so he was showing the guys about how the little fan in the electronics cabinet could be easily improved upon and how a simple fix would help with heat build up. It was documented for future coaches.

We needed our shelves installed in our kitchen cabinets, so they did that for us.

All this little stuff, which isn’t so little when you add it up, added up to a couple hours of work. It still amazes me at how many people can fit into the coach at one time.

After they were done with all this various stuff we found out that Bob Tiffin wanted a driver to take our coach for another test drive. We were told that Bob is very particular in how the Buses drive. 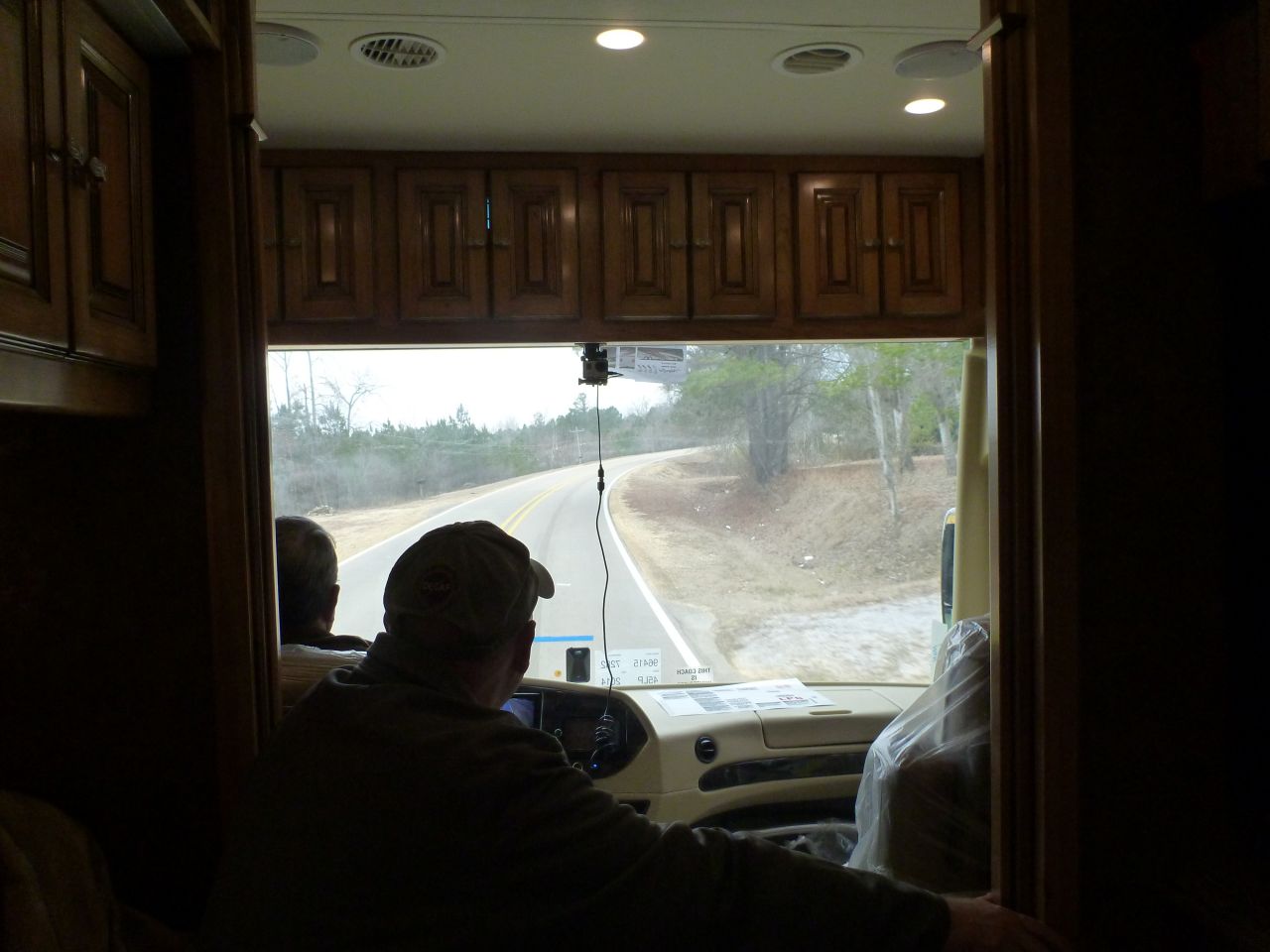 Taking It For A Test Drive

So a driver took us for a test drive and boy, I must say, it still drives real nice. We can’t wait to get behind the wheel. However the driver noticed that it was pulling a little to the left. So in for another alignment it went. 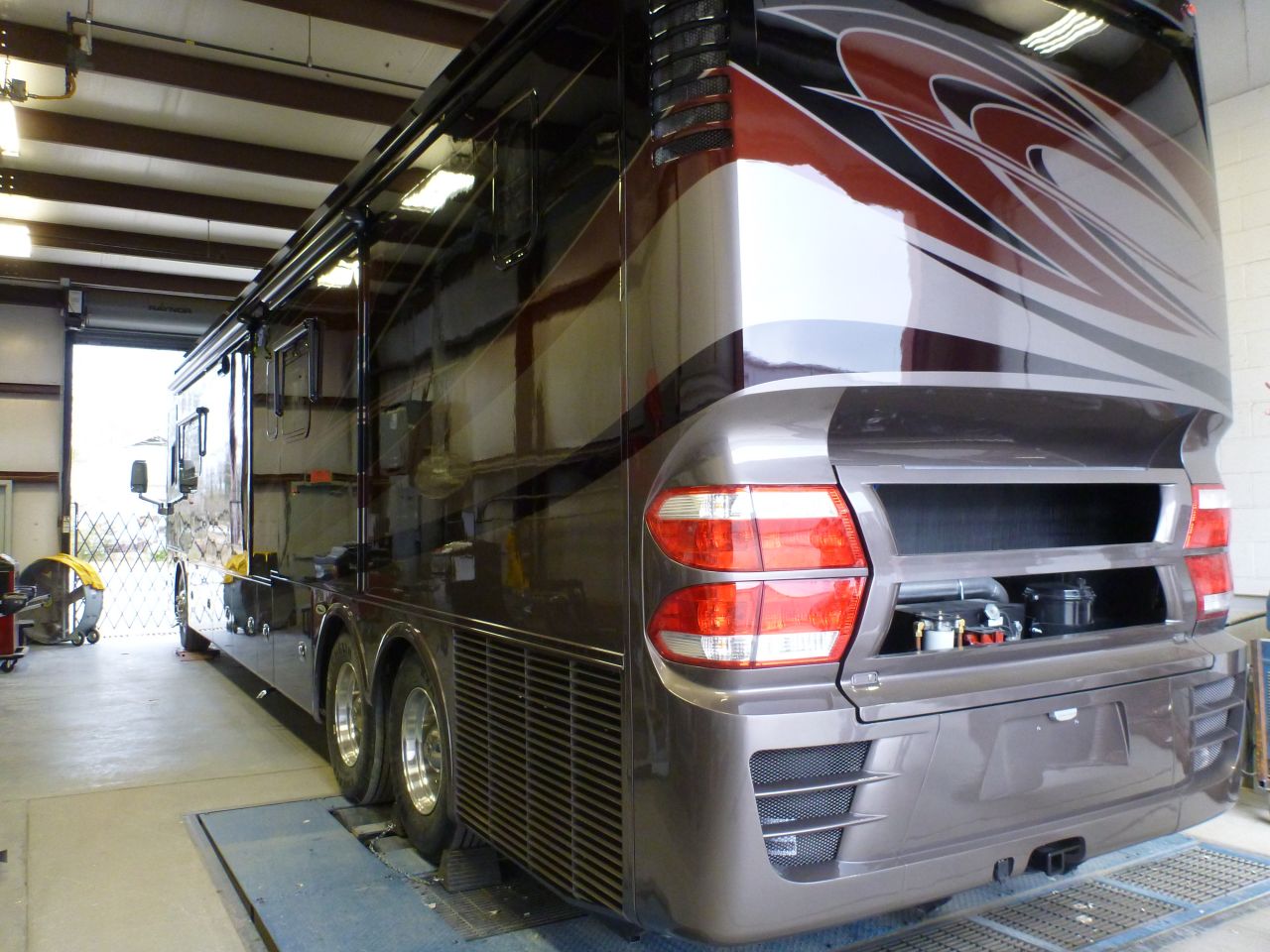 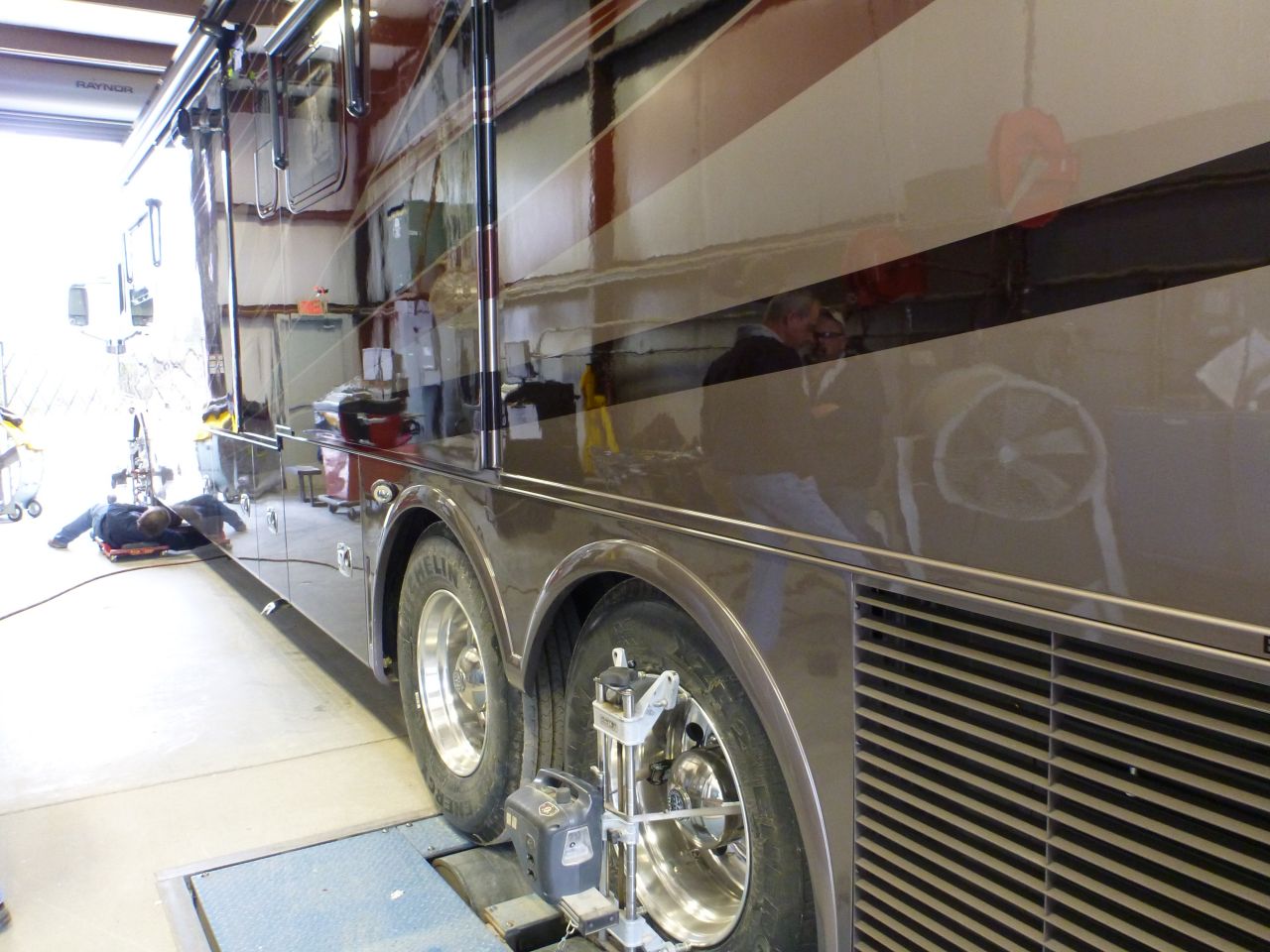 Back to the mechanics shop we go. After the mechanic hooked up his computer it did indeed show that it had to be adjusted just a little bit. We asked how this was possible since we just had an alignment a few days ago. He said it could have to do with the ride height and that could have changed. So he got it all dialed in straight.

I have a feeling we’ll be going for another test drive next week as they seem to be really into the performance and handling of the the Allegro Bus.

We’ve now reached the end of the day. The decision was to leave the coach in the garage for the weekend.

So today was just a bunch of make up work here and there. Installs of things that didn’t get installed before our coach went to paint. More inspections. Sorry it wasn’t a terribly exciting day.

I think Monday is going to bring a lot of the same. 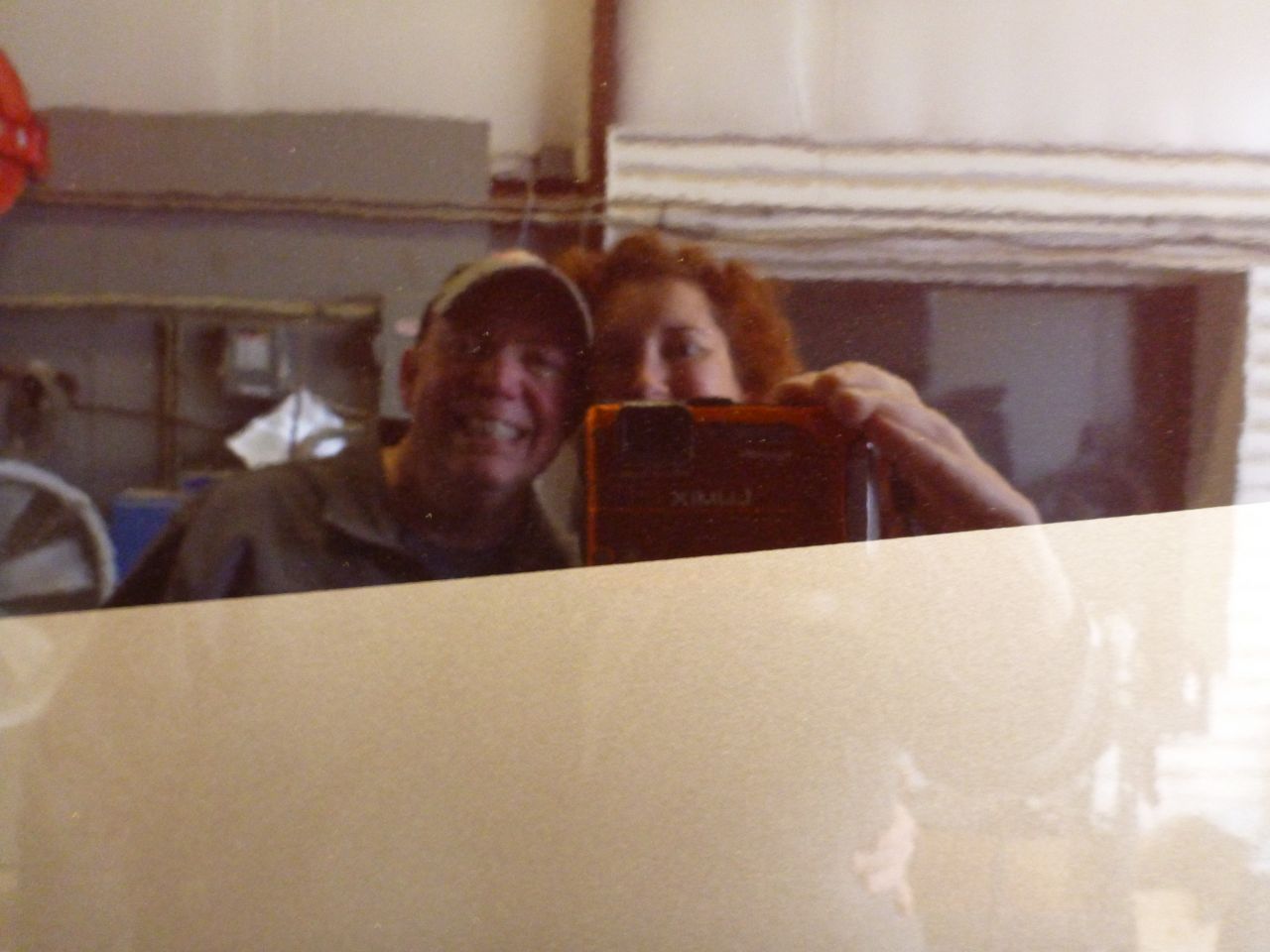 So for now we’ll just have to say good-bye for now and see you Monday.

But we have the time lapse video of todays work…

And a small set of photos. Please click Show PicLens for best viewing…

Mom gave me an early Christmas present. She got me

Sometimes I just like to bring my hedgehog outside

Gotta help out any way I can. #helpingdad #supervi

I lub you mommy. Can I have what you're eating? Do