Freighters And The Great Lakes Passage 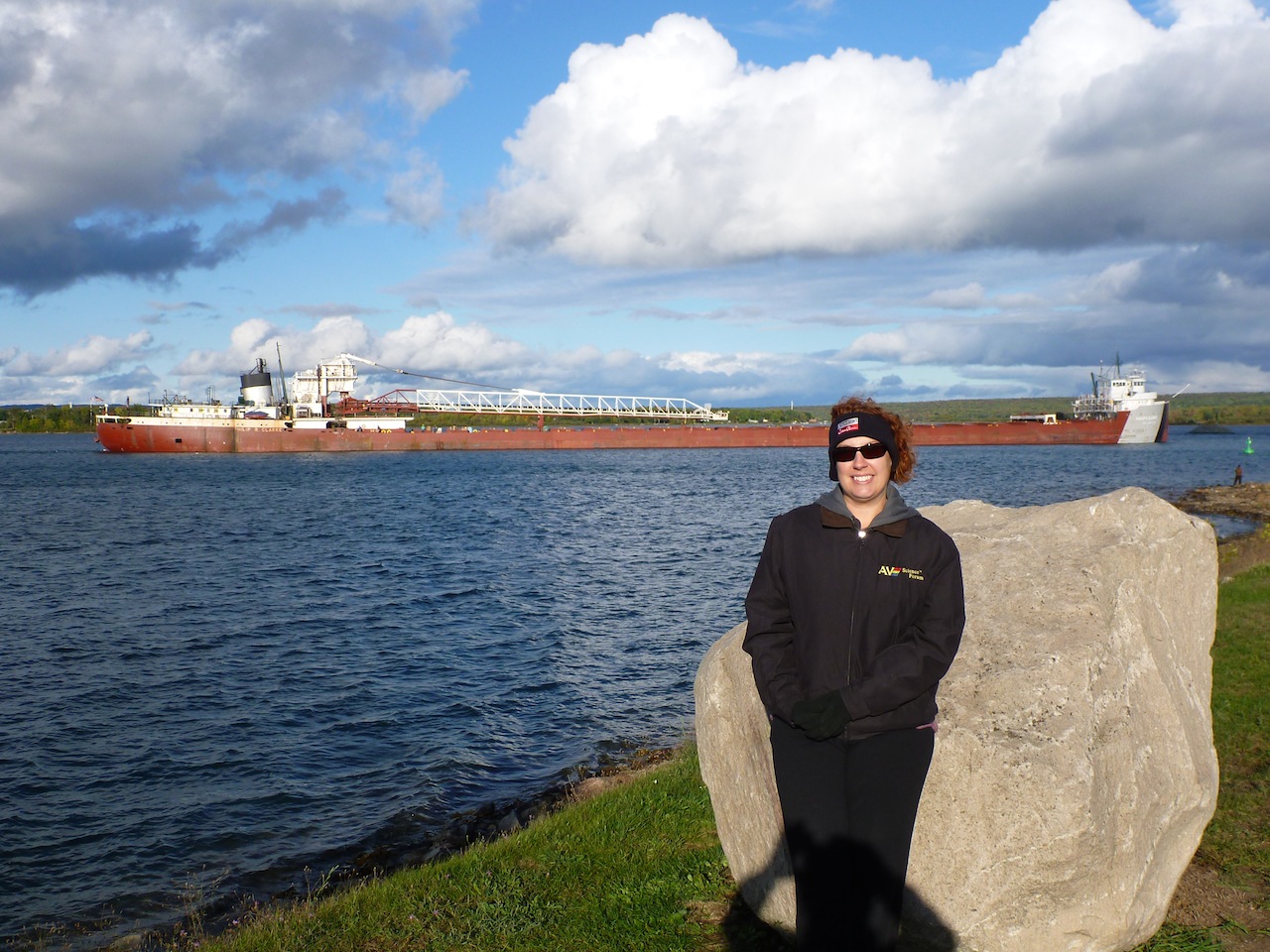 Brenda And A Freighter Passing By

Once we left Mackinaw City, MI we drove an hour or so north of there to Sault Ste Marie, MI.  Located in “The UP”, or the upper part of Michigan for those of you who do not know the Michigan lingo.

Sault Ste Marie is as far north as you can go in Michigan without crossing into Canada. Looking at the picture above, the land that you see on the other side of the river is Canada. Standing in our motorhome at night, I could look outside our window and see a streetlight change from green to red, in Canada. That’s how close we were. Not that being that close to Canada is that interesting, it’s not like I’m seeing Russia from my house or anything, but I thought it was pretty cool that I could see a street with the cars and the street light change, in a different country while sitting in my motorhome in another country. 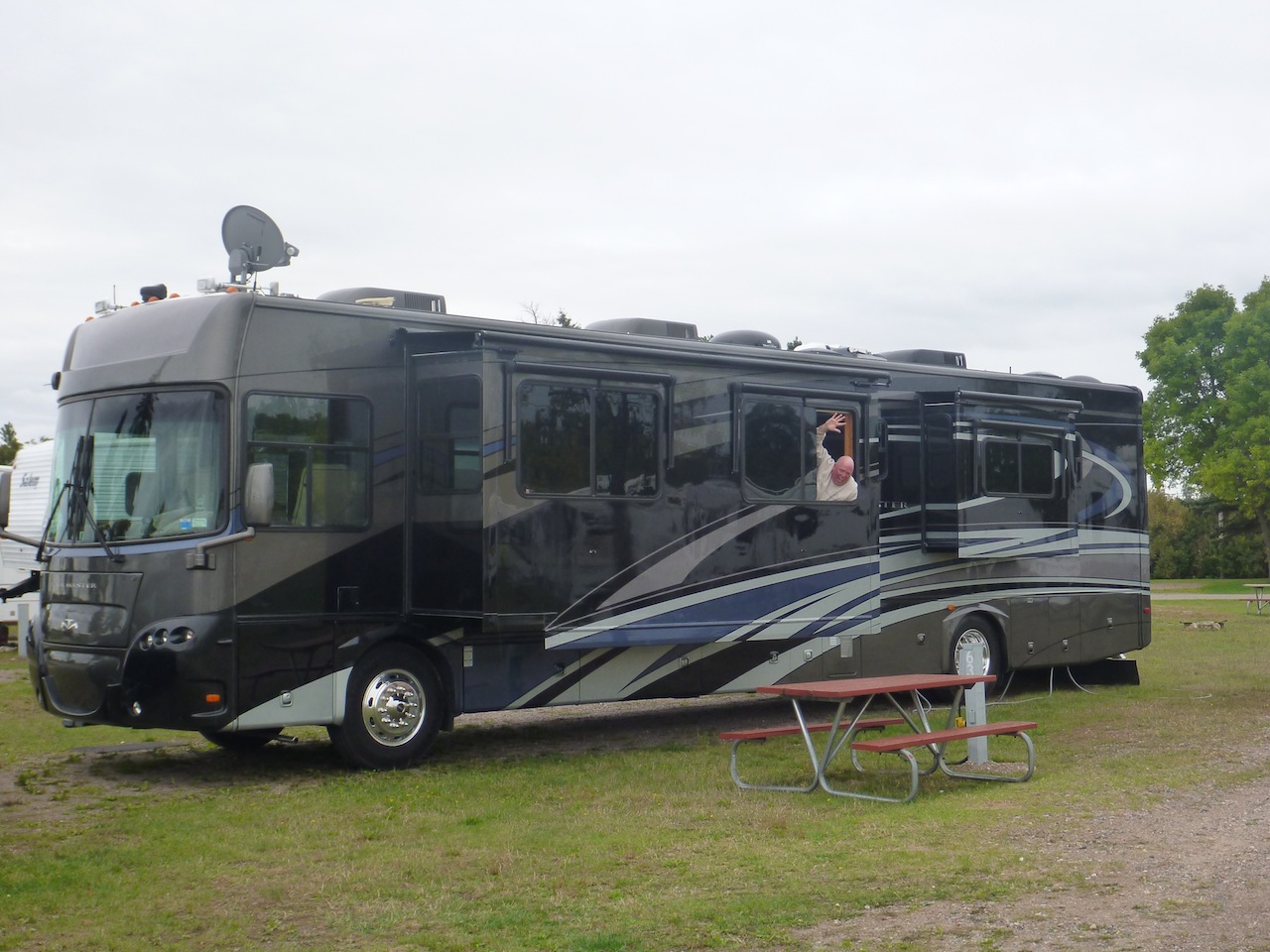 Our Site At Aune-Osborn Campground 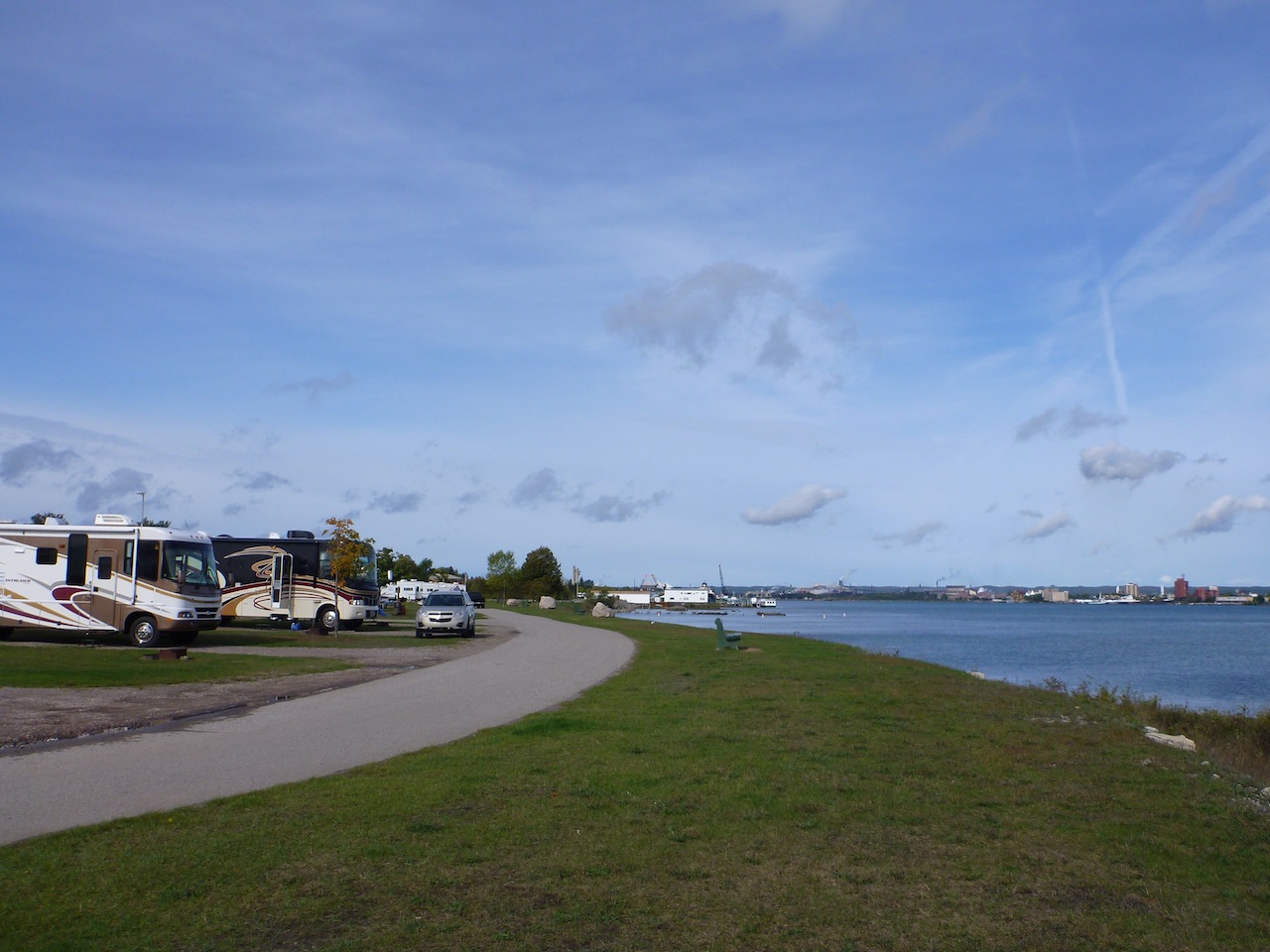 Some Of The Water Sites At The Aune-Osborn Campground

We were actually on site 63, which was a couple streets away from the water, but we had some beautiful views.  We could easily see the ships and the waterway. 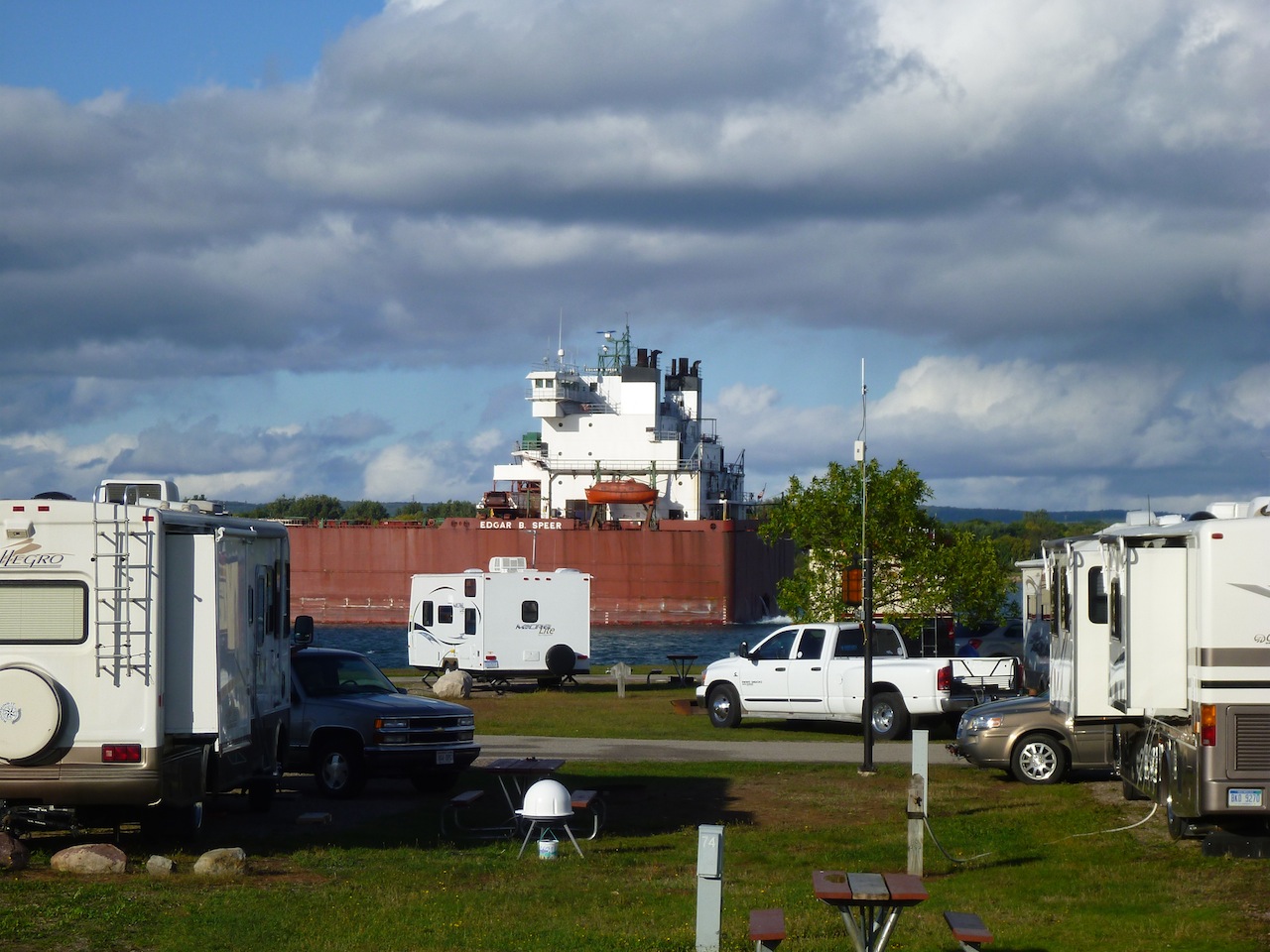 Our View From Our Front Windshield. The Ships Make The RV’s Look So Small.

At the campground, everyone was super nice.  Their are a lot of Michigan residents that come up here for vacation.  Lots of fishing that goes on.  The campground is located right next to a town park that has a boat launch. 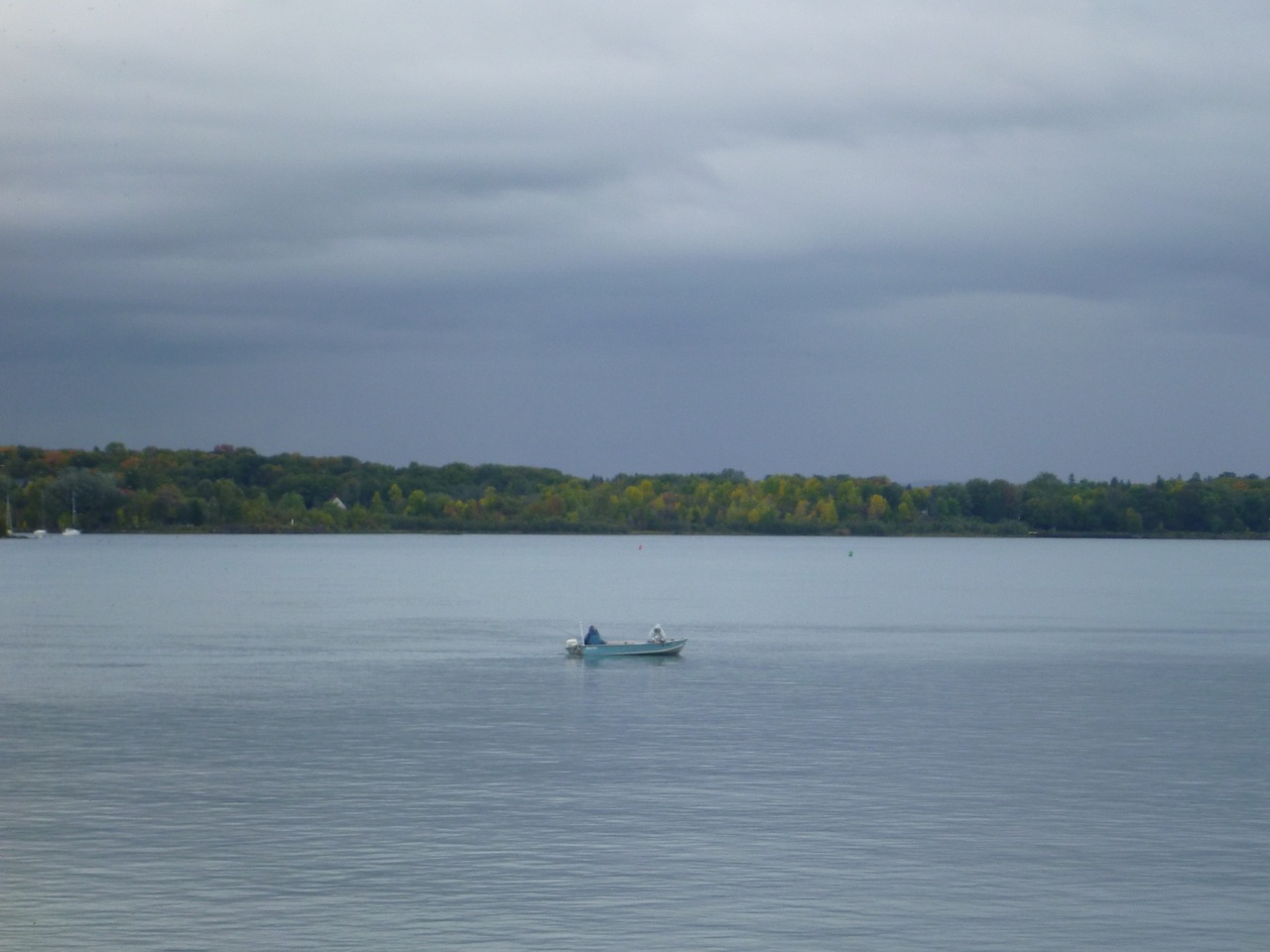 A Fisherman On The Waterway Off Sault Ste Marie, MI

While there we had wonderfully fast internet and great water pressure.  Which in our opinions are high on the list.  The weather on the other hand was not that great.  We had rain on and off, but mostly on.  Dreary, windy and drizzly days.  Cold nights that held possible frost warnings, and this was only September!  The residents did mention it was early for that type of weather though. 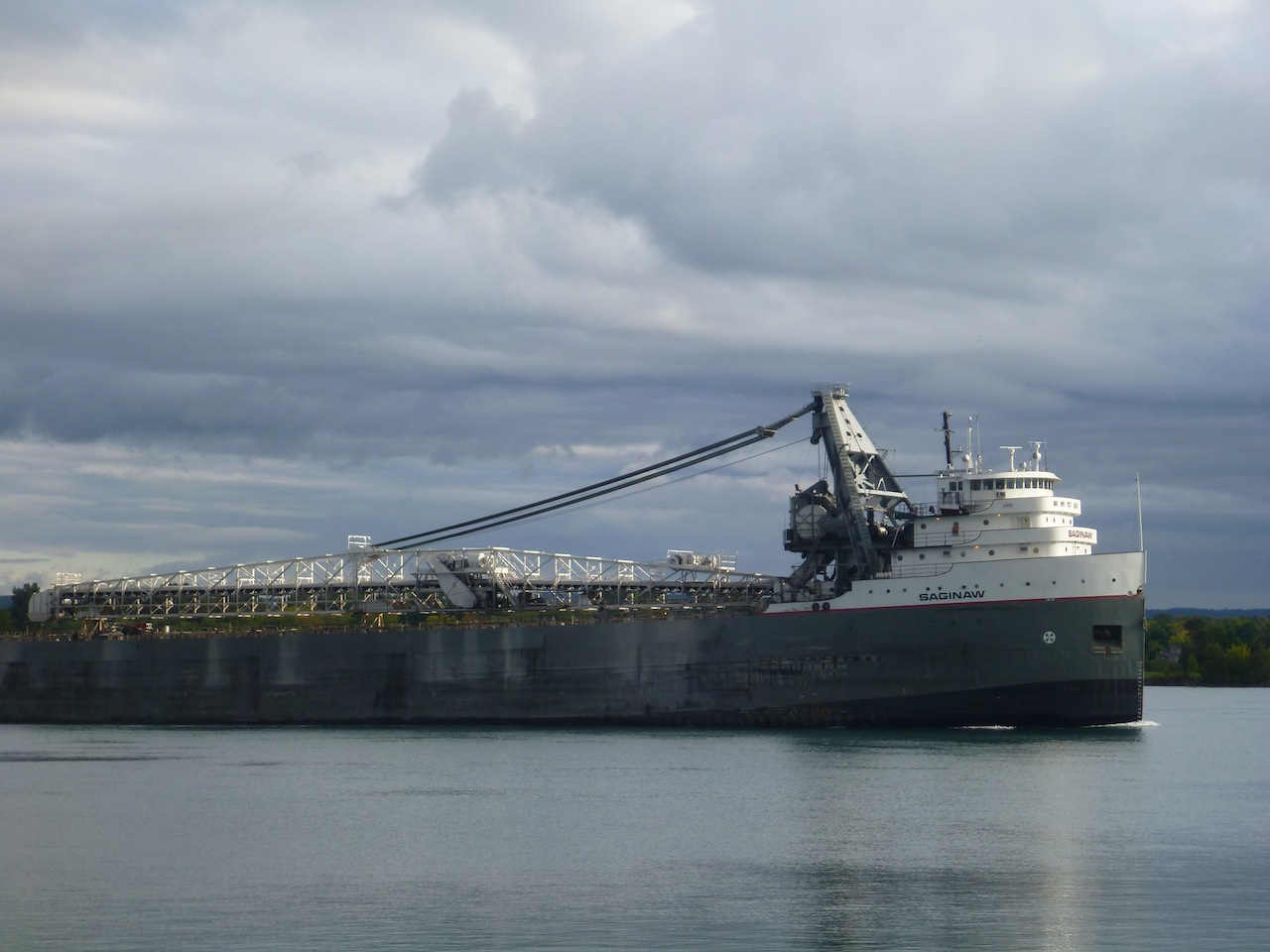 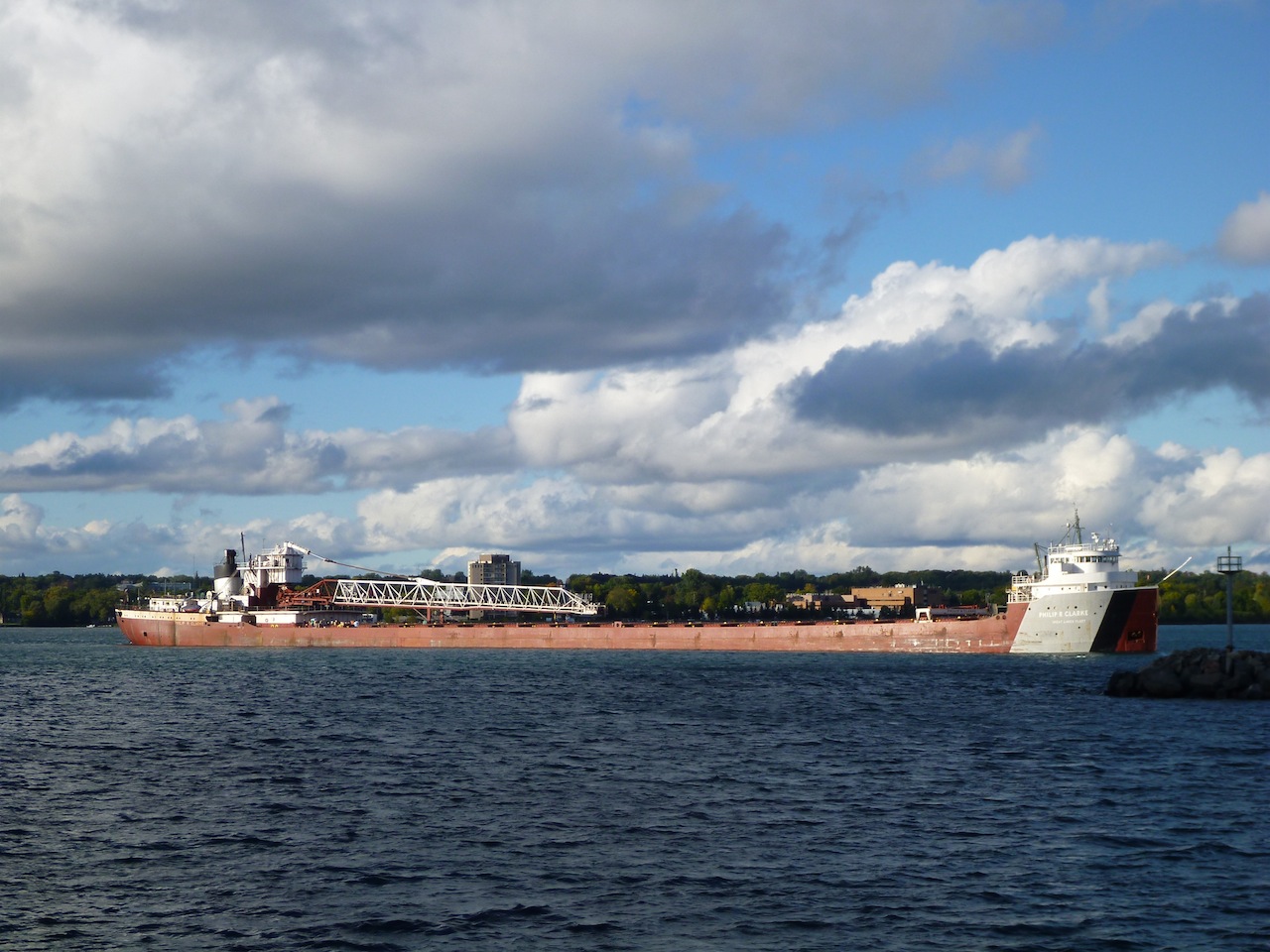 When we did have some breaks in the weather we took advantage and got the quadcopter out and did some flying. 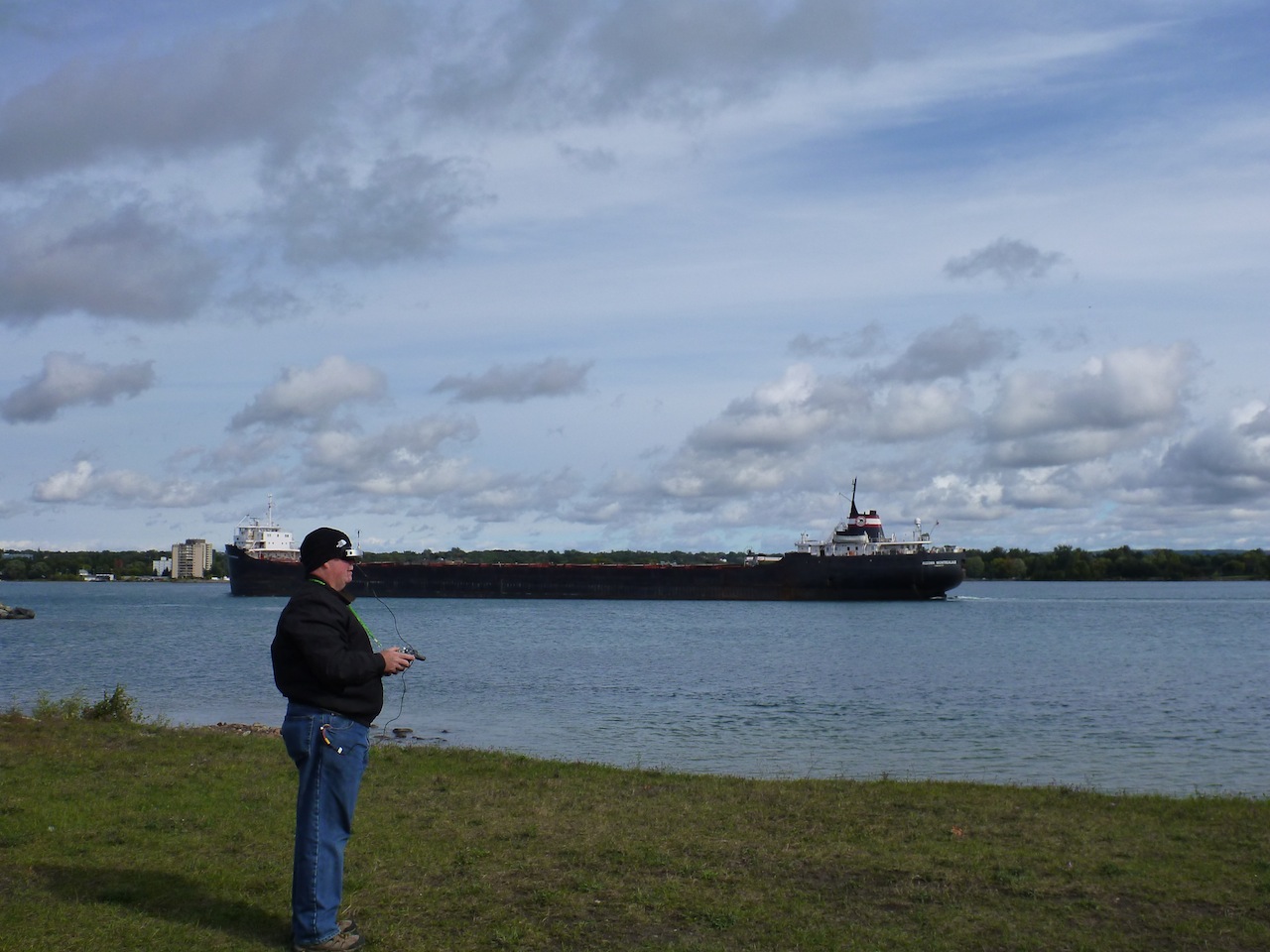 David Flying The Quadcopter Around The Ships 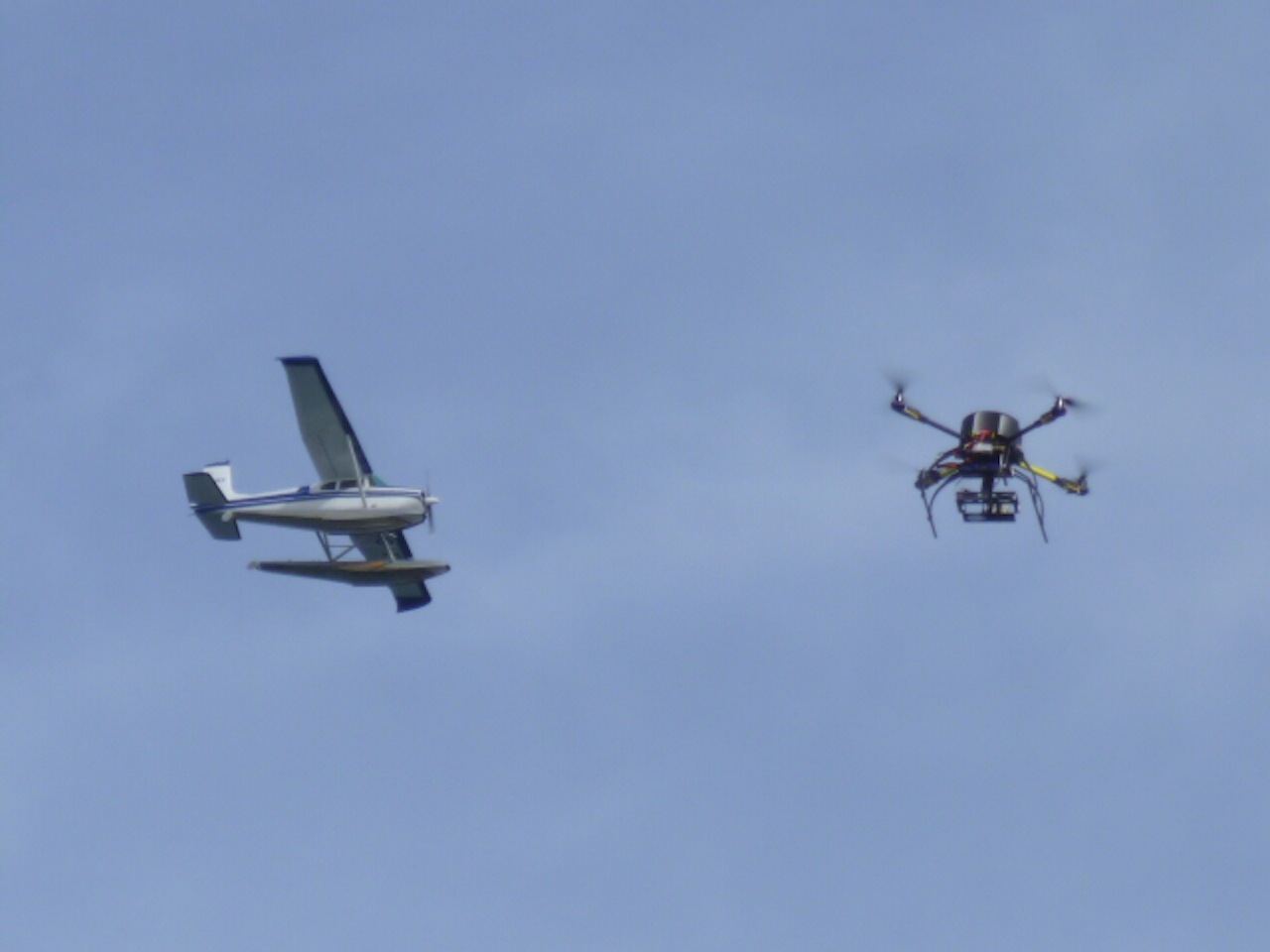 David Flying The Quadcopter And A Seaplane Happened To Go By. Thanks To Debbie Jelen For The Great Photo.

As you can imagine, David draws quite a crowd when he has his FPV (First Person View) goggles on and is flying around.  A nice woman that we met, Debbie Jelen, had taken some great shots of the quadcopter and sent them to us.  She shot the above picture of the copter with the seaplane.  So Thank You to Debbie Jelen for the pictures.  We think it’s quite funny that the copter looks as large as the seaplane.  She just happened to be focused on the plane and David took off and got in the shot just at the right time. 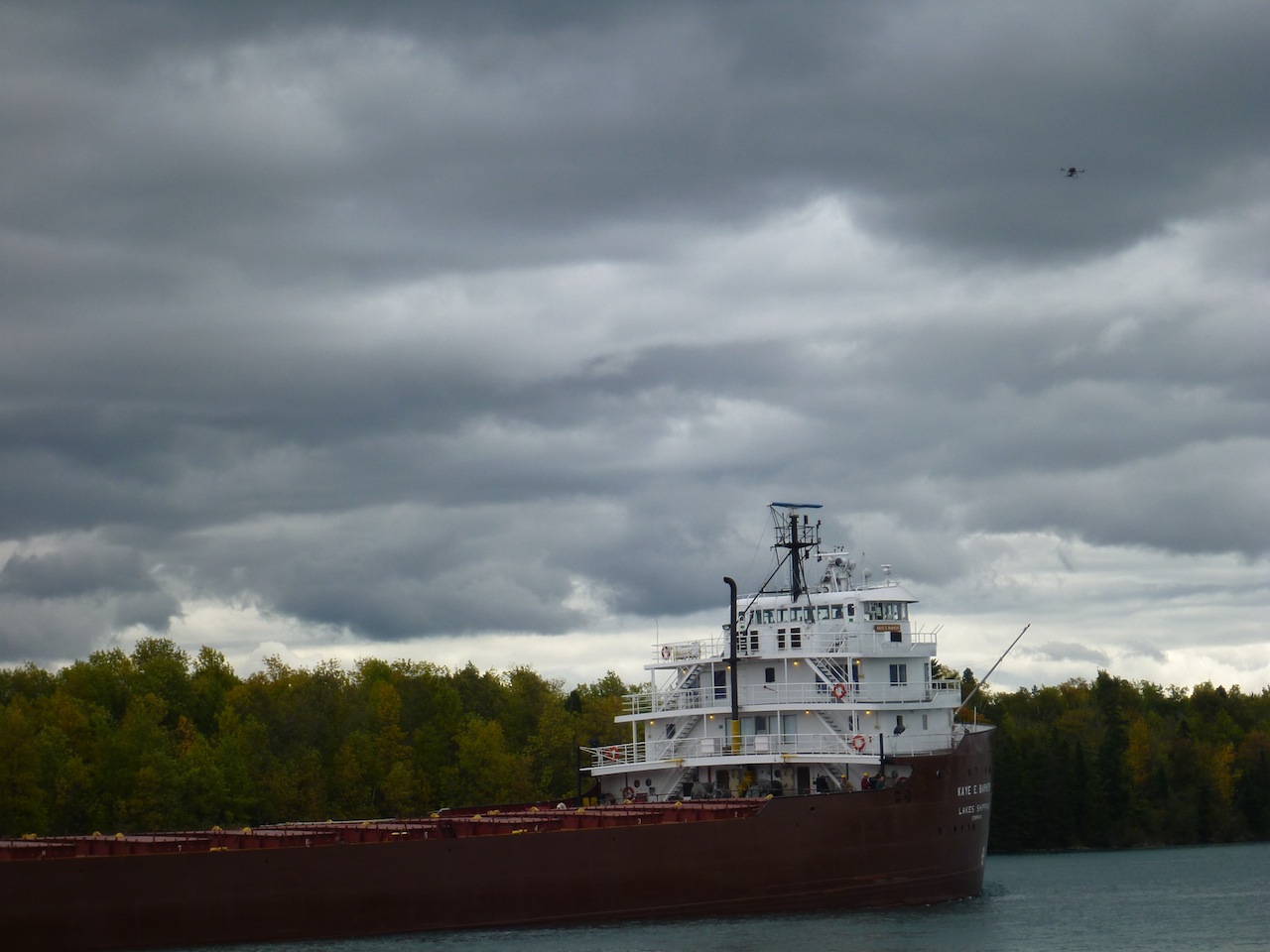 On top of just watching the large freighters go by, which can get addicting by the way as you find yourself running outside every time you hear a horn, you can go to the famous Soo Locks and watch them transcend from Lake Huron to Lake Superior and vice versa via the St. Mary’s River.

The Soo Locks are considered one of the great wonders of the world and is still the largest waterway traffic system on earth! Sault Ste Marie itself is actually the third oldest continuance settlement in the United States being established in 1668.

The St. Mary’s River is the only water connection between Lake Superior and the lower Great Lakes.  With a section of the river dropping 21 feet and creating the St. Mary rapids, this was a great barrier in getting the ships to the lower Great Lakes.  Thus the locks were formed.  The first lock was actually built in 1797!  Trying not to bore you too much, there’s a lot more great history on the Soo Locks and the area that can be found here.

It’s fascinating to watch these giant 1000 foot ships go through these locks. 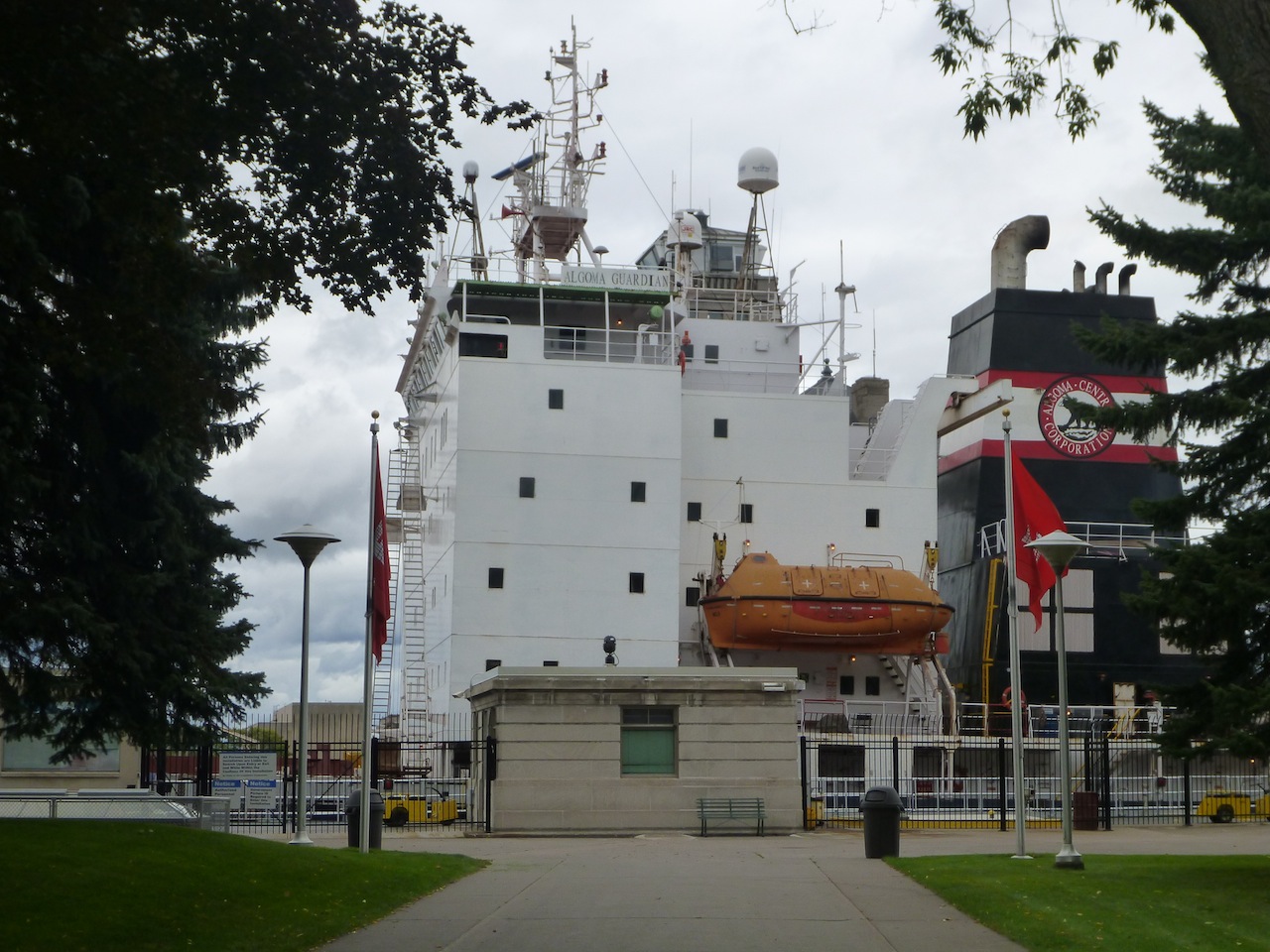 A Ship Entering The Locks. Note The Small Building On The Land In The Foreground Of The Picture.

You enter the lock viewing area through a park that is controlled by the United States. It’s a tightly secured area. They do have a nice visitor’s center that gives the history of the Soo Locks and also posts the times, for that day, of ships passing through the locks.

When we were approaching, a ship was just heading into the locks area. As you can see in the above picture, the ship towers over the little security building on the ground. 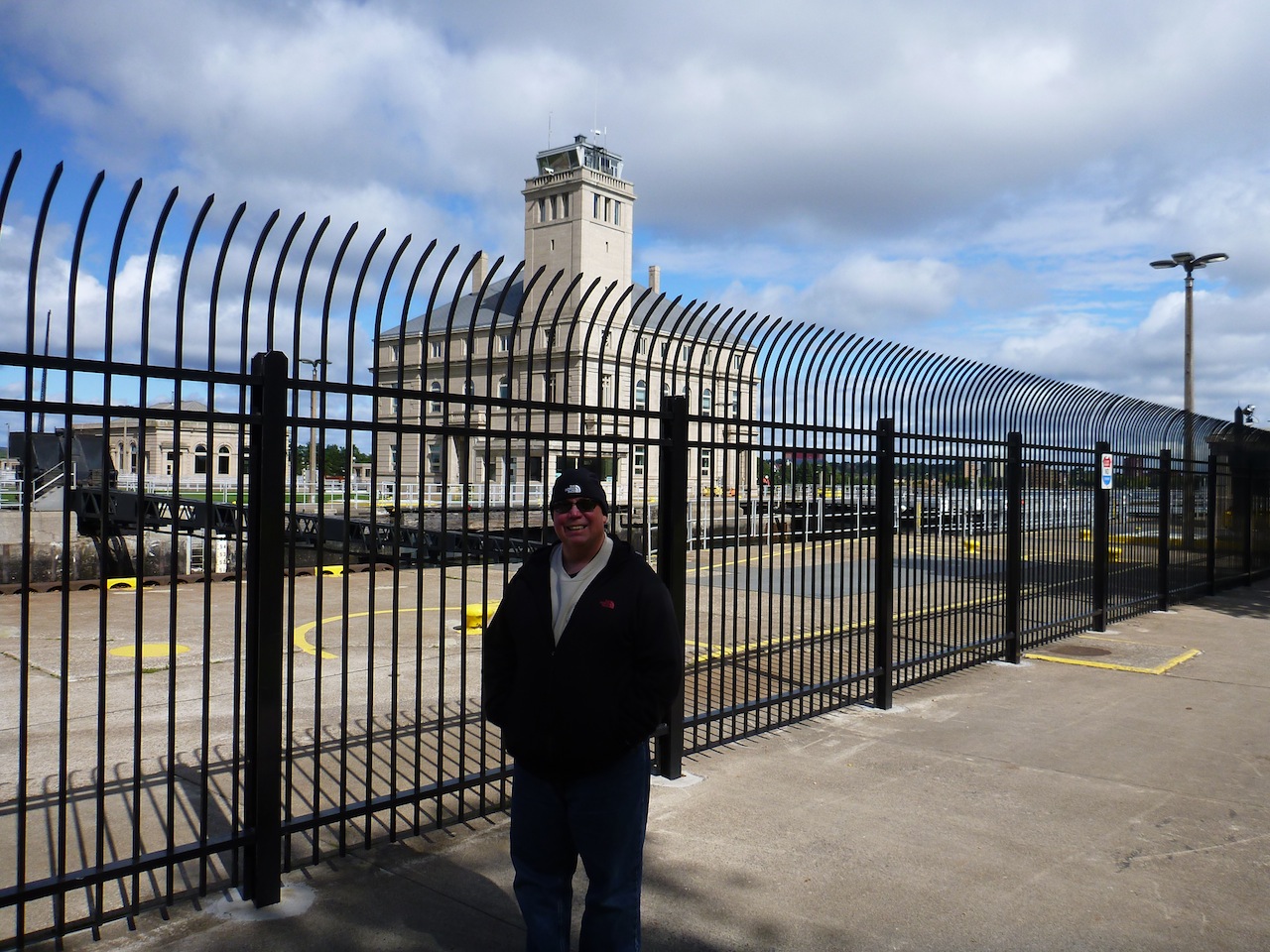 David And I approaching The Secured Area To View The Locks 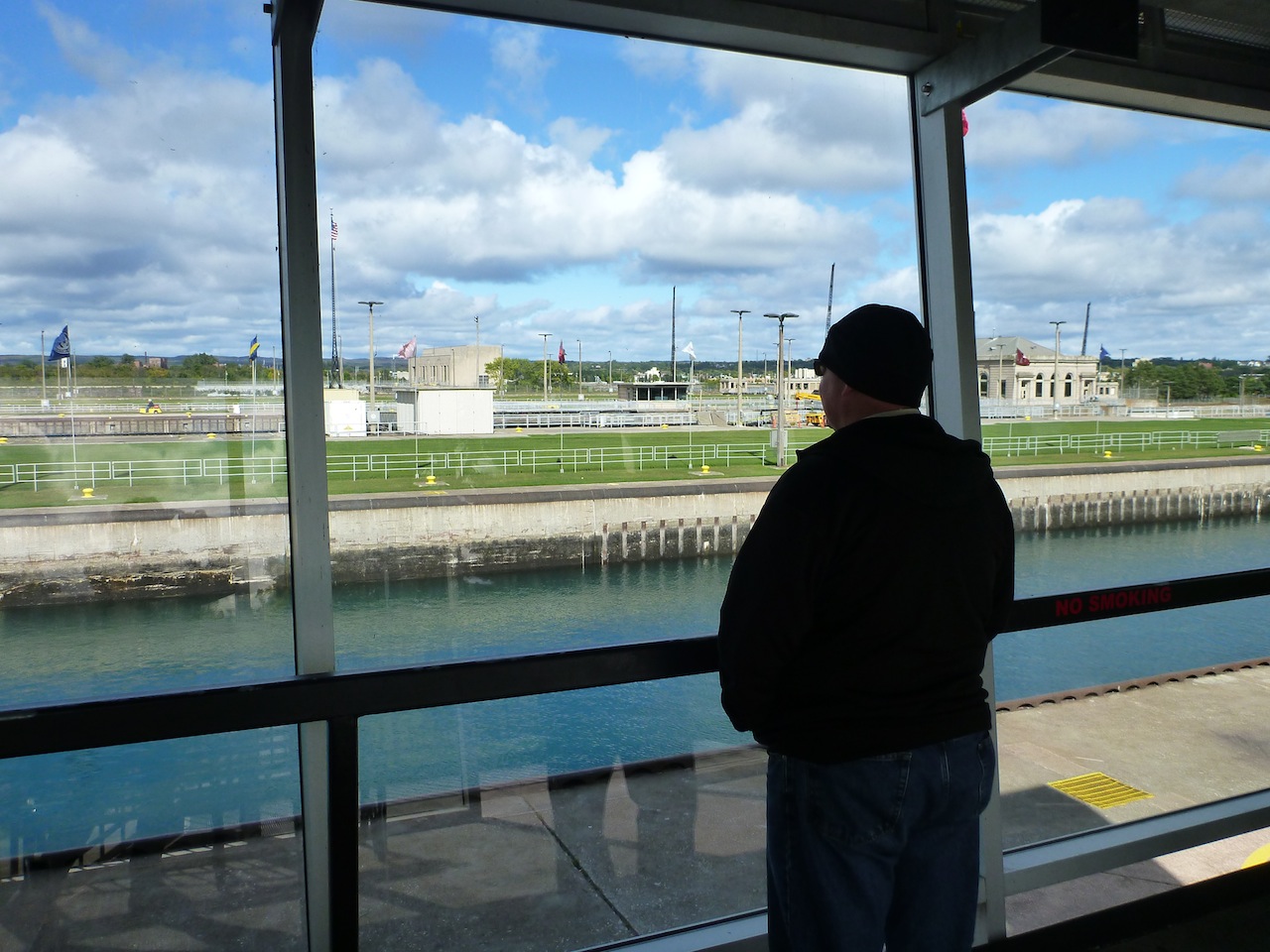 The Viewing Area Of The Locks

The park has a nice viewing area that’s mostly enclosed.  Nice for when there’s bad weather. 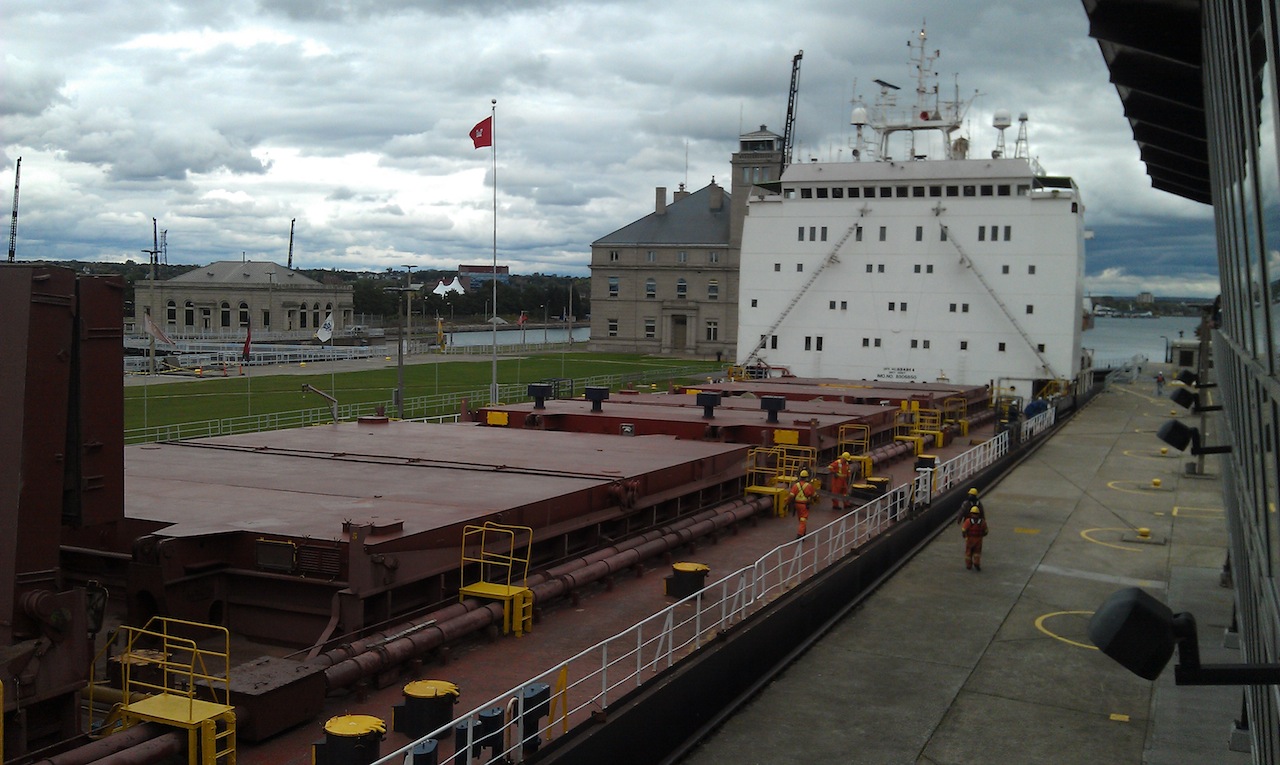 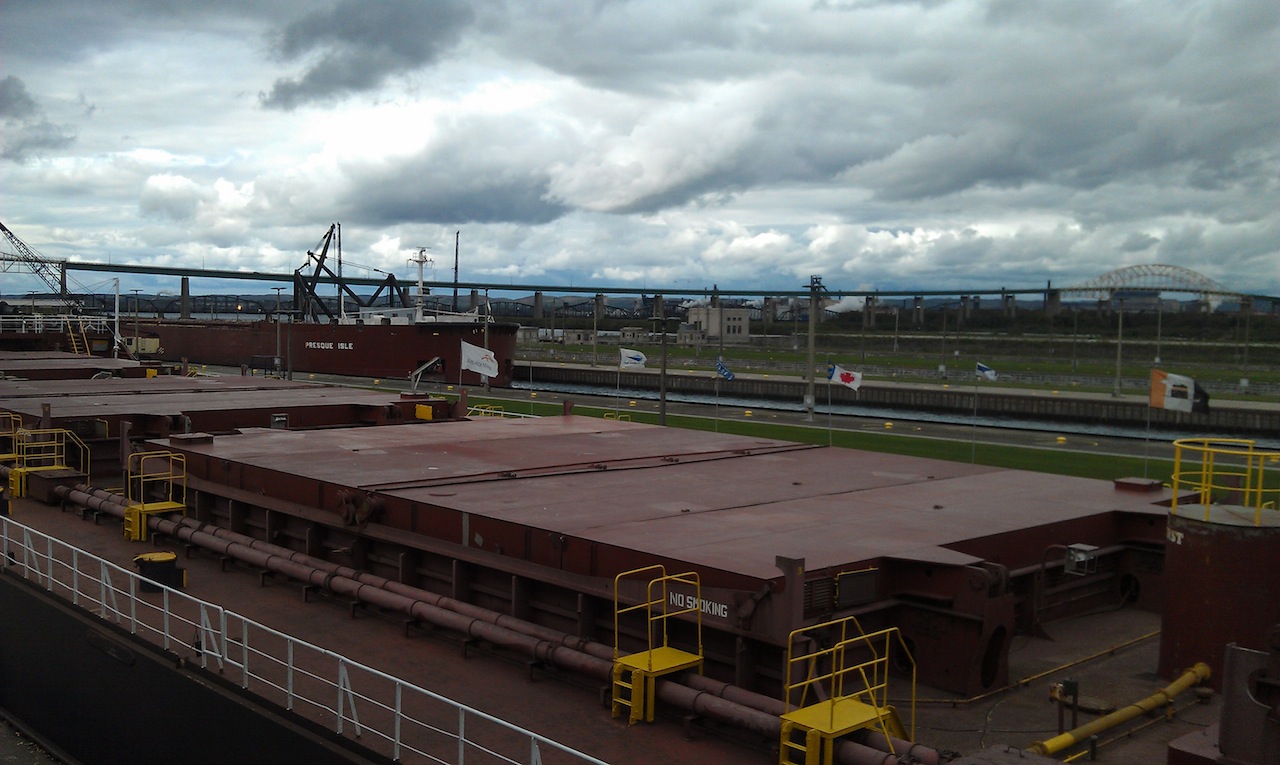 Ships Entering Locks From Both Directions 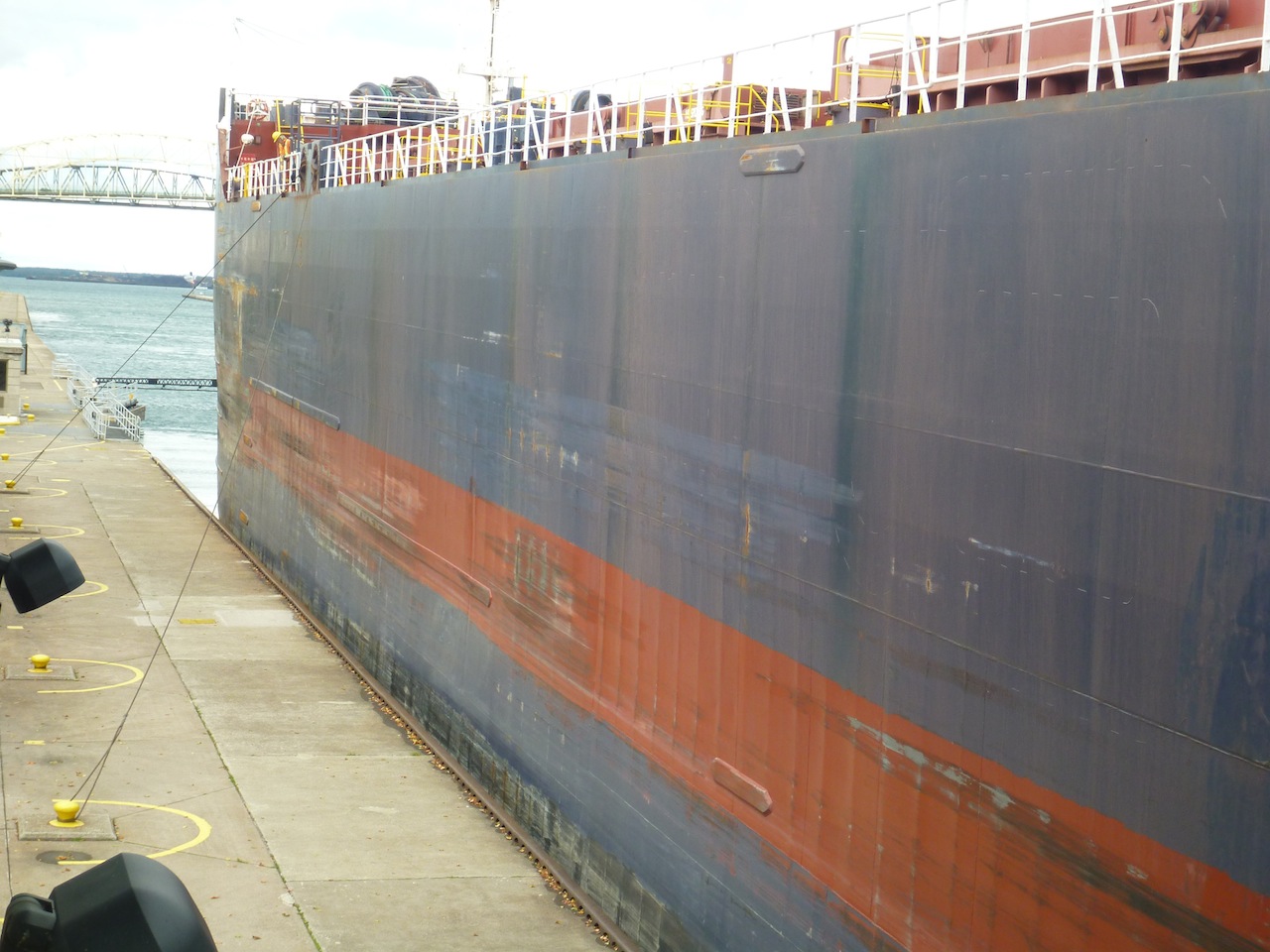 The Ship Heading Towards Lake Superior Raised The 22 Feet Now 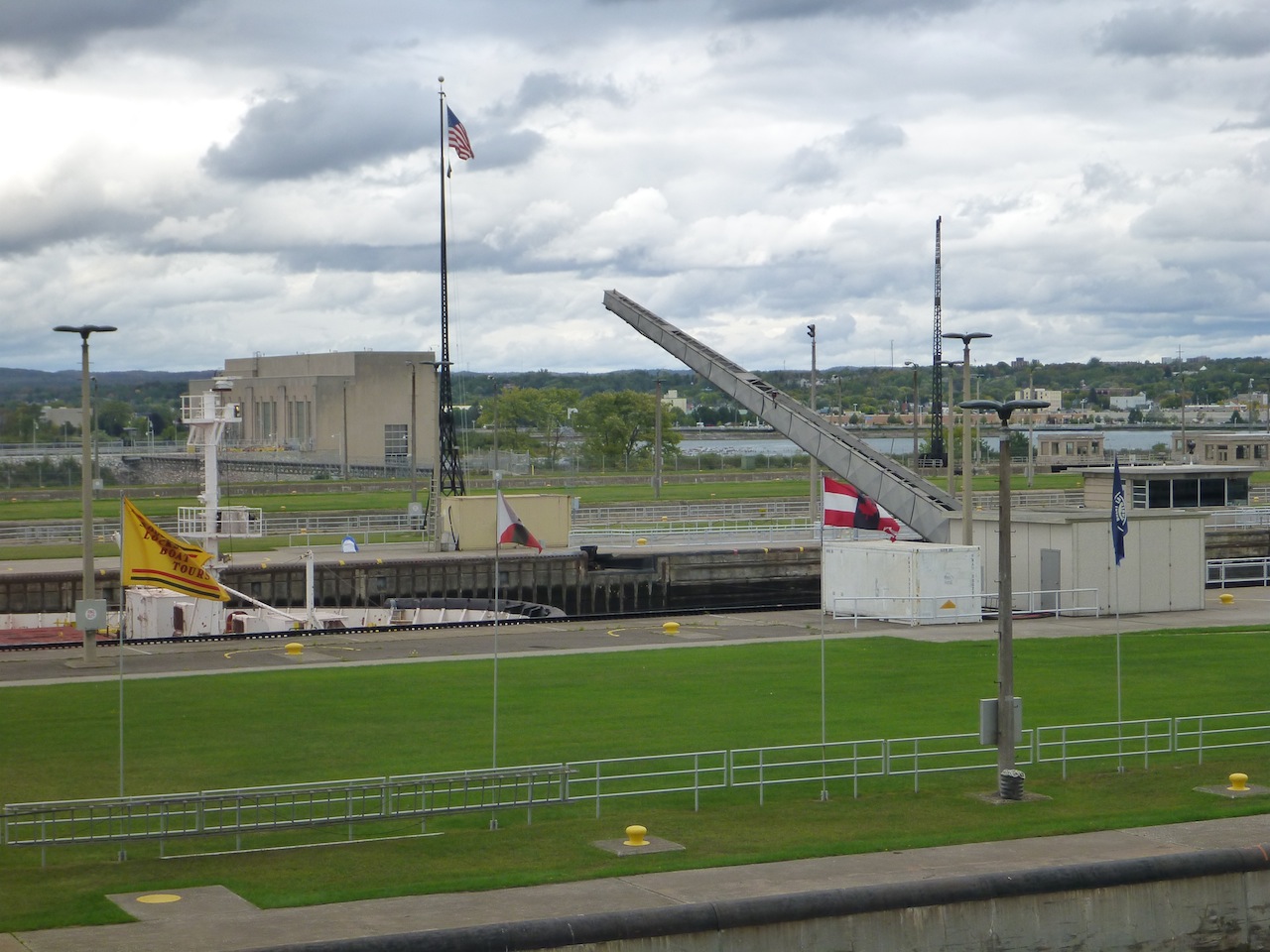 Here Is The Other Ship Lowered Now Those 22 Feet. It’s Now Ready To Head To Lake Huron.

After only about 10-20 minutes, yes that’s all, the ships are raised and lowered, all just by gravity of the water, to the appropriate heights to continue on their voyage.

We found this fascinating. OK…so maybe I found it a little more interesting than David.

He did have a good time flying around the campground and the area though. He even flew out to the ships, around the ships and past the ships. Making me very nervous flying over the water. Not to mention the international waterways and the security of the border.

One time we saw a ship coming and waited to take off, hoping the ship would see us on the shoreline. Sure enough, David flew right out to the top deck of the ship and the Captain gave us one prolonged and two short blasts of his horn. This was a Captain’s Salute! Then the Captain himself leaned out the window and waved at us. That made our day! Sorry to say we did not get it on video. We were to far away to really see that.

Below is the video that David made for this area. We hope you enjoy it as much as we enjoyed making it.

You know, we always seem to learn something new on these trips that we take.  Like the Great Lakes and this area.  We have a house in Rochester, NY and we live only 10 minutes from Lake Ontario.  We have never really thought about the long history of the Great Lakes and the commerce that takes place every day on these waterways.  Even though we live by a Great Lake!  We’ve only thought about the recreational side of it.

Now we know and we will never look at our Great Lake, Lake Ontario the same.

Dad! Whatcha doing dad! Can I help? Dad here: I

Gotta work today. Dad had to take the car in for a