How Our TPMS System Saved Us From A Worse Situation 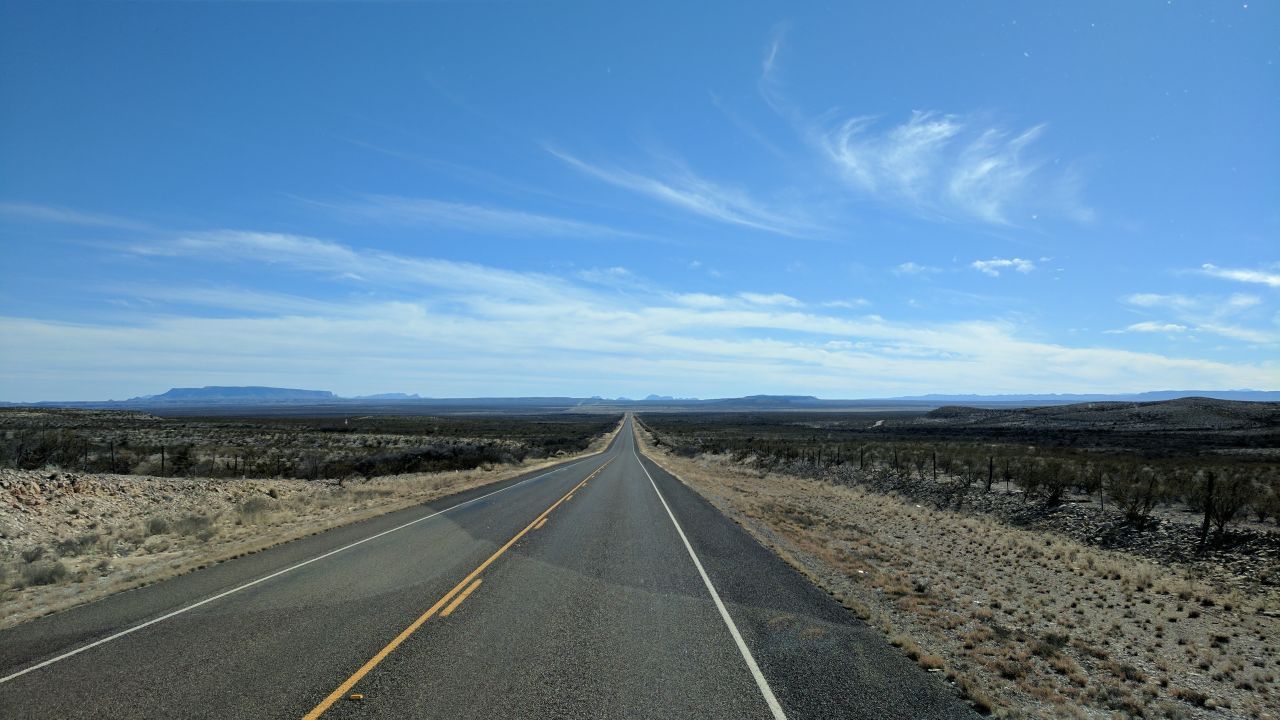 Out In The Middle Of No Where In Texas

When you find yourself driving to Big Bend National Park in far west Texas, you drive along some very desolate roads. You may not see another soul for miles.

This is not where you want to find yourself with a problem. And recently when we were driving down some of these roads, we found ourselves in such a situation.

You see, we were just driving along, admiring the scenery and isolation when all of a sudden our EEZTire TPMS started beeping at us. David was driving at the time and he noted that our rear passenger tire on our tow vehicle was steadily loosing pressure. Of course we were in the middle of no where without another soul around and we were on a 2 lane highway with little options to pull off. But the lucky part…we were in a construction zone. Lucky?

Yup…you readthat right. We were in a construction zone in the middle of no where. However, as luck would have it, because of said construction zone, they had widened the highway with an extra driving lane, as they had one of the normally used driving lanes closed off with cones for them to work on.

Seeingwe were also driving on a Sunday, it made the roads more desolate, however, it also made the construction zone a perfect place to pull over as no one was working at that time. So yes, we pulled over, through the cones (which thank goodness were spaced far enough apart for us to squeeze through) and onto a construction area. Which, looking back on the situation, we have no idea what they were actually doing to the road. It wasn’t freshly paved and it didn’t really have any signs of being worked on recently, other than the cones. Oh well….I shouldn’t take it for granted since it really was a perfect place to pull off safely, out of traffic, if their was any. 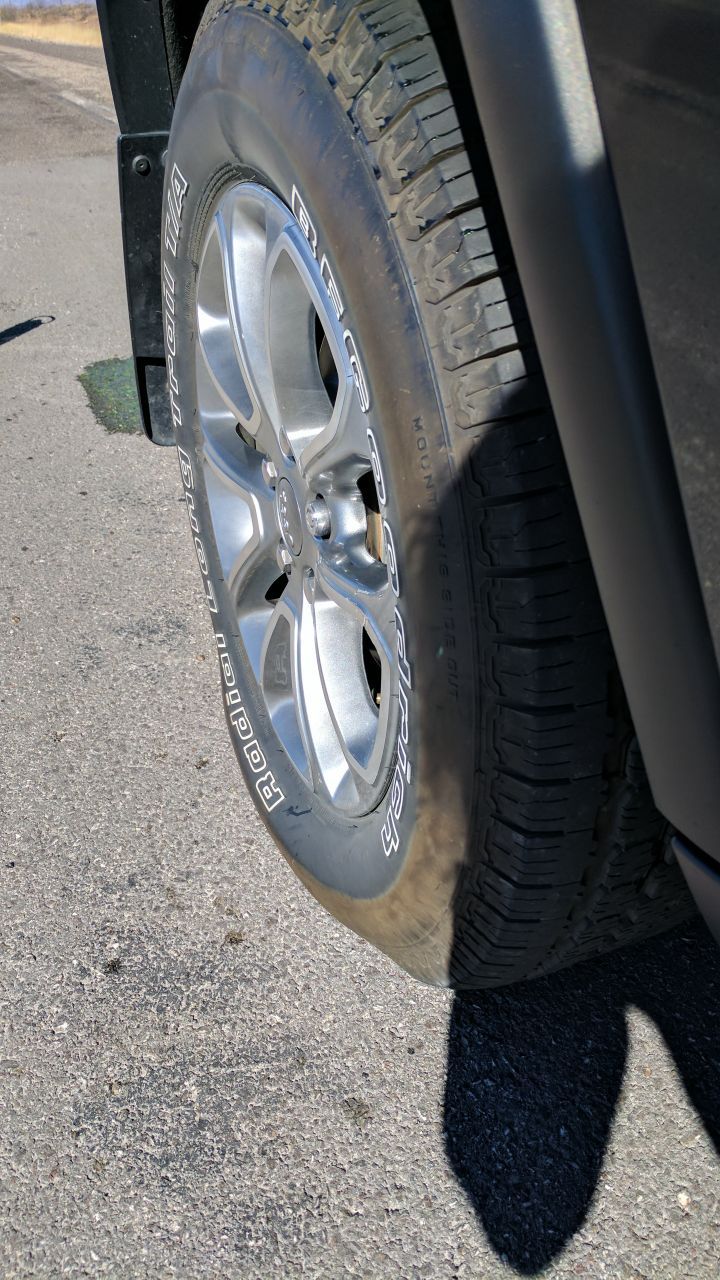 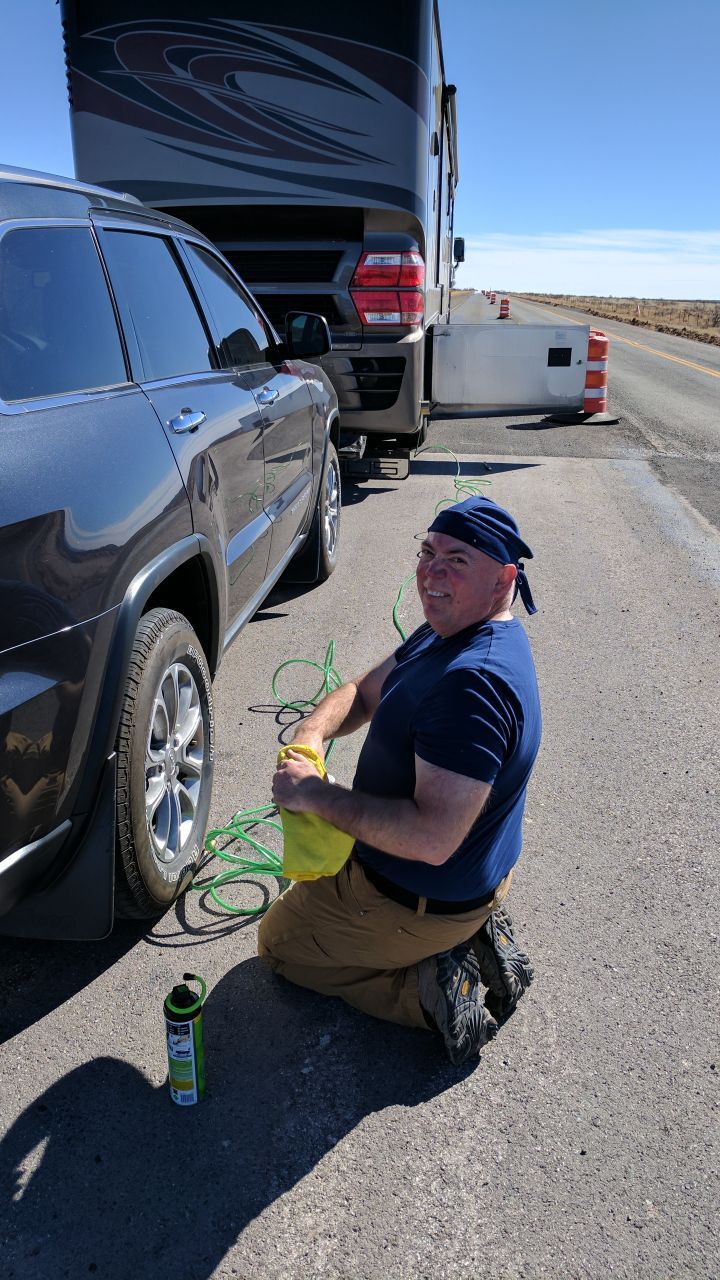 David Trying The Green Slime To Plug Hole In Tire 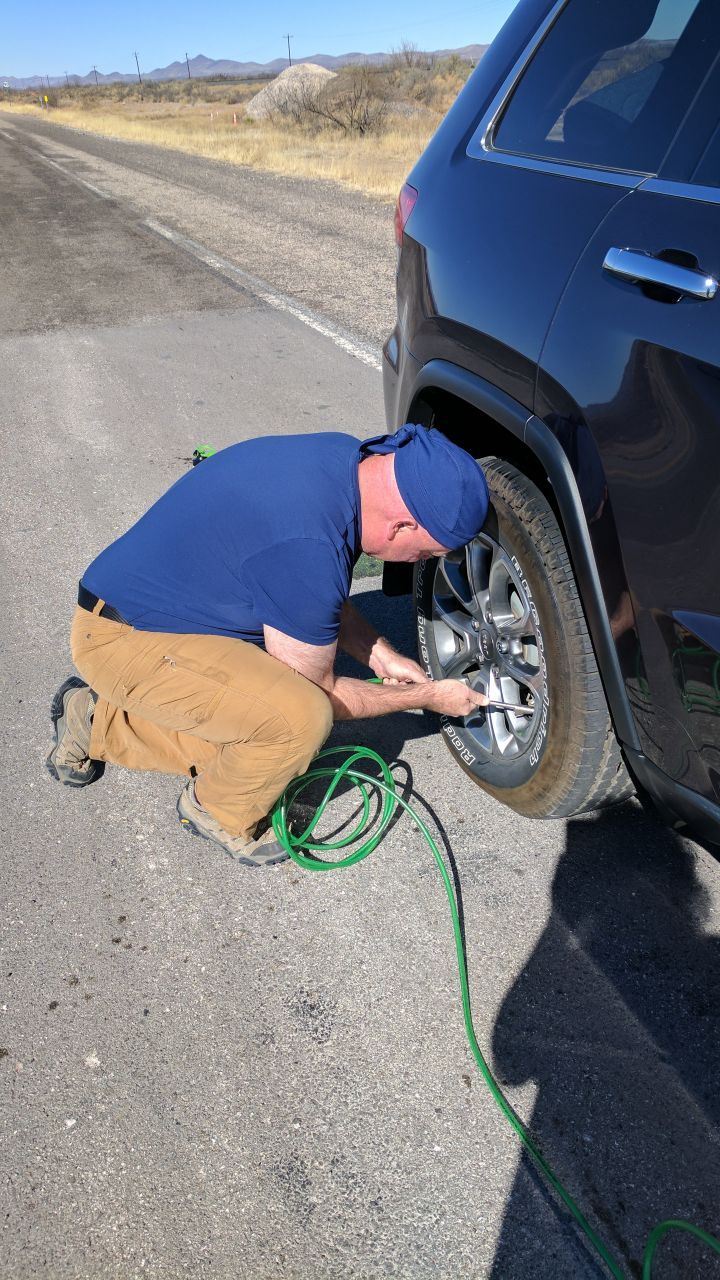 So what to do next? Well, after examination of the rear passenger tire on our Jeep, David determined that we had picked up a nail or something, in the construction zone of course, and it made a nice big hole in the tire. So air was rapidly escaping.

A tire patch kit would come in handy right about now.

Alas, we did not have one. We thought we were prepared for everything. We had a spare if need be but David wanted to try to seal it first. So we did have some Green Slime for car tires.

The theory is, you take the cap off your tire and add the Slime inside the tire. Then air up and driveso the Slime oozes (technical term here) aroundon the inside of the tire. The way it works is when air hits the Slime, it hardens. So when you roll the tire, in theory, as the air wants to get out of the tire at the hole, air hits the Slime as it tries to get out and thus sealing the hole. Umm….you heard me say, in theory right? Well, We think our hole was just too big for the Slime to seal it properly. So most of it oozed out of the tire, through the hole. Live and learn. (If it had worked, you want to be sure to get the tire to a repair shop as Slime is not meant as a full repair.)

So plan two. David took a piece of rag with Slime on it and shoved it into the hole, plugging it in a sense. All we needed to do was limp to the next town, which was only a few miles up the road. Well, once we got some air into the tire and saw that it was holding pressure, that seemed to work long enough for us to get to the next town. That town was Valentine, Texas. Now Valentine, TX, as of the 2000 census, has a population of 187 people. And of course, this being Sunday, everything is shut down for the day and there is not another person in site. So we pull over into a parking area while David tries to patch the tire again. You see, at this point, we determined that we could not just change our tire too easily as the lug nuts were on there really tightly. 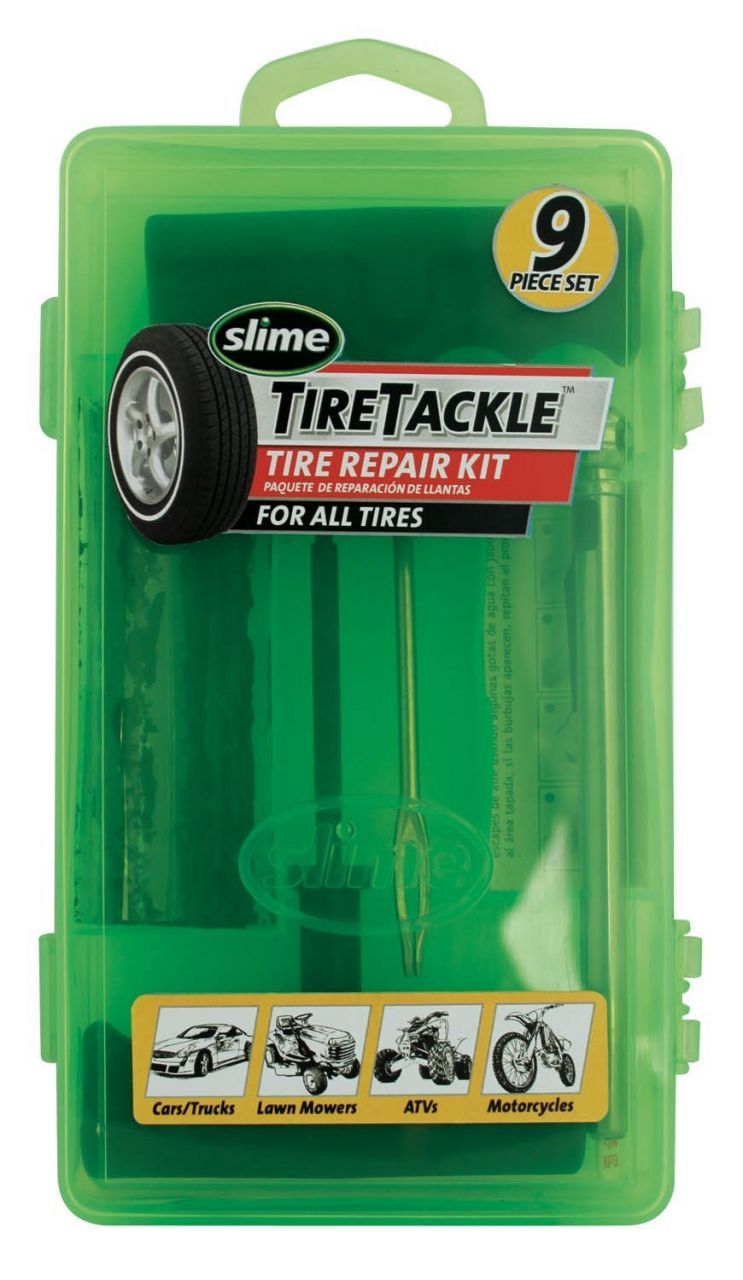 As David was working on the second plug, low and behold, a Good Samaritan (GS) who lived in Valentine came along and asked if we needed help. David jokingly said, well, if you had a patch kit that would help a lot. The next few words the gentleman said were a mystery as his west Texas accent was undecipherable to us upstate New Yorkers. He then took off in his truck and we pondered what he had said while trying to work on plugging the hole. About 20 minutes later, the GS came back and low and behold…he had a tire patch kit! Exactly what we needed! After talking to him a little bit more, we discovered he did not have a patch kit but his neighbor did. So he drove off to his neighbors house to retrieve it.

And before you say it, yes, we do have CoachNet Roadside Service. I actually was on the phone with them, in Valentine, TX, as the GS pulled up with the patch kit.
NOTICE: We just got off the phone with Costco where we purchased the tires last Sept 2016. We wanted to set a time to come in and have the tire checked and repaired properly if needed. We were told because we did a patch on the road, the tire warranty provided by Costco may be VOID. 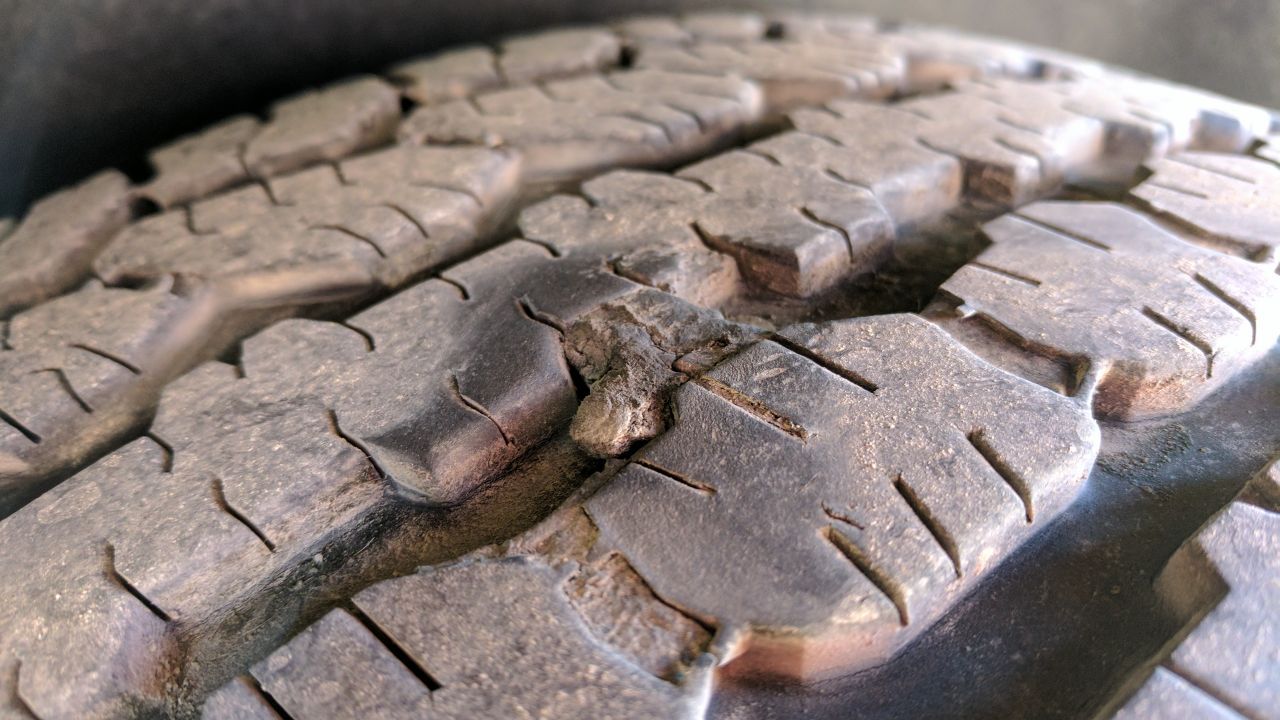 Tire Patched And Ready To Roll

OUCH! So, while we will still carry a kit, we may think about it next time depending on where we are. We never would have thought that fixing a tire with a tire repair patch would void your warranty and we will find out for sure when we see them next week.

So back to the title of this post…How the TPMS system saved us from a worse situation. Well, that is totally true. If we did not have a TPMS system, air would have steadily leaked out of the tire without our knowledge until it was completely flat. We would have ended up dragging our Jeep down the road, on the rim and shreddingthe tire and then starting rim damage. Itis way too easy to drag these tow vehicles down the road with the torque that is behind these giant diesel pushers. Sad to say, we have seen it happen. So a TPMS system will alert you to a leak or a high temp on your tire or what have you, before it becomes a bigger problem down the road.

Here is our blog post and video on why it’s important to have a TPMS system.

And the lesson that we learned was, no matter how seasoned an RVer that you are (we’ve been traveling since 2008), there is always something to learn. We learned that we were not as prepared as we thought/hoped we were. We need to carry a patch kit no matter where we are and let’s face it, they’re cheap enough to always have one. Also be sure you carry a small air compressor to put air back in the tire. (In this case, seeing we had the coach, we used the air system from the coach.) Leave both the patch kit and compressorin the tow carso youhave it. After all, you never know when something may take place be it when the car is being towed, or you are driving it.. But rest assured, it is there for when you do need it. But ALWAYS, ALWAYS, be sure you have a good TPMS system!!! We use the EEZTire TPMS from EEZ RV Products.