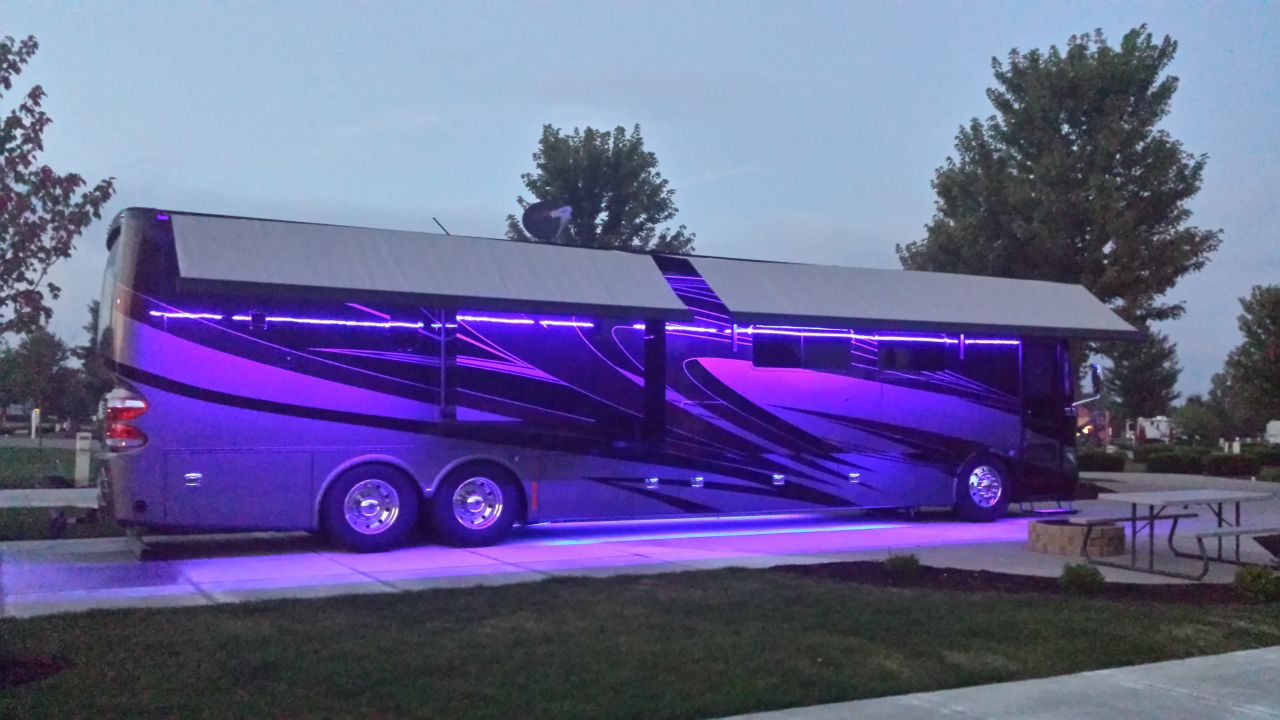 Our Coach At The River Ridge RV Resort

You know when you find a nice place and you just happened to be passing through for a couple nights and you end up staying a month? Well, that’s what happened to us when we came upon River Ridge RV Resort in Stanwood, Michigan. Located in the western region of Michigan, about 45 minutes north of Grand Rapids. 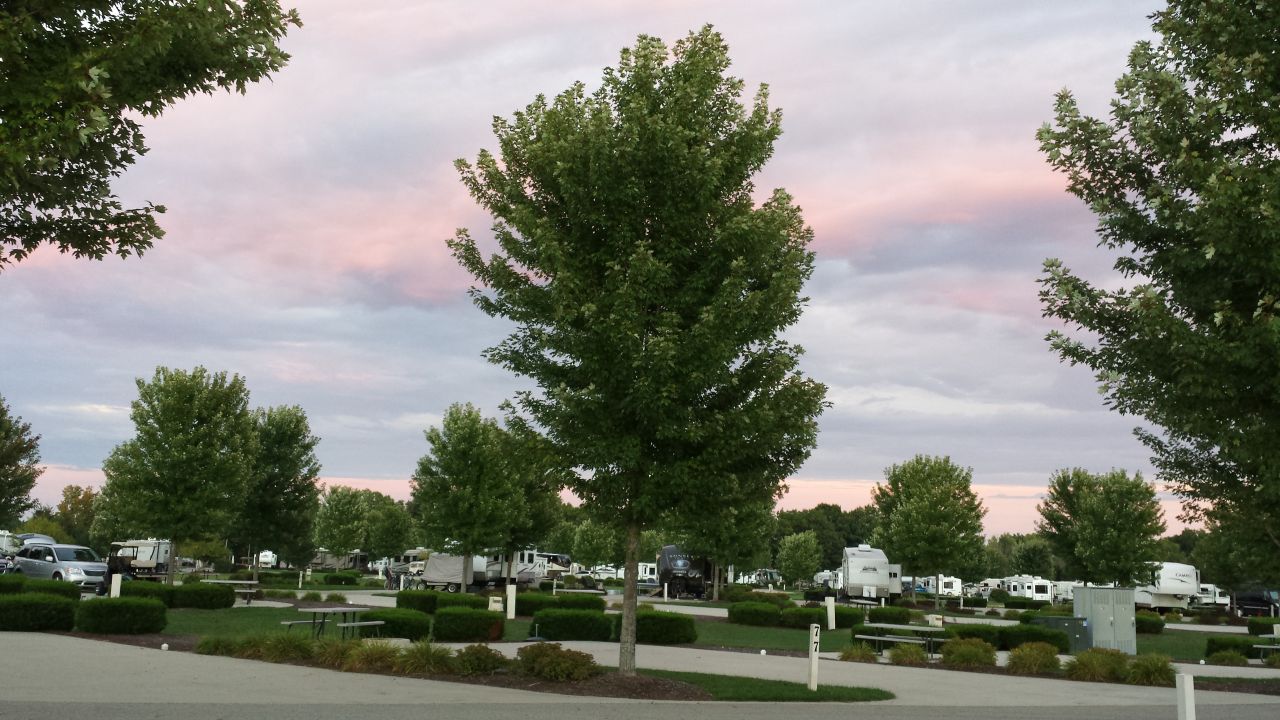 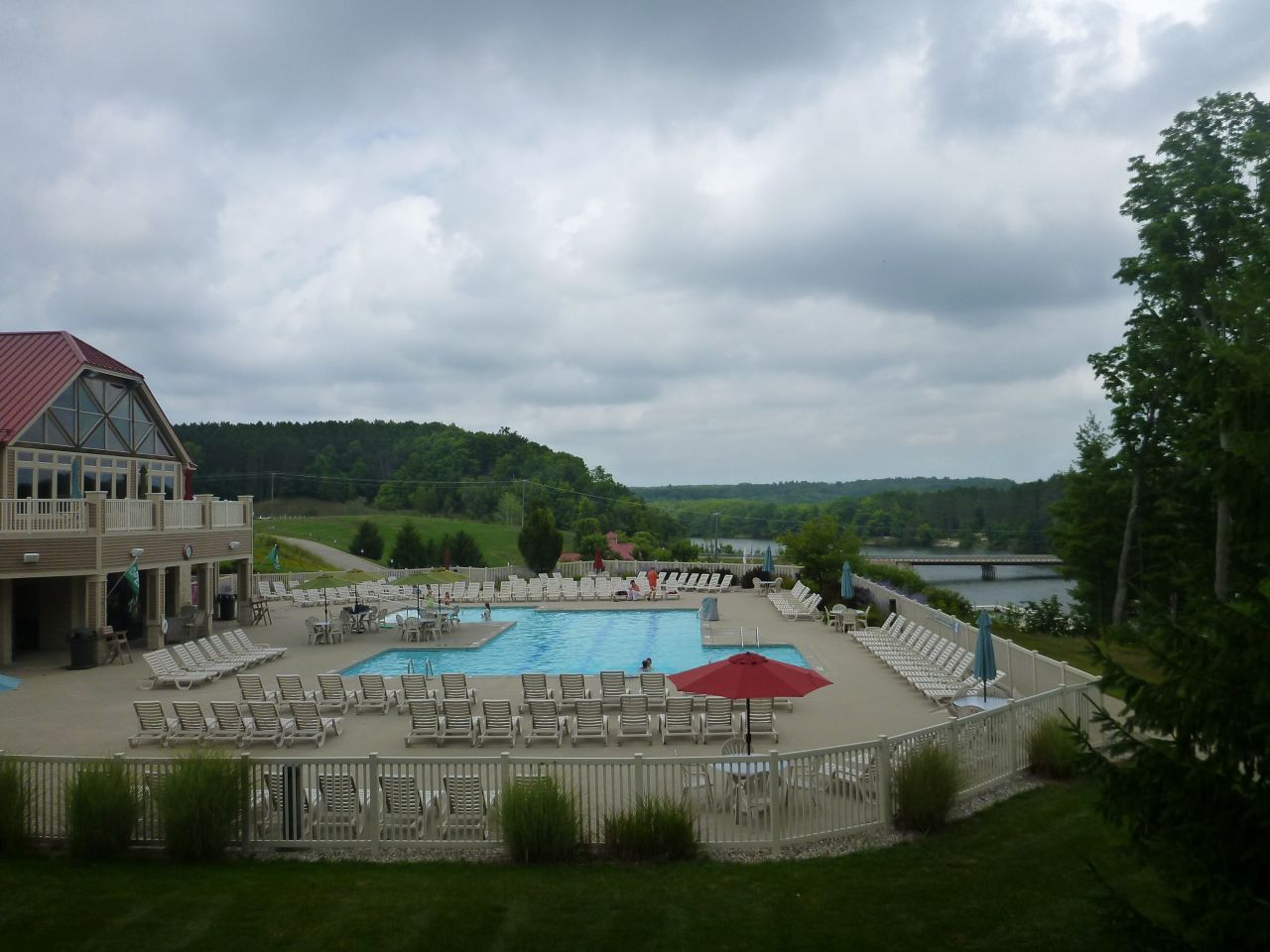 The Pool And Community Center At River Ridge RV Resort 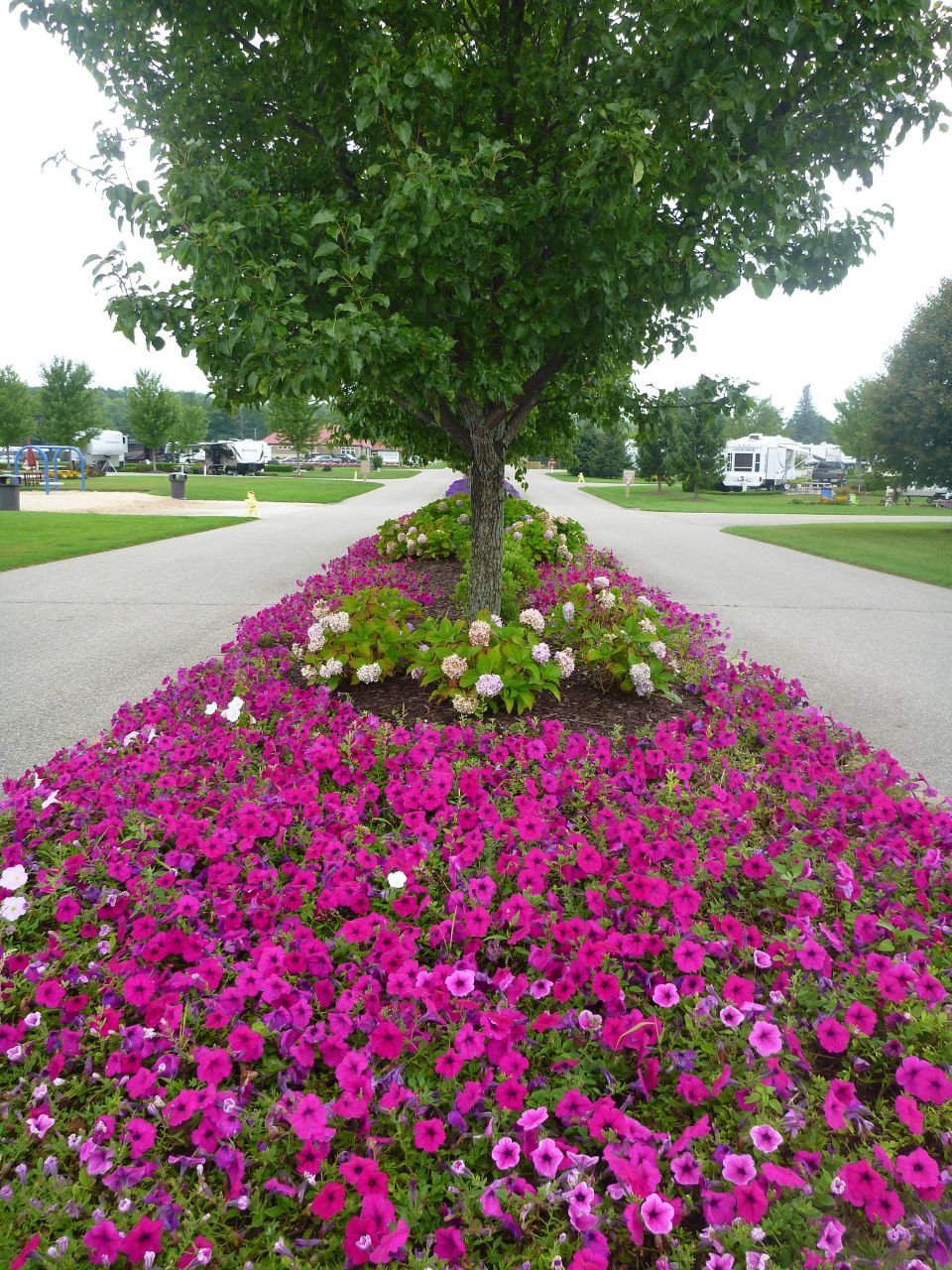 Beautiful Flowers And Landscaping Every Where At River Ridge RV Resort 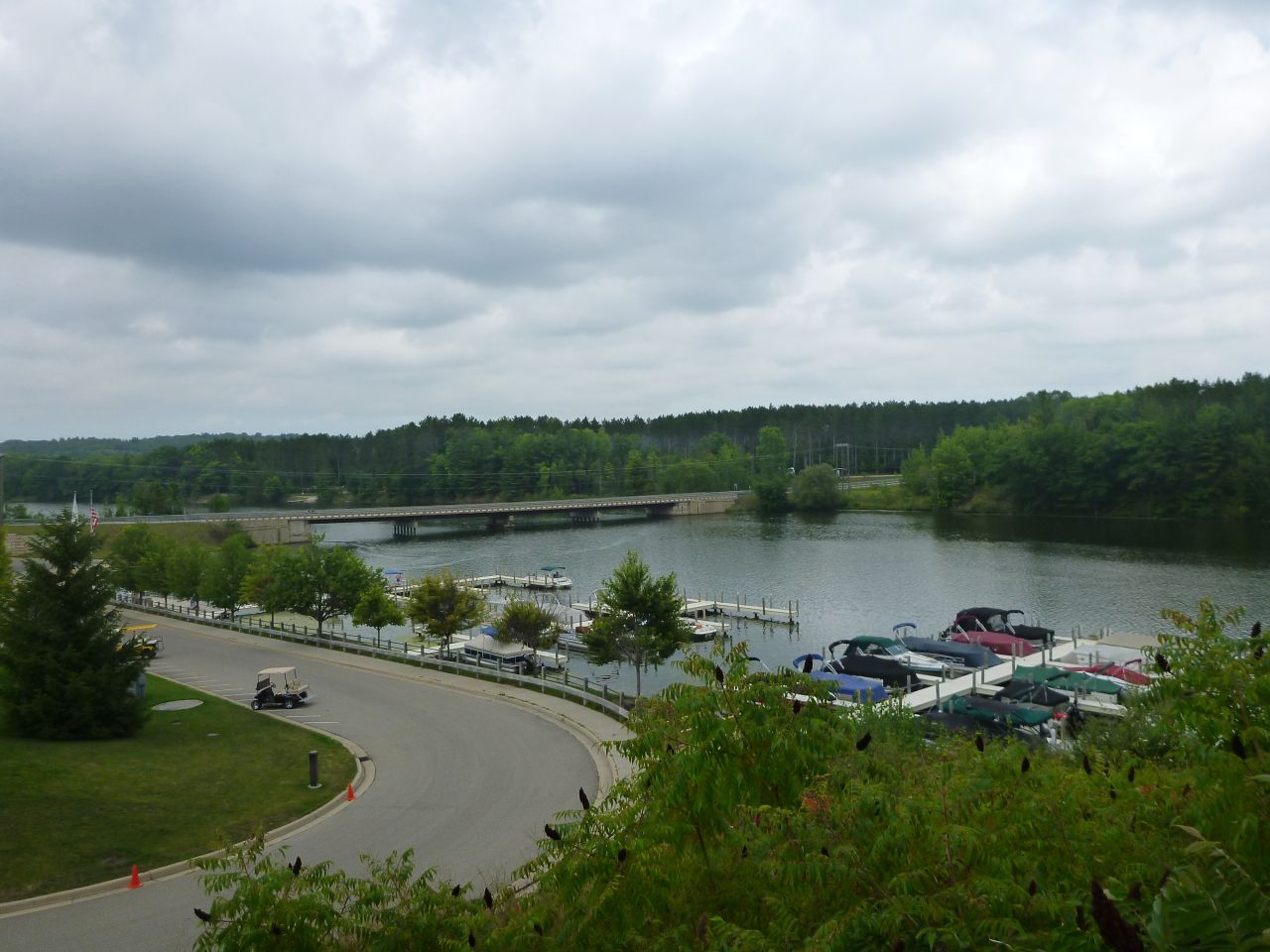 River Ridge RV Resort is one of those gems that you find in the middle of nowhere. By that, I mean, it’s in the Manistee National Forest, near the Newaygo State Park on the Muskegon River. However it’s only 2 miles from Interstate 131 and shopping and restaurants are just one exit up in Big Rapids, MI. Which is just a quick 10-minute drive.

Being out in the forest though Internet, cable and cell signal can be spotty. We have Verizon and without our booster we only had 1 bar, maybe. In the booster we were able to get 4 bars. So that’s doable for us. Someone with AT&T said they were fine with their signal.

As far as Internet, the park does have wi-fi hotspots in their office and the community center. However, upon talking with the park management, being where they are located, they are only able to get 3 Mbps into the park, two T-1 lines. That’s it. Now add in that they run their office off of that same 3 Mbps. Now you can understand why only the hot spots. Needless to say we ran off of our unlimited data phones.

We were excited to learn that a local company will be putting in a WISP tower just up the road. So next season, if all goes as planned with the tower going up, they are going to plan on having park wide wi-fi. Which in a resort of this caliber, you would come to expect. They went as far to even ask David to advise on the design. That then lead to asking us to come back in the spring to do the programming and over see the install of the system. We told them that it would all depend on when they could get more data coming into the park.

They do offer cable at every site, however, that is provided by a DirecTV distribution center in the office. So it’s essentially down converted to standard def. Not ideal but hey, you are here for the resort, not TV. Right? Good thing our satellite dish worked just fine.

It was very peaceful there. No trains. No planes. No traffic noise. 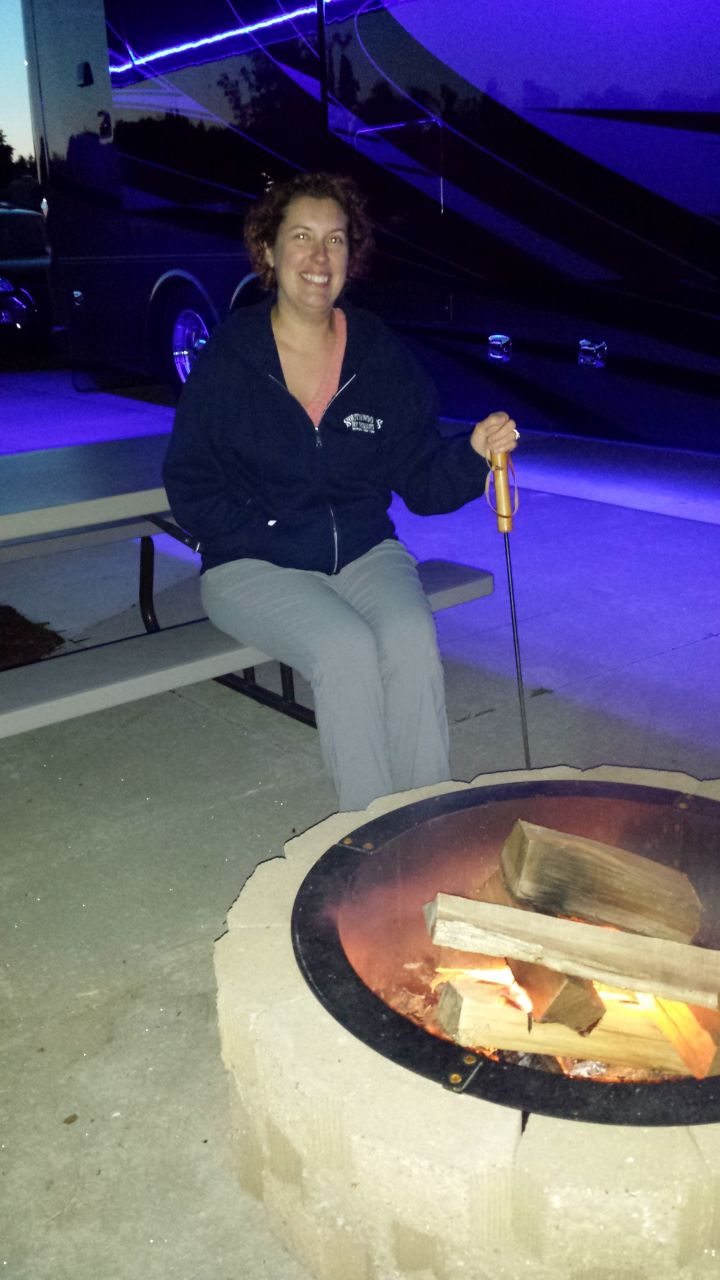 Enjoying The Campfire One Evening 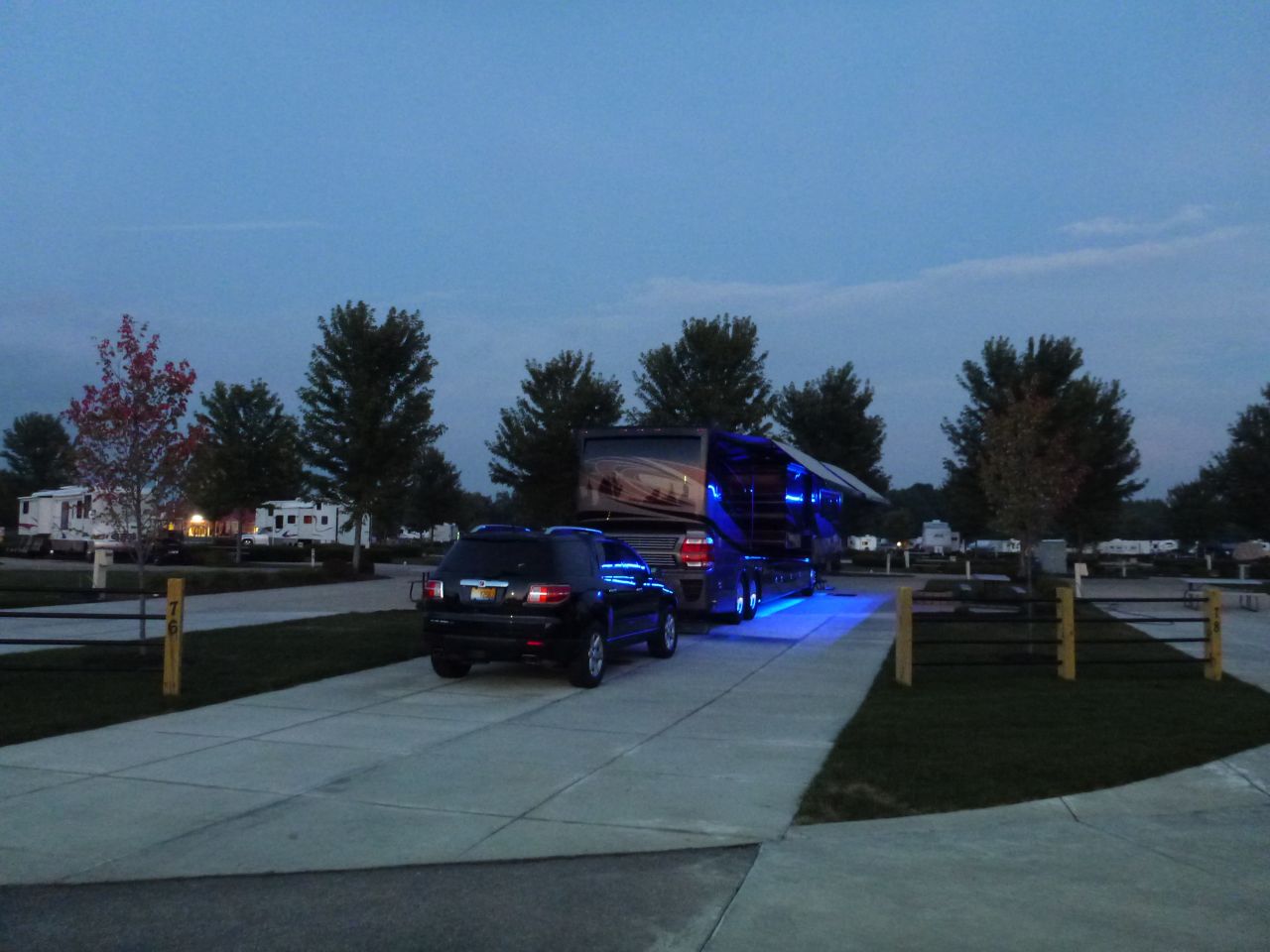 Pull Thru Sites Were Really Long And Wide

The pull thru sites are really long and wide and as you can see, cement. Most of the resort actually has cement pads. Plenty of room to fully set up our 45-foot Tiffin Allegro Bus and have lots of room for our tow vehicle and then some. Some of the back in sites would have been a little tighter for a big rig. However I did see some maneuver into a back in when needed. For a big rig the pull thru would definitely be the way to go. In my humble opinion.

This is a park where you can get a seasonal site, however there is a waiting list. The owner’s and the management are working on improving some of the sites and making more of them seasonal but don’t let that stop you from visiting. There are still plenty of transient sites available. And the seasonal sites are very well maintained to keep up with the resort landscaping. So no worries there.

There is a good-sized marina on the premises. So bringing your boat or personal watercraft along for your stay is encouraged. They also have an excellent store with all your essentials and a really good grill and ice cream shop that makes some really good chocolate malt shakes. Not that I would know anything about that. 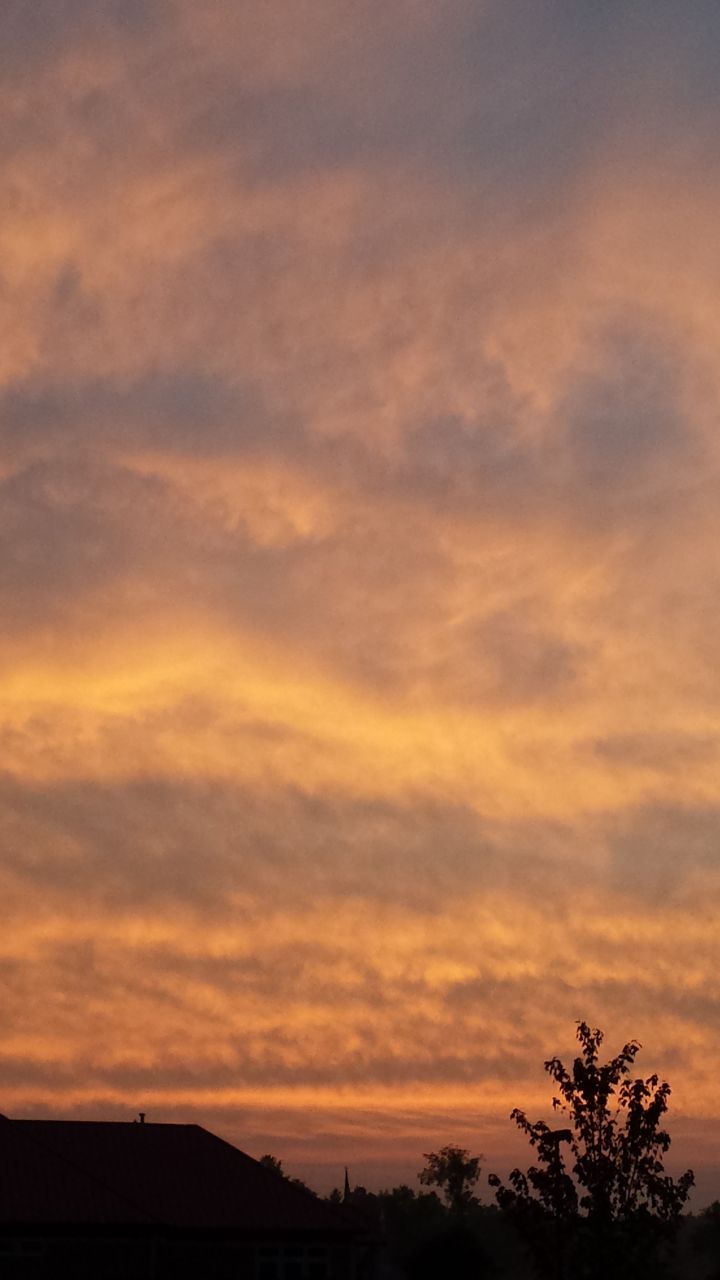 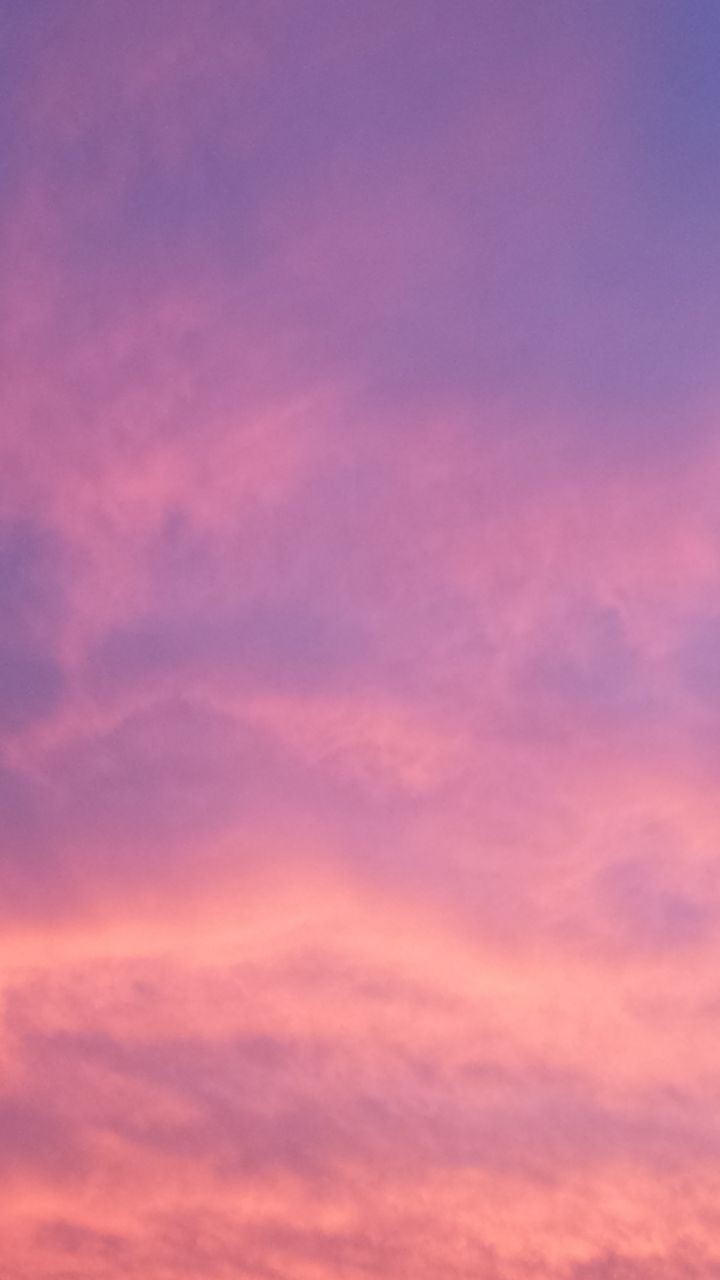 There were some gorgeous evenings when the sky just lit up. One moment it was orange and the next it was purple. Simply breathtaking. (Non-retouched photos.) 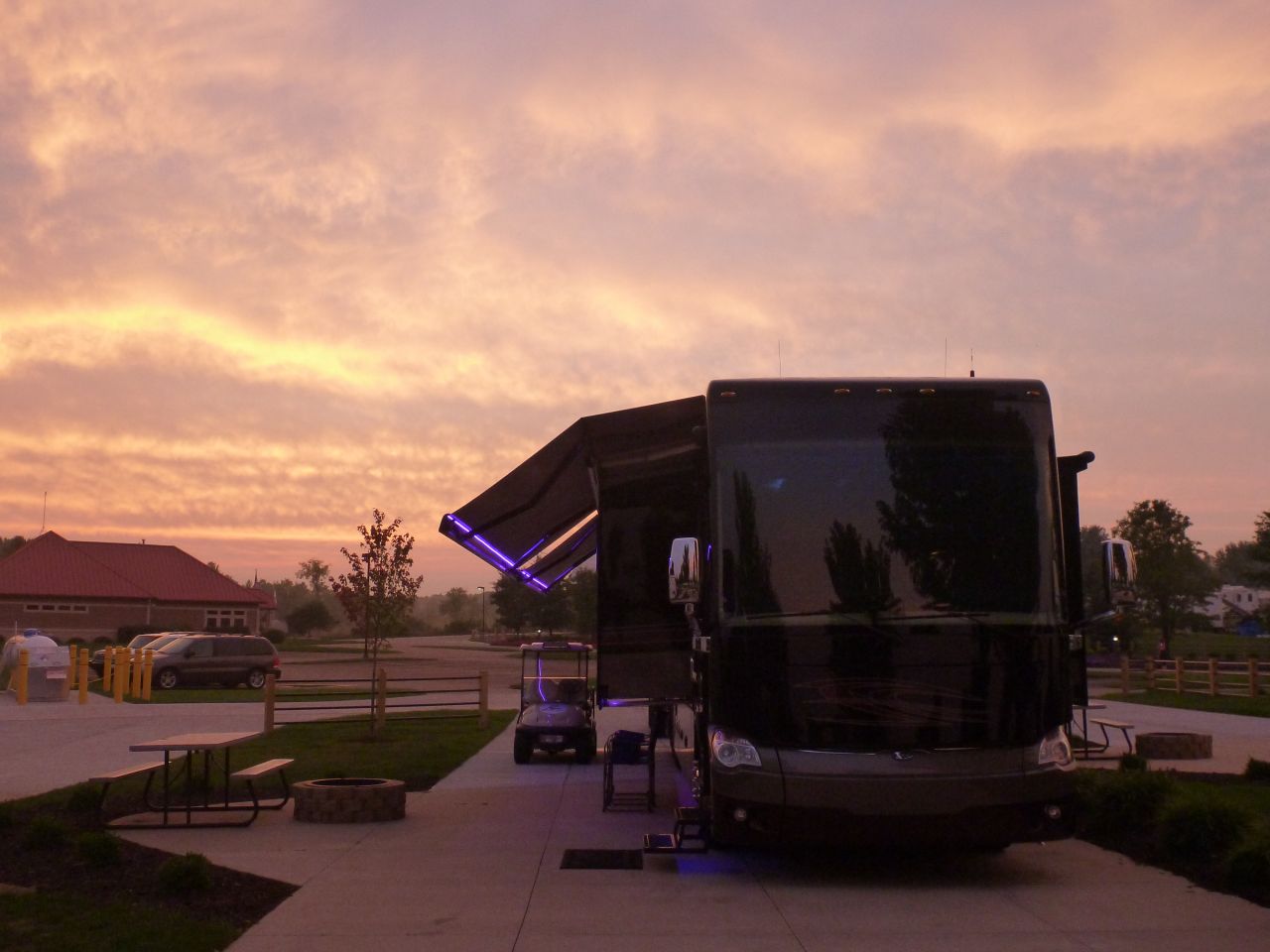 Our Coach And A Beautiful Sun Set 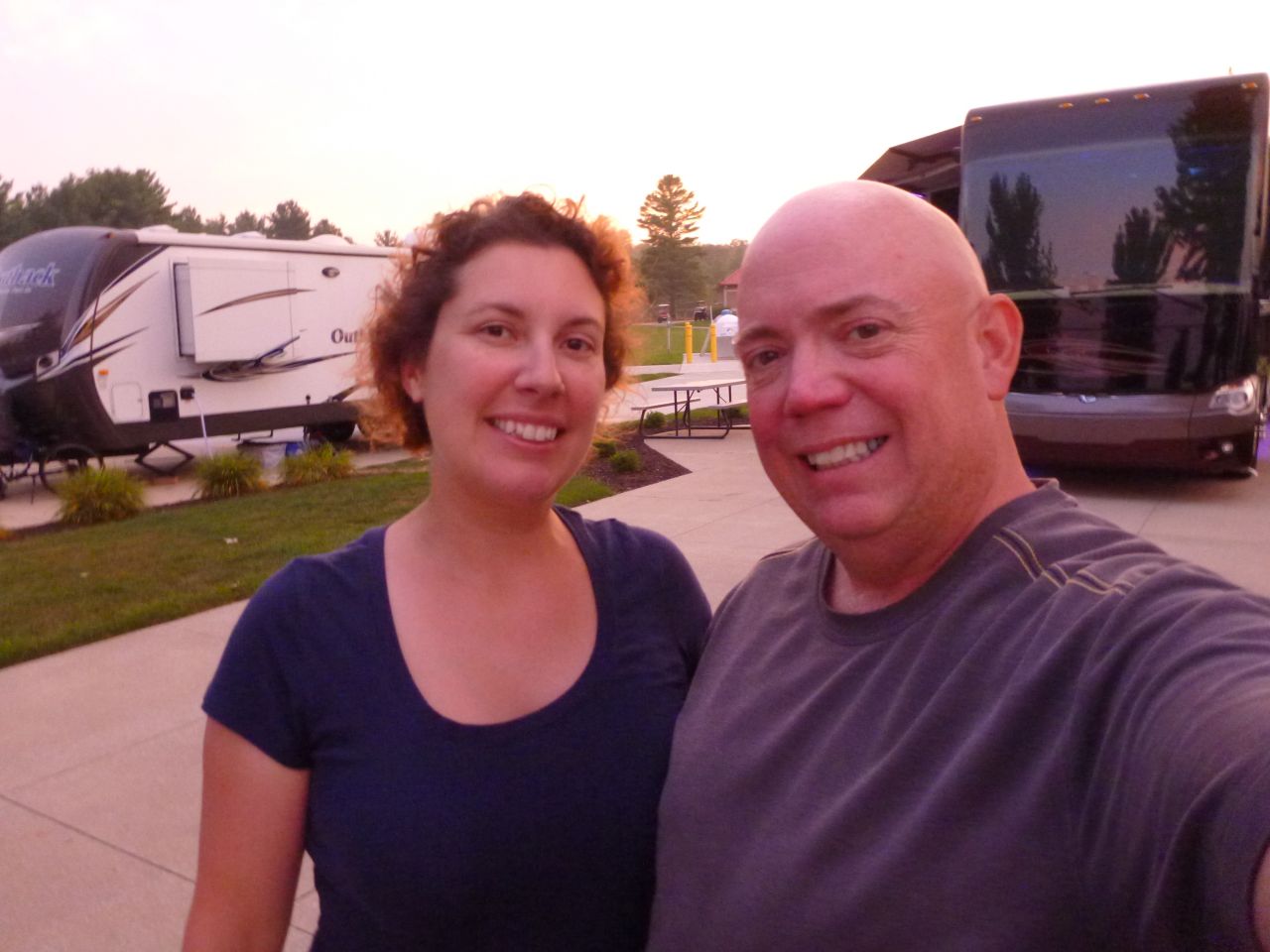 The new management has really improved this resort in the last couple of years. We have not been here before but from what we had heard from other guests, it was more of a party place. Now they have truly raised the bar to make it more of the resort that it should be.

David had an opportunity to fly his quadcopter and produced an outstanding video of the resort. I think it’s one of my favorite videos of a RV Park that he has done thus far.