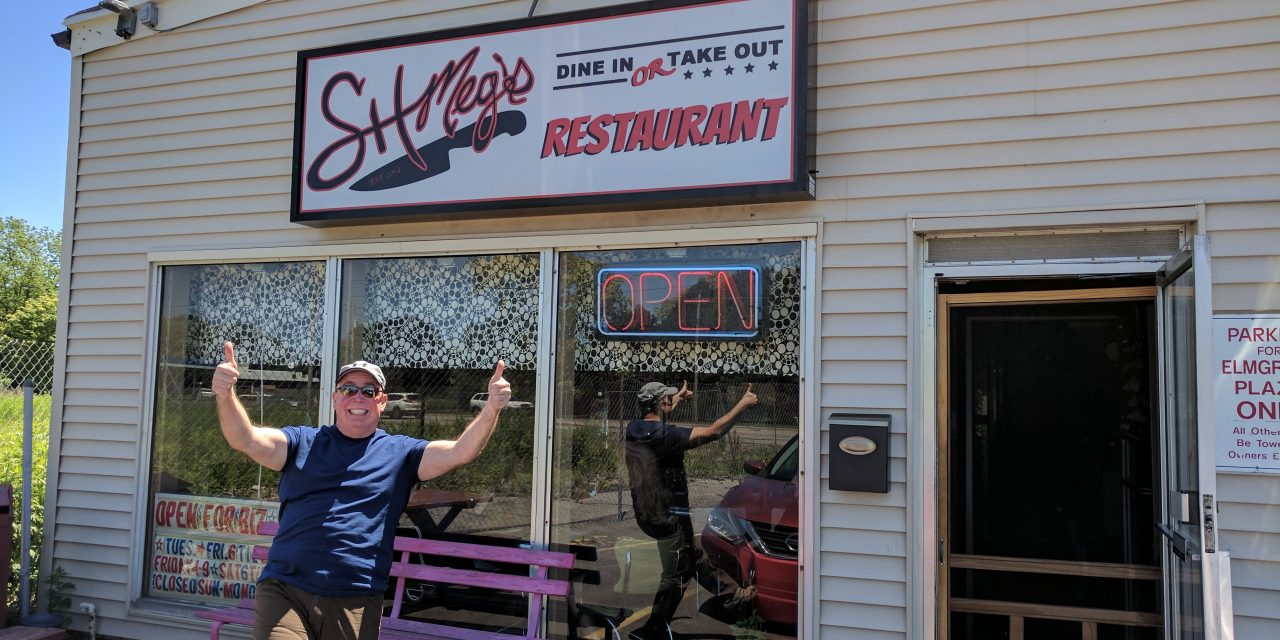 OK…So you know that we like to frequent mom and pop restaurants and help support those that are making it on their own. Shmeg’s is a restaurant that fits that bill to a tee. They opened in 2015 but we were just introduced to their establishment by friends of ours, Mark and Trish.

Their name is as unique as their dishes they serve. Shmeg’s comes from a combination of the owner’s names, Shawn and Megan. Both working in the restaurant industry most of their lives, decided to join forces and open their own establishment. 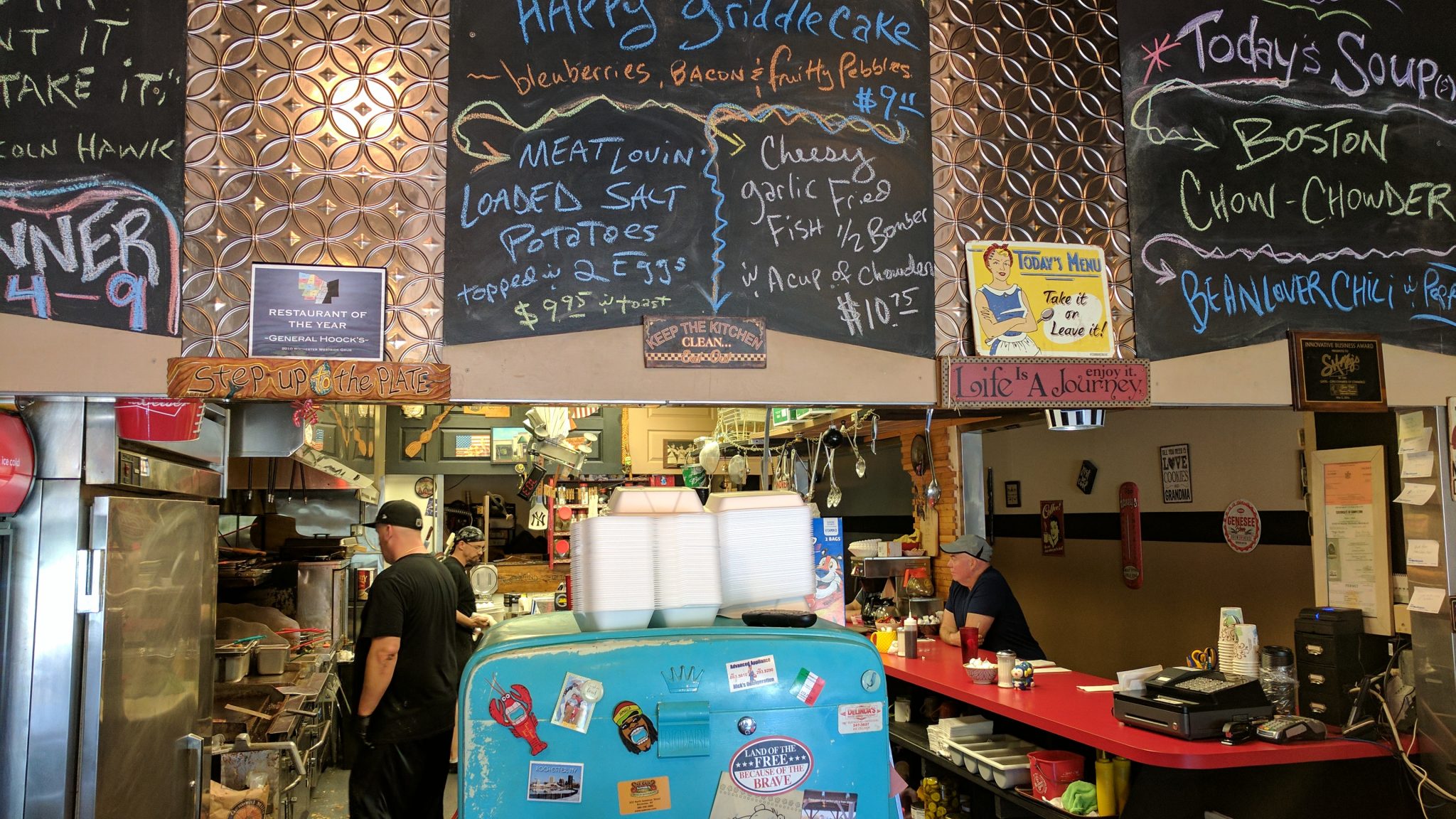 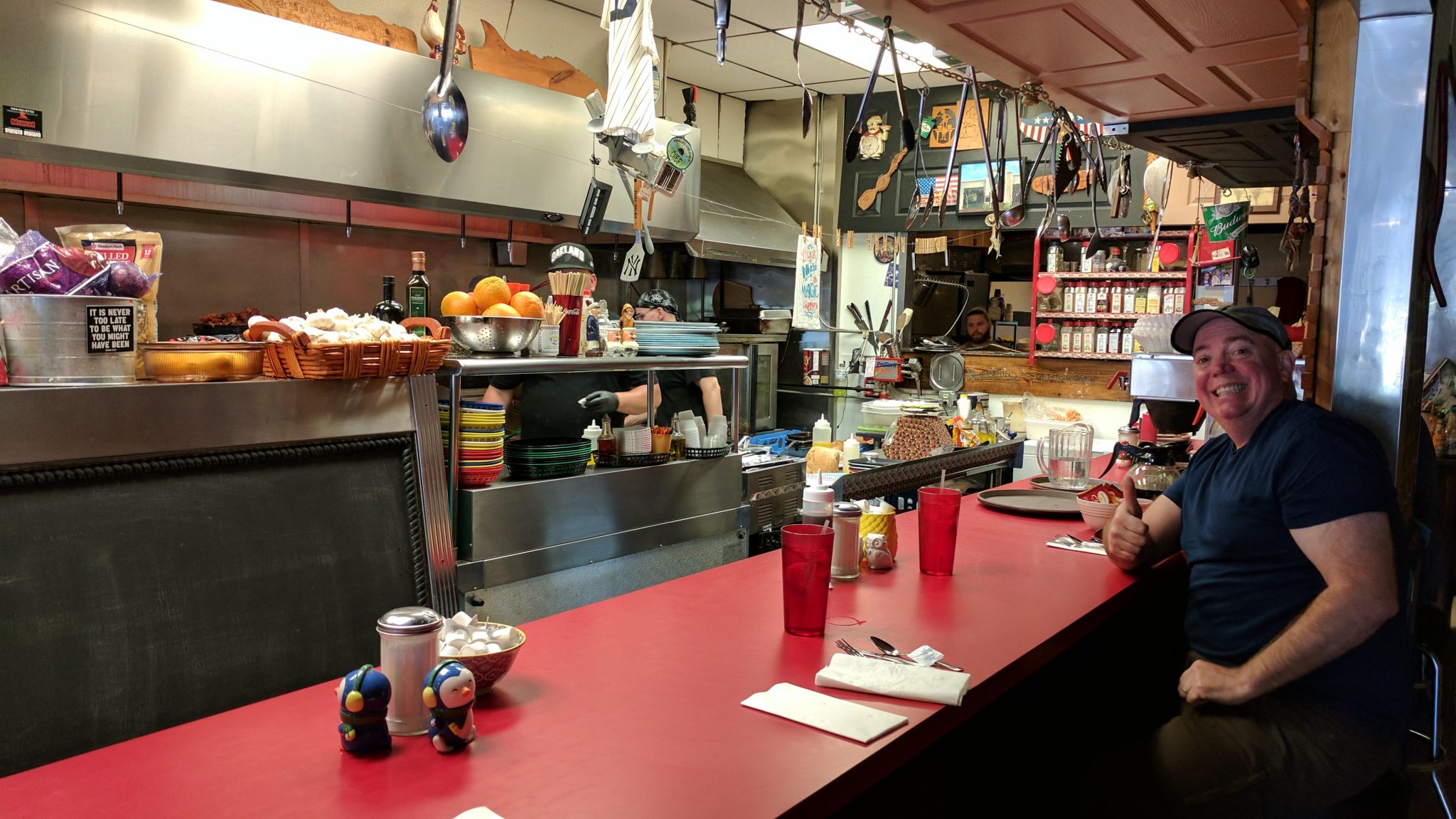 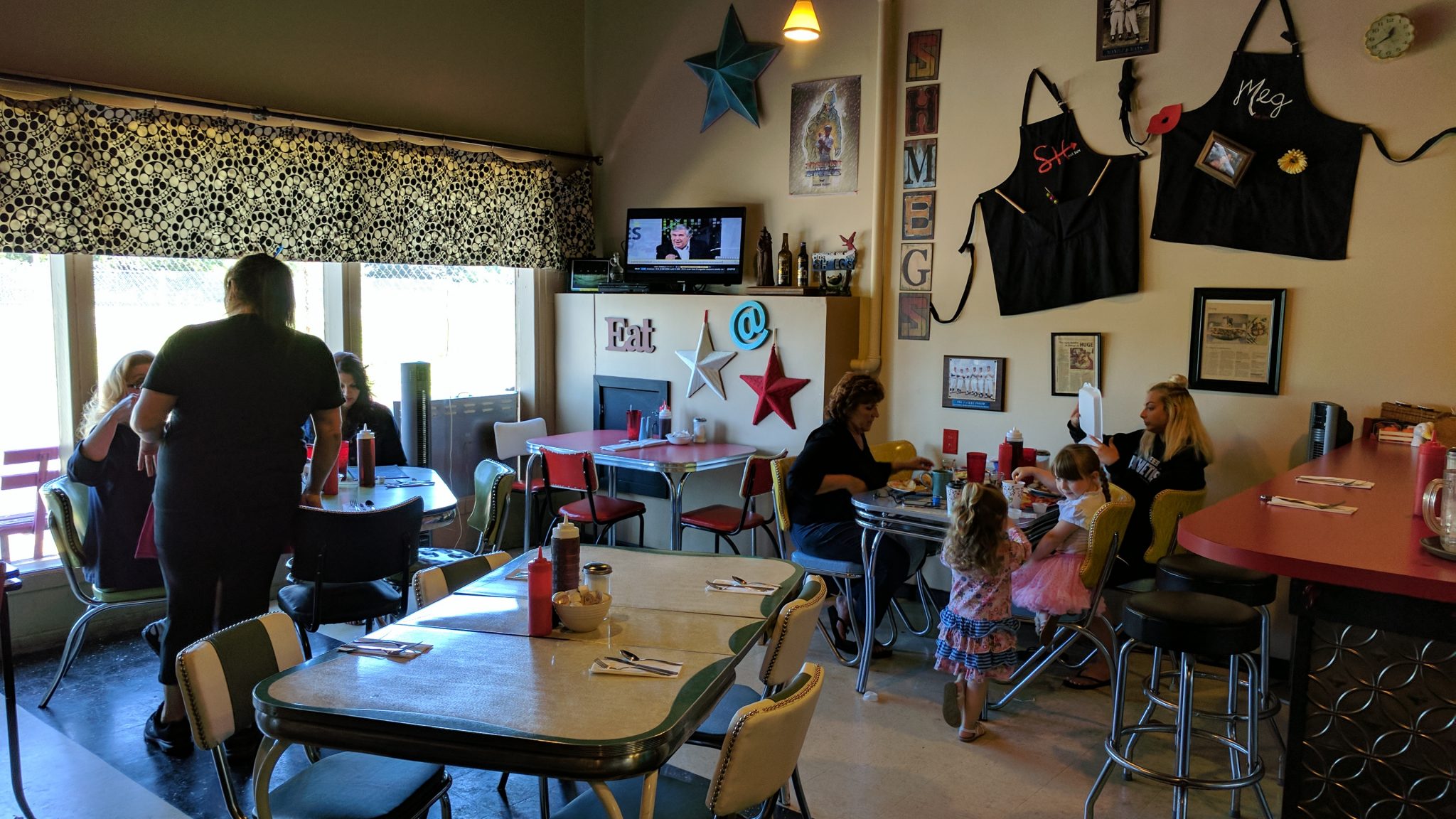 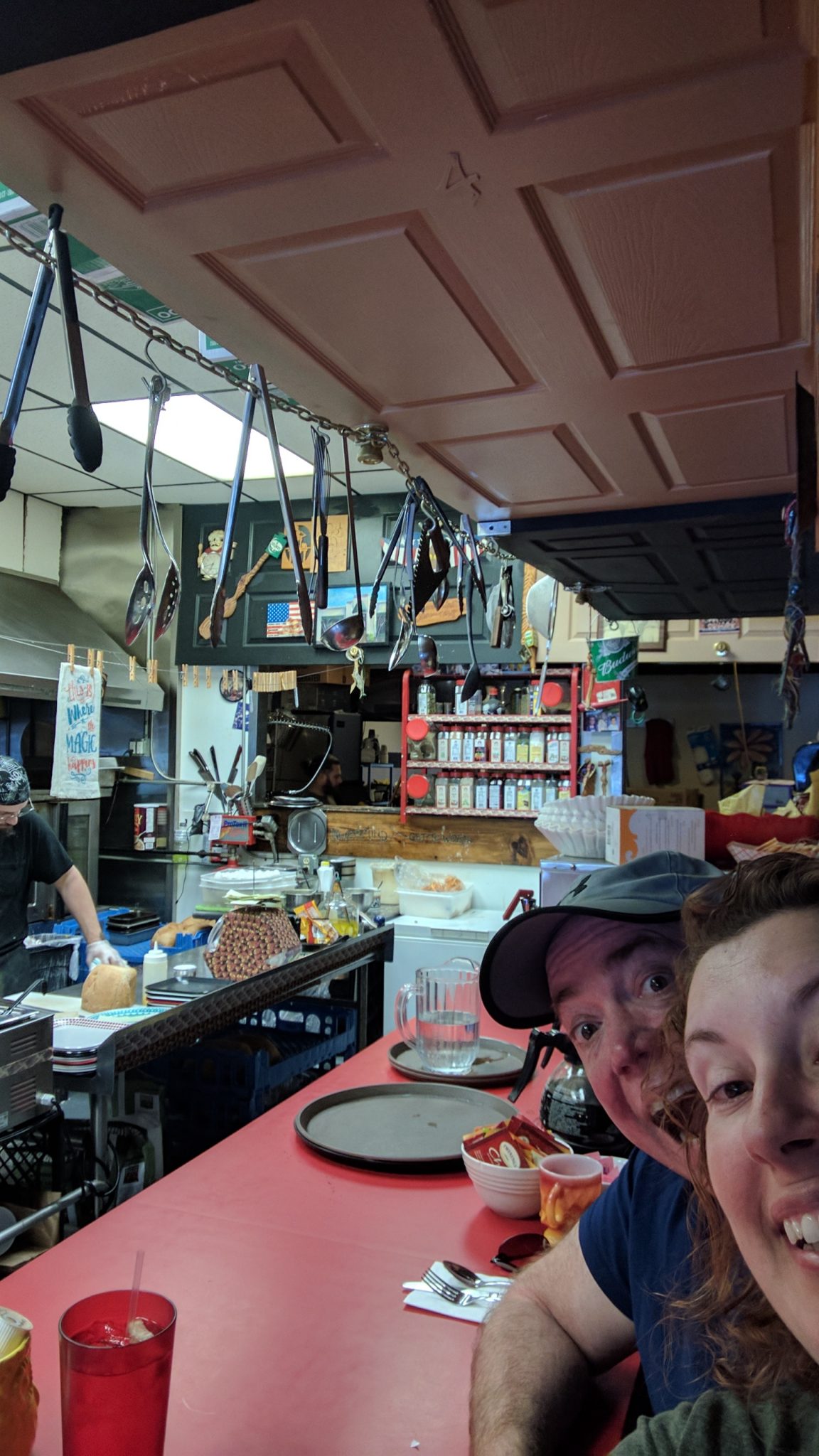 When you first walk into Shmeg’s their eclectic atmosphere and the yummy aroma wafting from the kitchen over whelm you. They have mix-matched tables and chairs throughout the dining areas, there are two, not including the counter. Their daily specials, as well as their “Quote of the Week” are proudly displayed on three large chalkboards as you enter the restaurant. Their menu is hand written and fun to read. Yes, I said fun to read. The names of the dishes as well as the descriptions are drool worthy.

It is an open kitchen so you can watch your food being made.  We like to sit at the counter and interact with the wait staff as well as cooks. Both are happy to talk with you while they go about their business. Everyone is super friendly there, which is a reflection on how Shawn and Megan run things.

While watching all the food come out of the kitchen, we are mentally taking notes on what we will want to order next time. This time, my second visit and David’s first, David ordered the fish sandwich, which was the special of the day. I just got a cheeseburger and fries. While yes, a cheeseburger and fries are pretty basic; the way that Shmeg’s makes them is anything but. David’s fish sandwich was served on a homemade garlic hoagie roll with gooey melty cheese on top. YUM!

We also noticed that above the counter where we were sitting, the ceiling was covered in wooden doors. Eclectic does not begin to describe this place but it’s really the best description I could come up with. 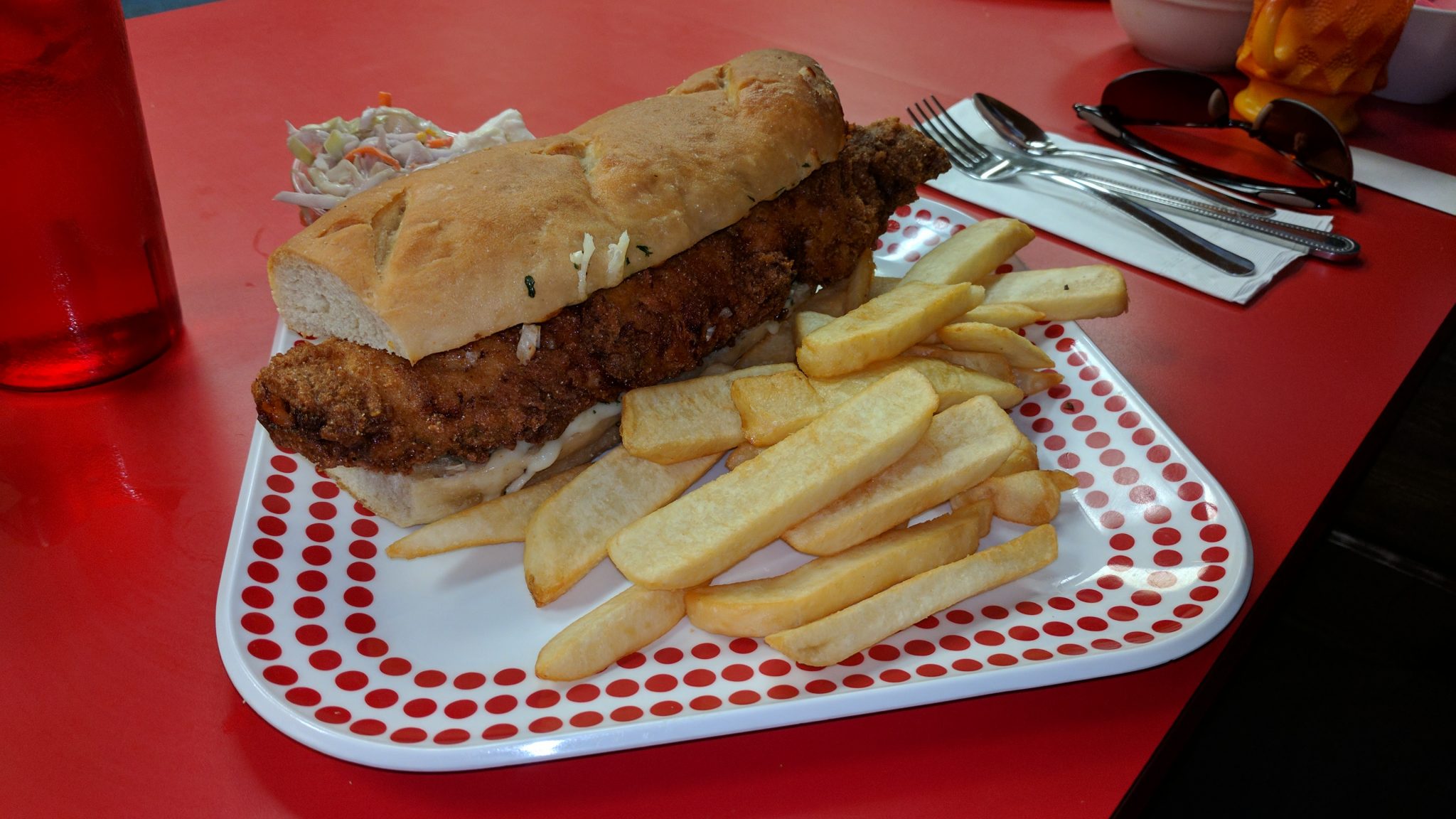 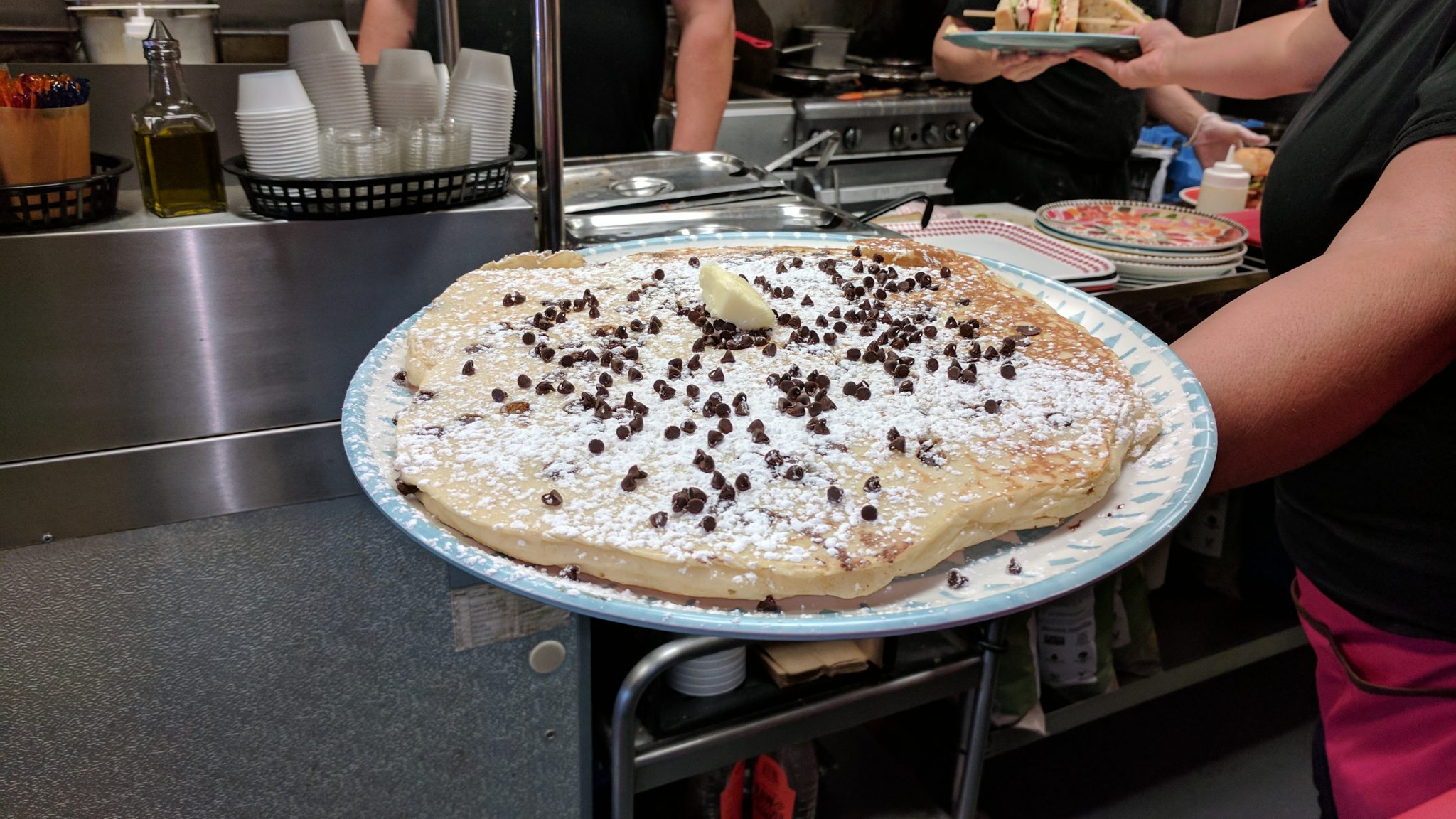 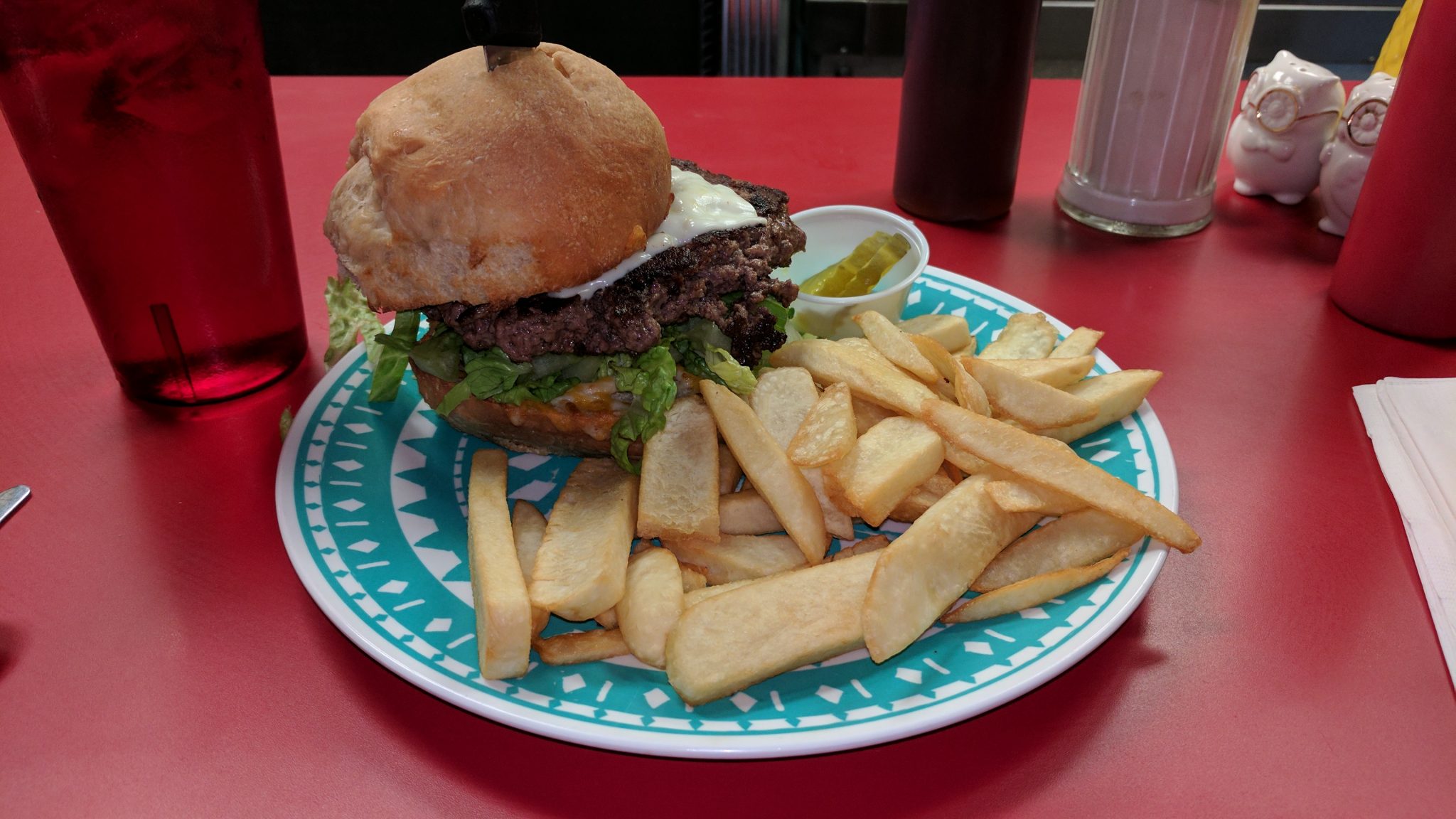 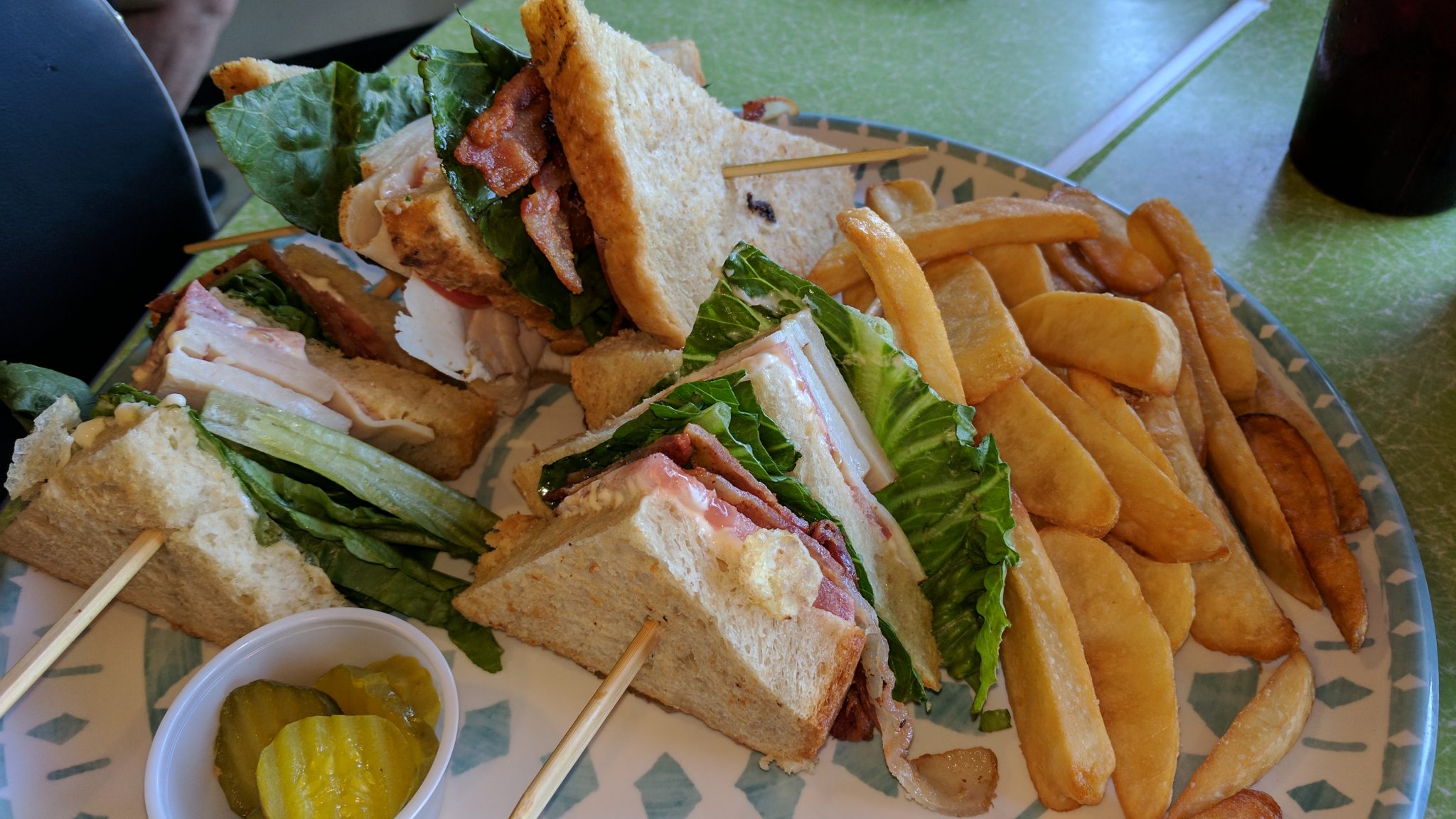 I went back a third time with some girlfriends and this time I ordered the Turkey Club. Umm….it came out on a platter! It was so good! However sadly, I could only eat a quarter of it before I was stuffed. Not to worry though, I took the rest home and David and I ate the rest for dinner that night.

In talking with the cooks, Shawn seems to be the mastermind behind all the creative dishes. Like giant pancakes (that are served on a platter) that, on that particular day, consisted of blueberries, bacon and fruity pebbles. And David said next time he goes he wants to get the McToast, which is French toast made with Shawn’s famous homemade bread encrusted in Kellogg’s Frosted Flakes. I may have to try the Wafflopolous, which is a breakfast sandwich like no other. It consists of two large waffles as the “buns” and eggs, homemade breakfast sausage as well as other things that I just can’t remember right now. Luckily you can order half portions but I’m sure I will be taking most of that home, as I will not be able to finish it. 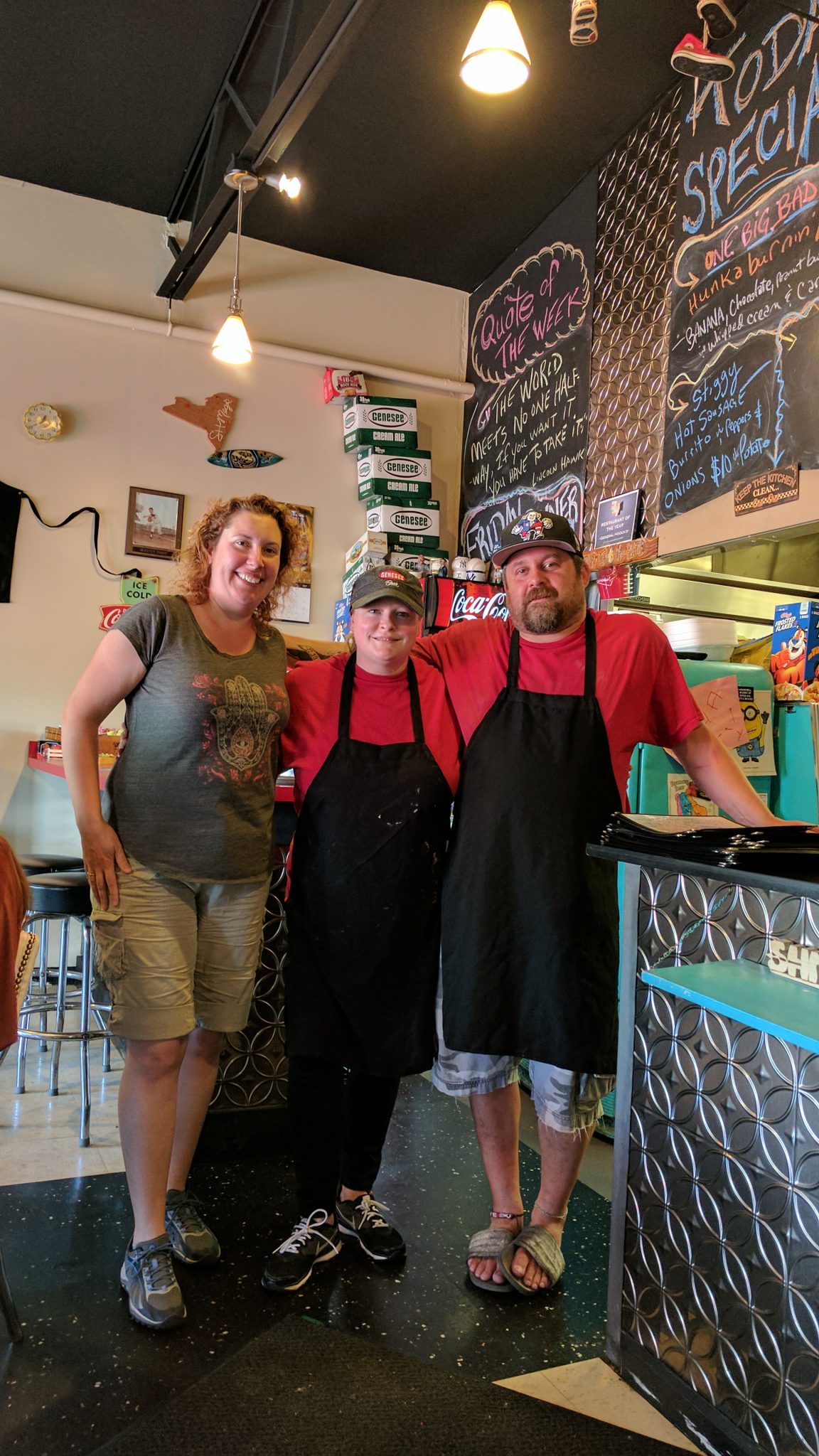 Megan and Shawn and their entire staff are very hard workers. Their personal touches on the atmosphere as well as all the food choices reflect in their commitment to quality and quantity. They have created a great family atmosphere that is fun and oh so satisfying.

We love finding little gems like this and we can easily see ourselves frequenting this place often. It is a good half hour away from us so it’s not as easy to just jump in the car and go and our waistlines thank us for that.

We will definitely be making more trips to Shmeg’s before we leave for the season. And I’m sure when we are on the road, our friends Mark and Trish will be happy to tease us with their Shmeg’s photos.

Now that I have sufficiently made you hungry, I encourage you to go out and find that mom and pop hidden gem where ever your travels may find you. 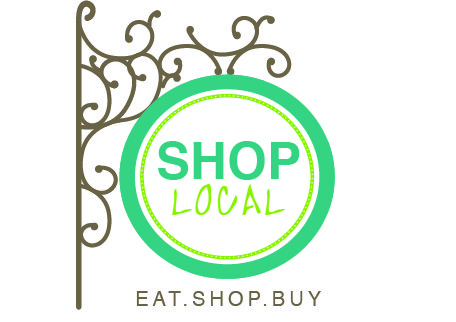