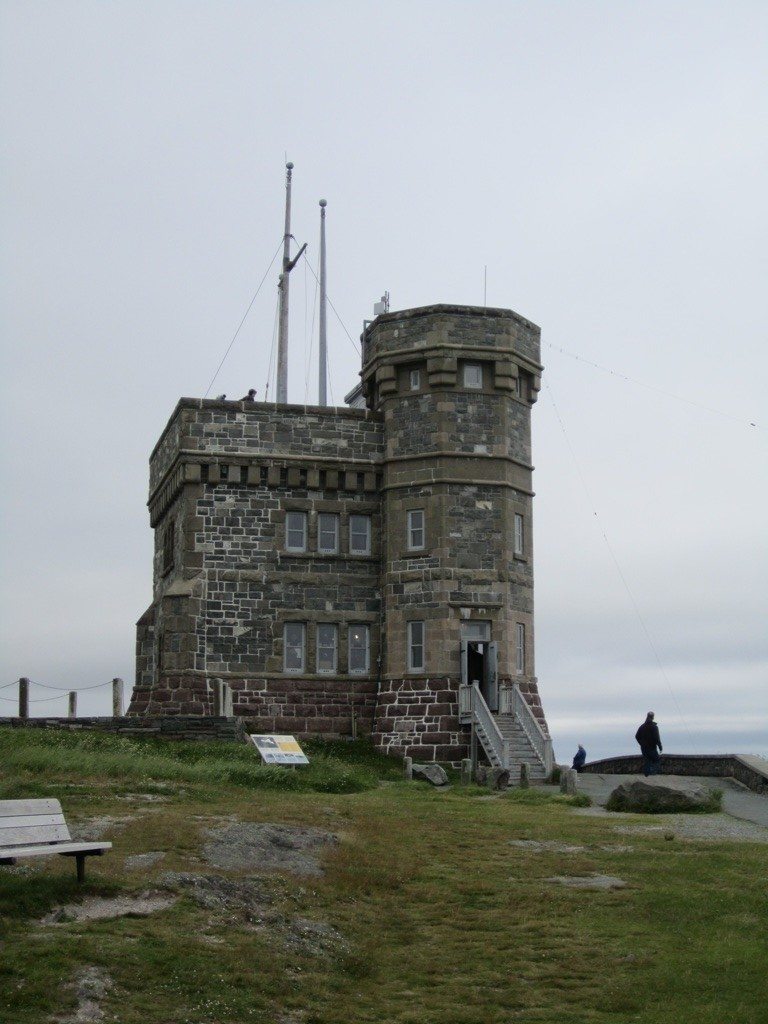 While in St. John’s we visited Signal Hill National Historic Site.  Originally known as the Lookout, this area has long been used for defense, observation and communication since 1704. 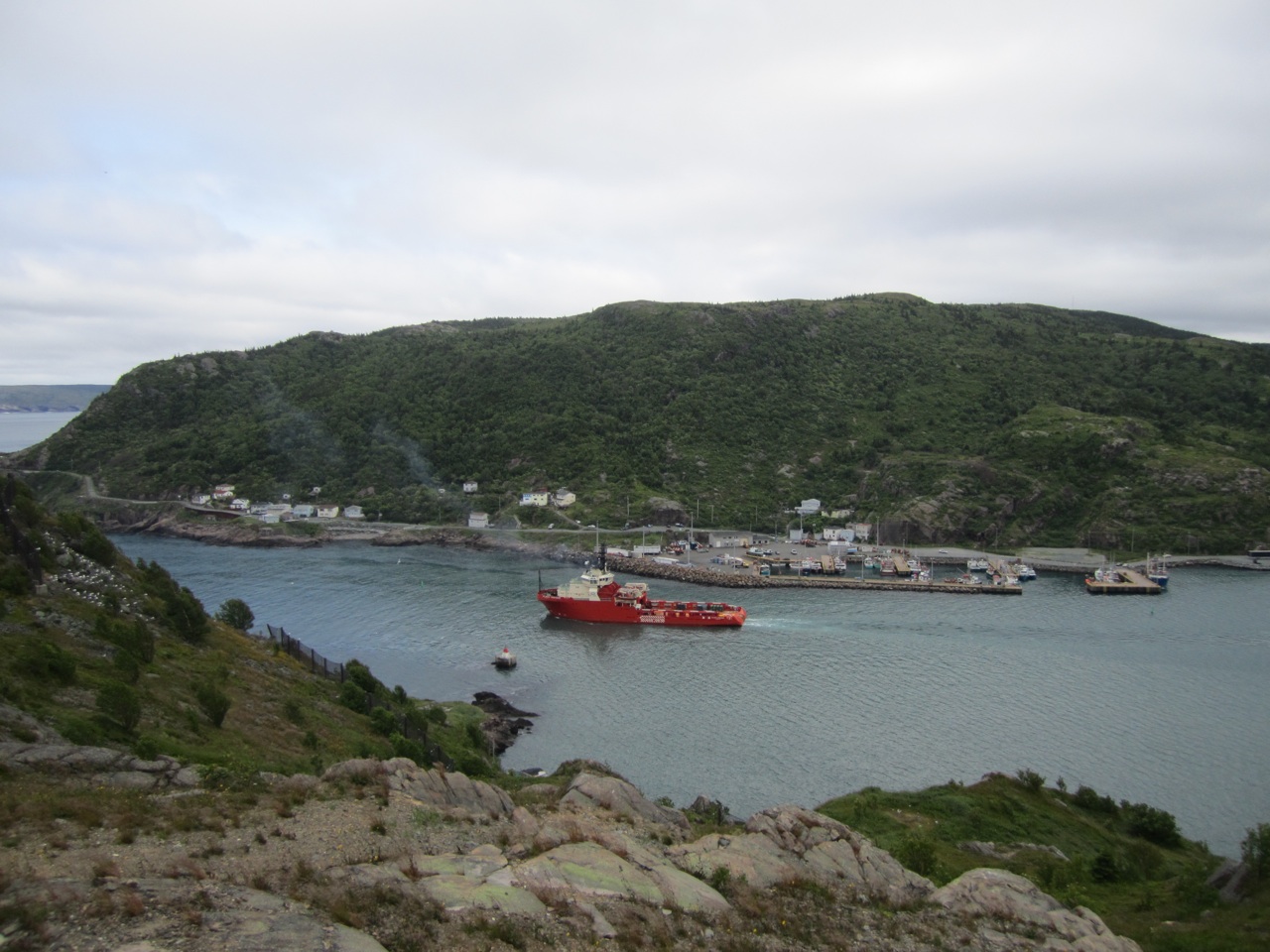 A Ship Going Out To The Ocean From St. John’s Bay

St. John’s Bay only has one way in and one way out.  That is through this rock infested “narrow” to the port.  It is here that signalmen surveyed the ocean for ships headed into St. John’s Harbor.  They would raise various flags to communicate to the military bases below.  This way, they knew if the ships coming into the harbor were friendly or not.

So Signal Hill played a significant roll in defending the bay and who controlled St. John’s.  The museum on Signal Hill has a wonderful video depicting the long history and the battles that were won and lost here.  I’m only touching the very surface of what Signal Hill is all about.  Please read all about it here. 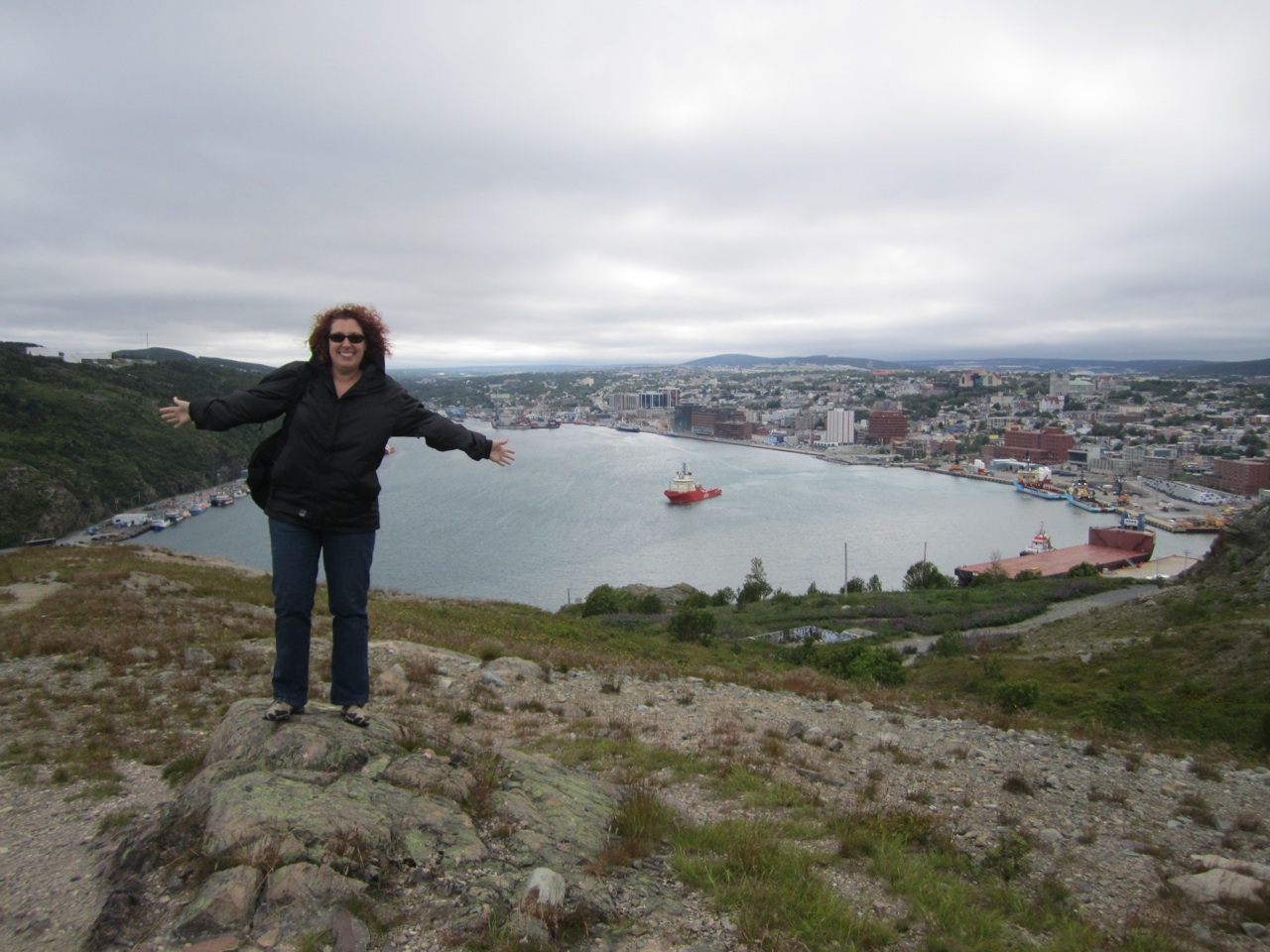 As you can see from my picture, it is very windy up on Signal Hill.  A great vantage point of the city and the port of St. John’s. 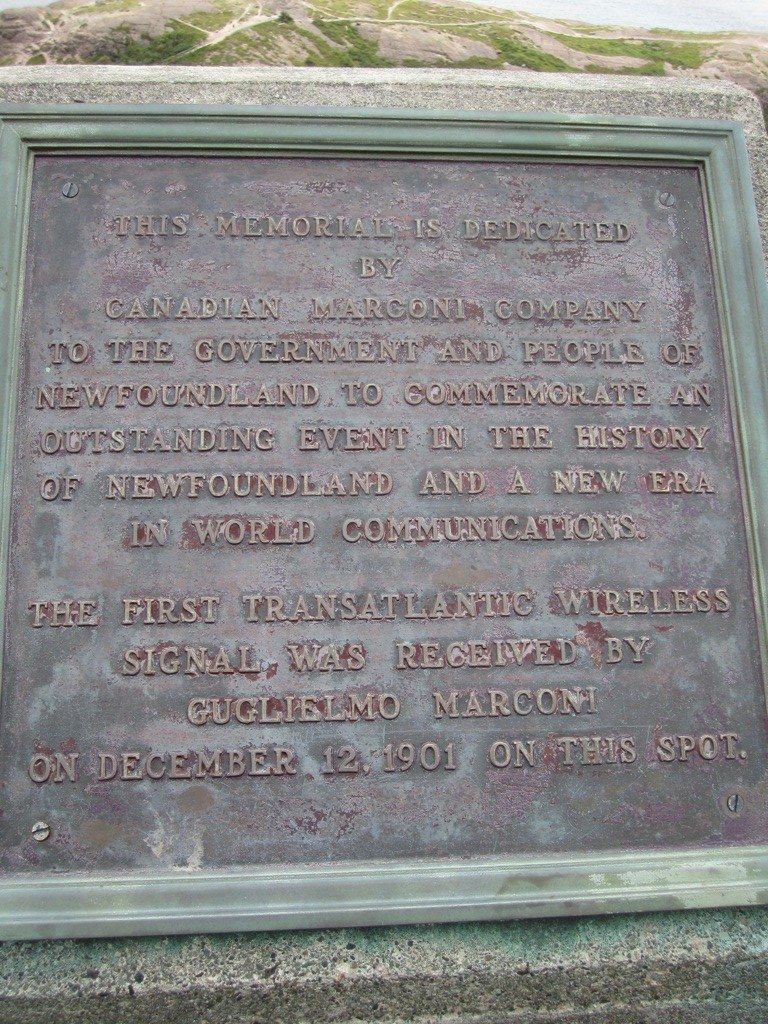 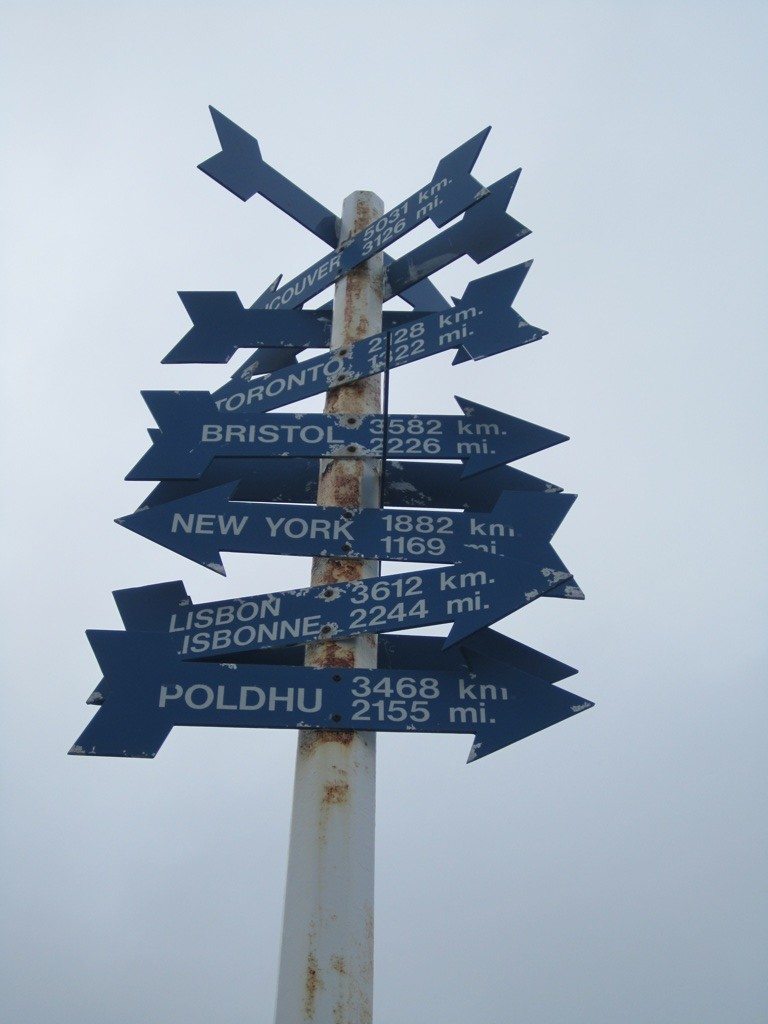 Signal Hill has this sign post that tells you which way and how far certain cities are from Signal Hill.  As you can see, New York is over 1100 miles away.  We are certainly a distance from home. 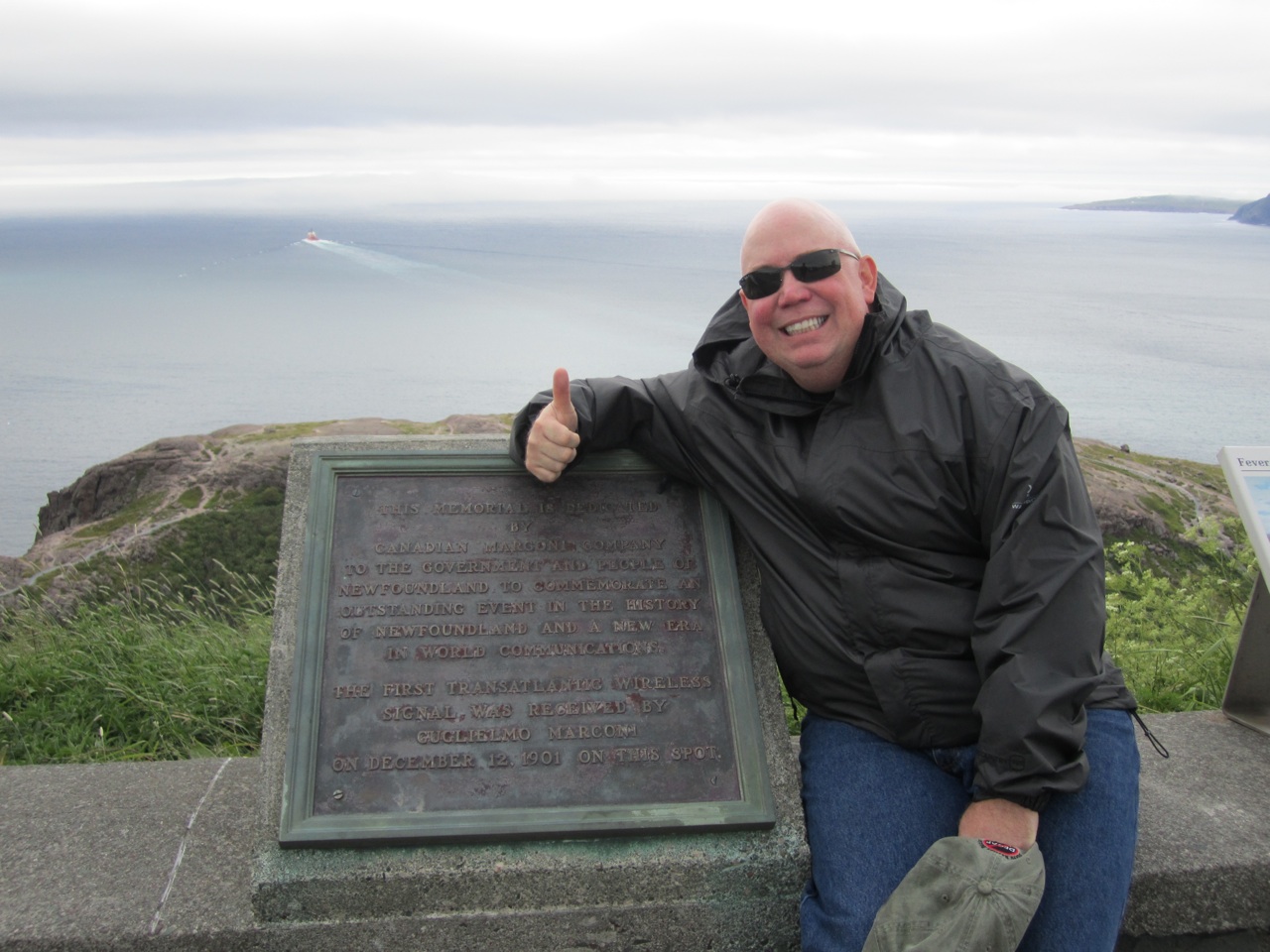 We were amazed to find out that Signal Hill, on top of being a military strategic vantage point, was also the place that the first ever Transatlantic wireless signal was received.  This was back in 1901!

And you thought wireless communications was something recent. 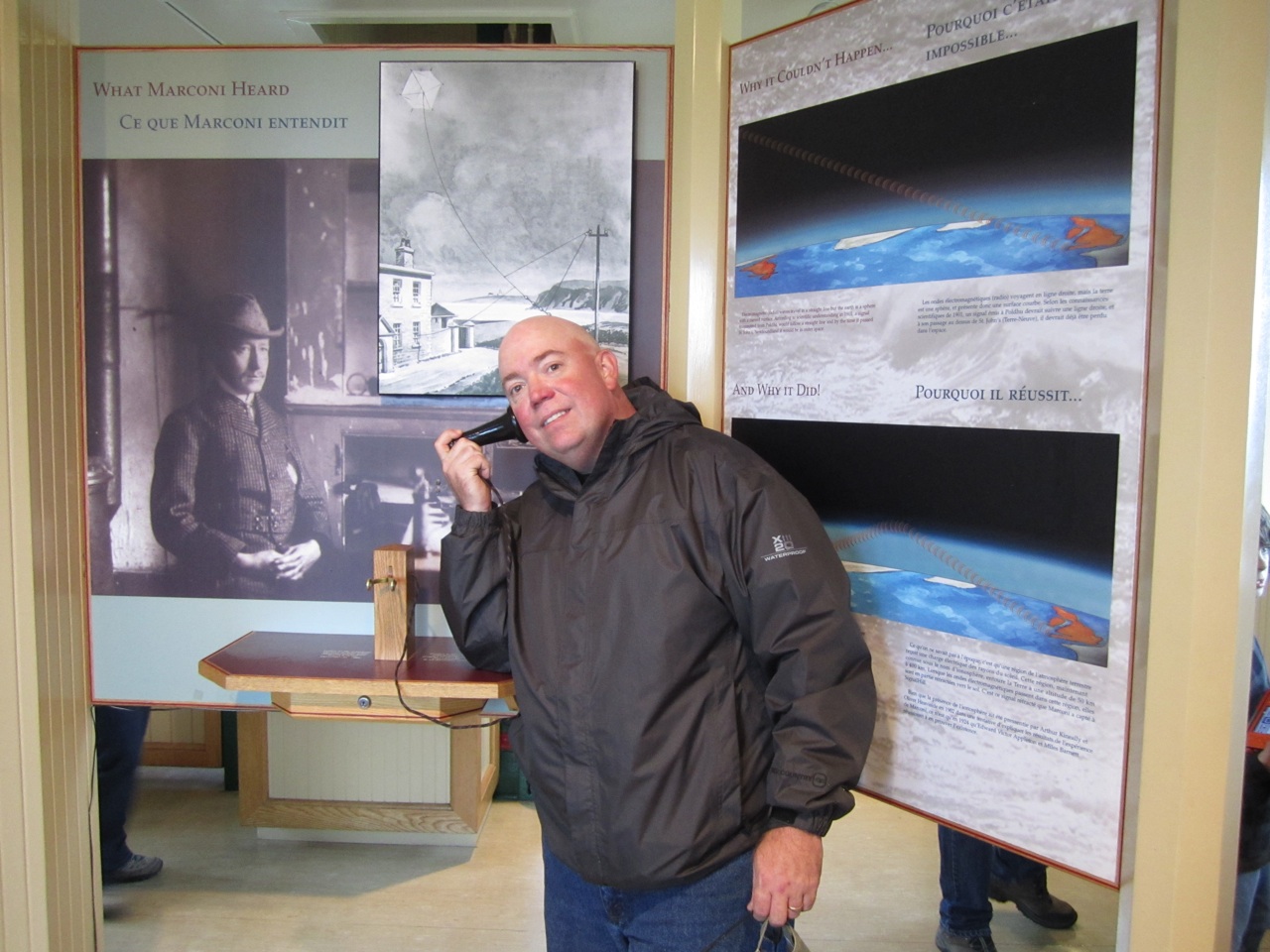 David Listening To What The Morse Code Wireless Signal Sounded Like Back In 1901.

They had a demonstration of what the Morse code, wireless signal sounded like back then.  As you may see from the pictures behind David, Guglielmo Marconi figured out that you could bounce the signal off the atmosphere to make it go further.  People back then did not think this was possible.  Marconi proved them wrong.  And thus our modern day wireless communications can be attributed all the Mr. Marconi. 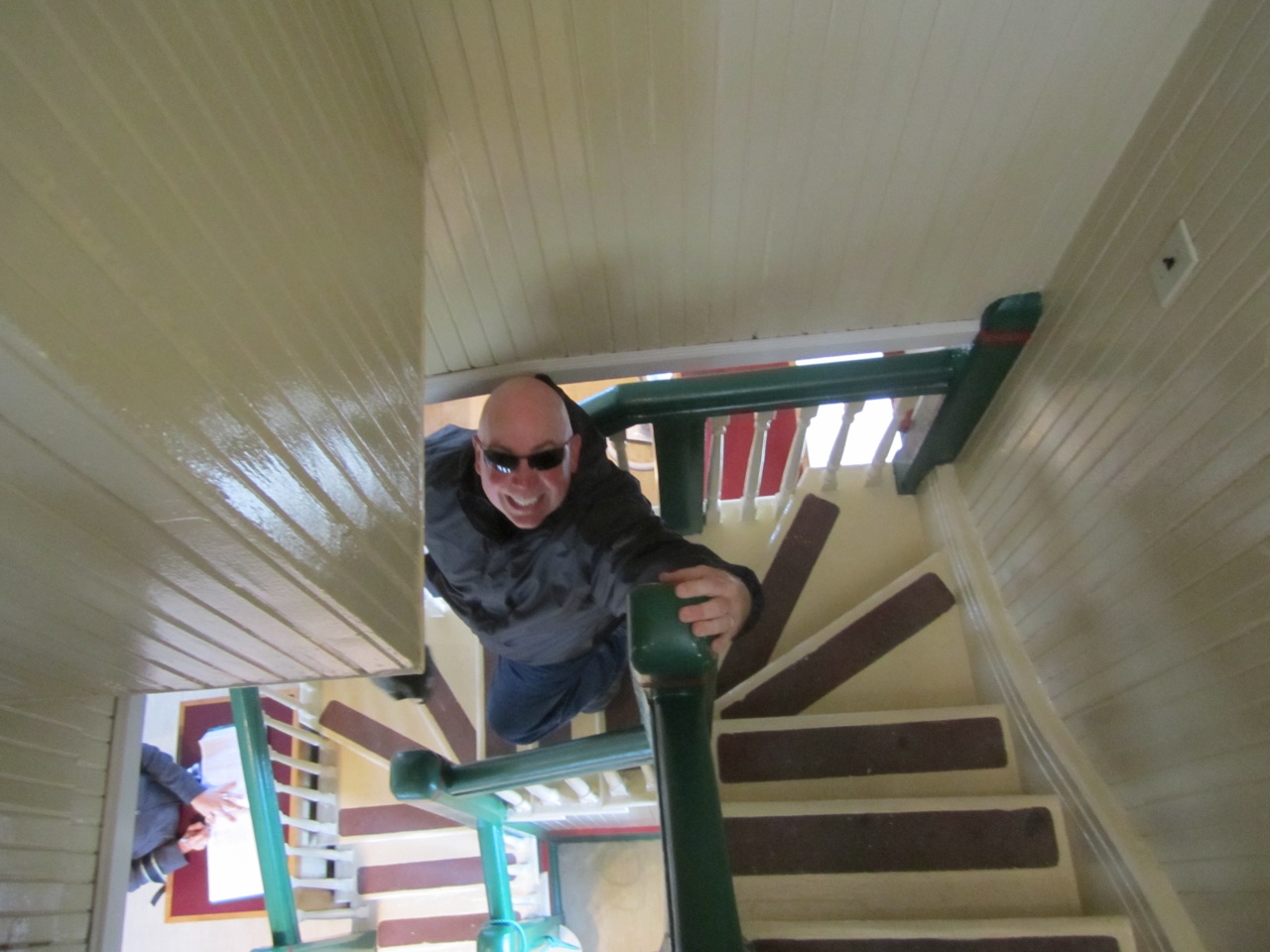 David Going Down The Narrow Staircase In The Tower.

Cabot Tower had some great views. The stairwell was a little narrow though.

The tower was built in 1897 to honor Queen Victoria’s Diamond Jubilee and the 400th anniversary of John Cabot’s “Voyage of Discovery”. John Cabot was the explorer that discovered this area. I’m not sure if I have mentioned that before. So their you go, now you know. 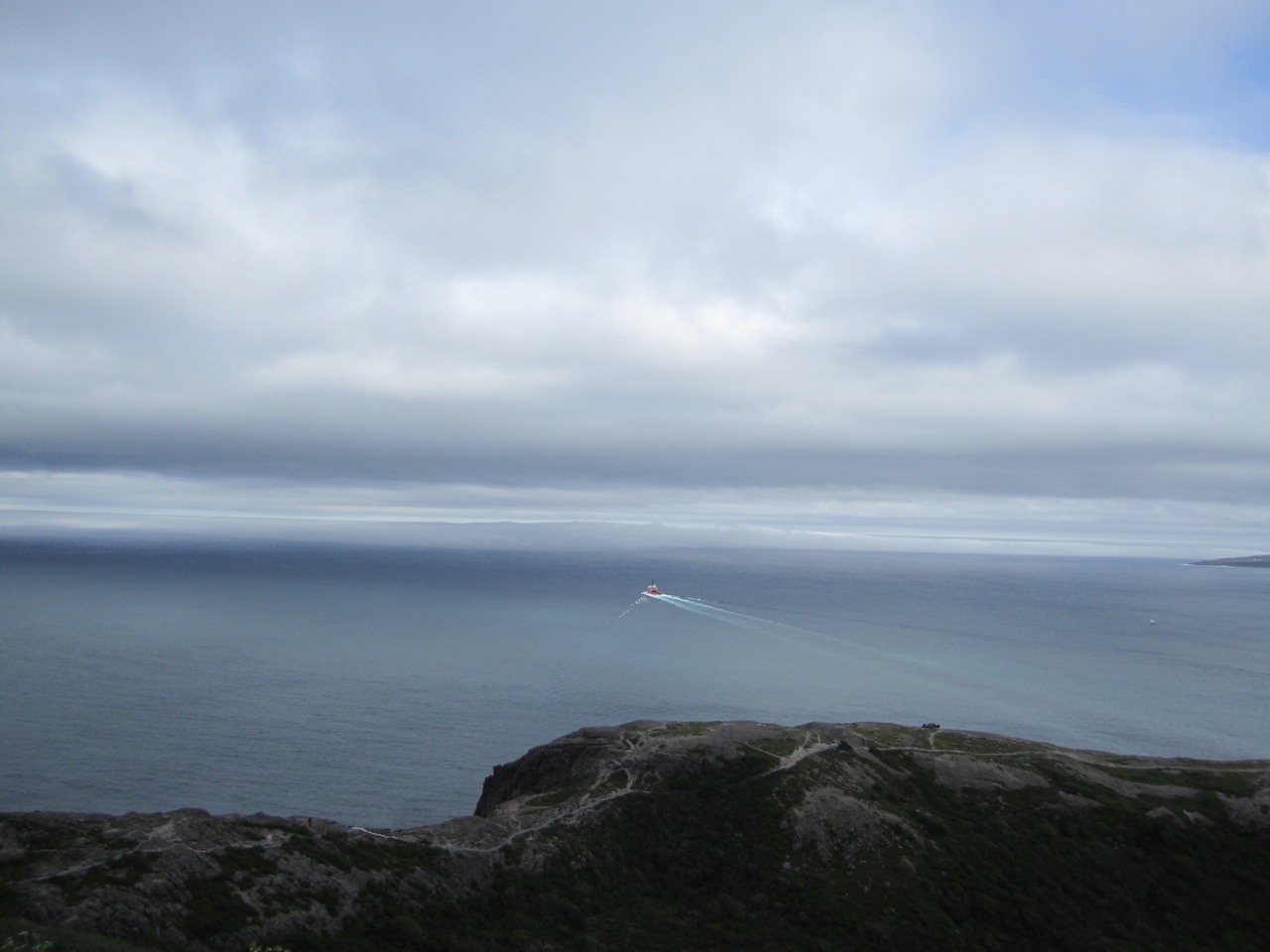 A Ship Going Out Into The Ocean, Into The Fog 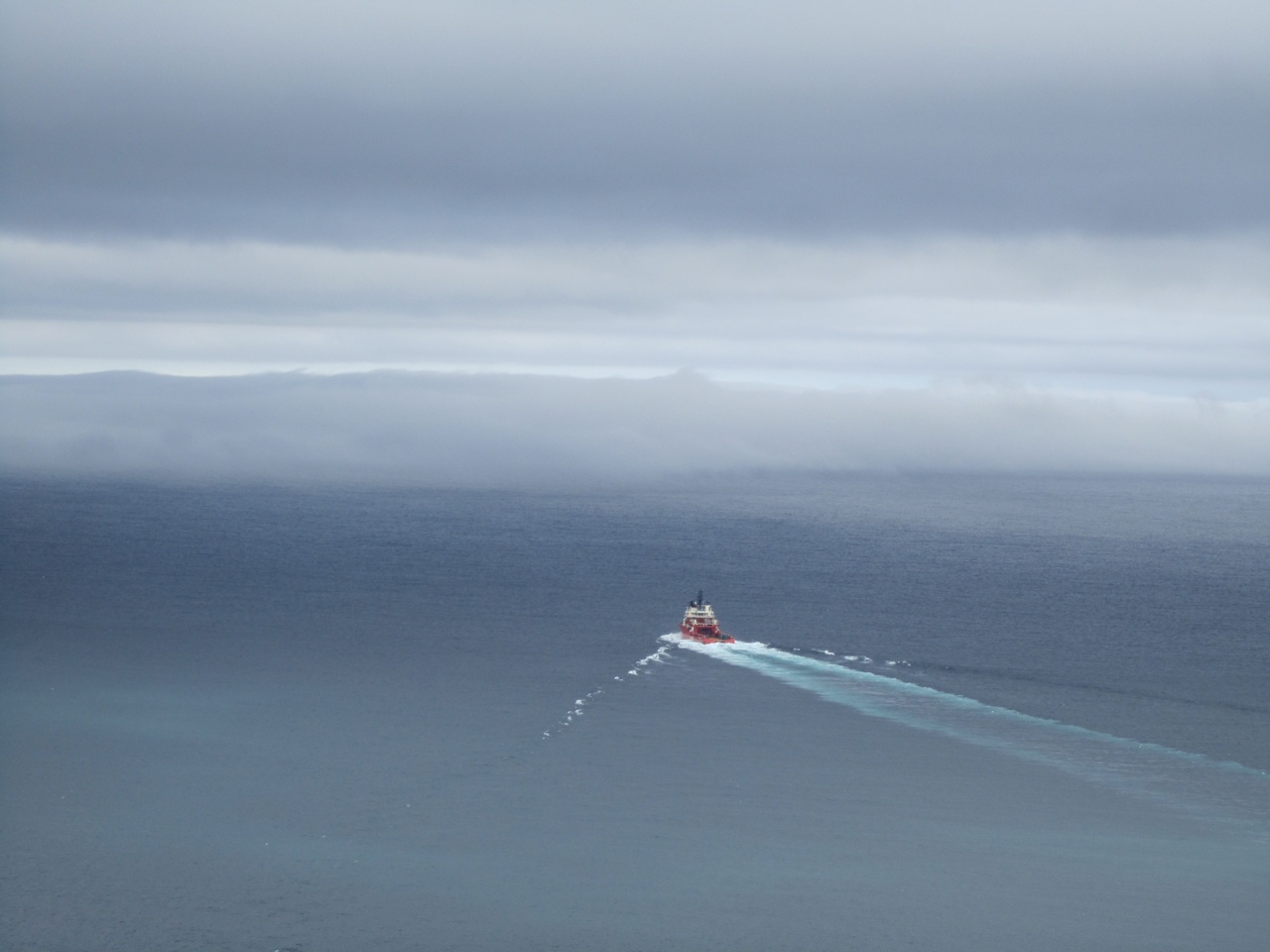 A Ship Going Out Into The Ocean, Into The Fog

This ship was pretty going into the fog.  The sun was hitting it just right. 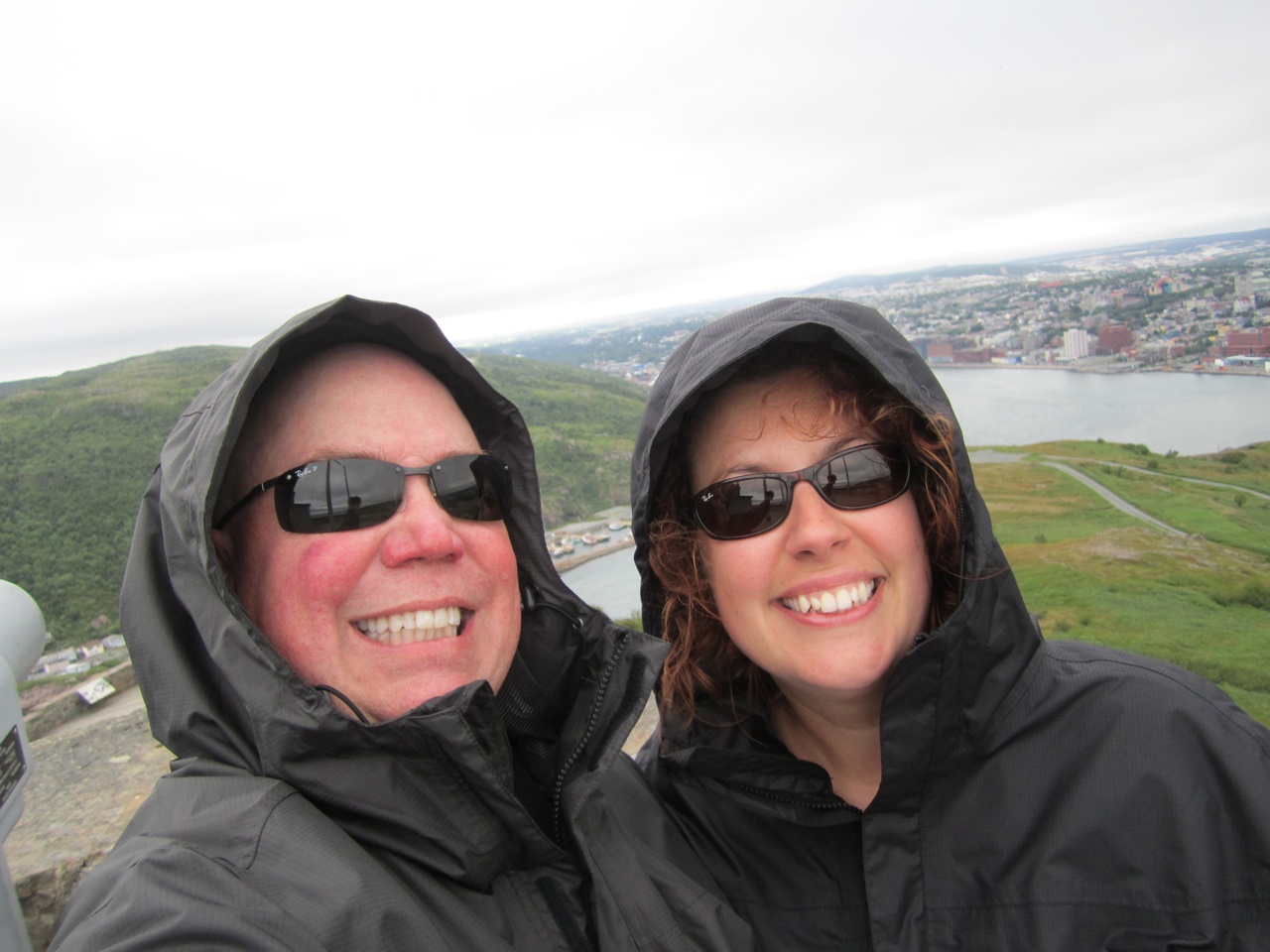 Signal Hill was a nice stop in St. John’s.